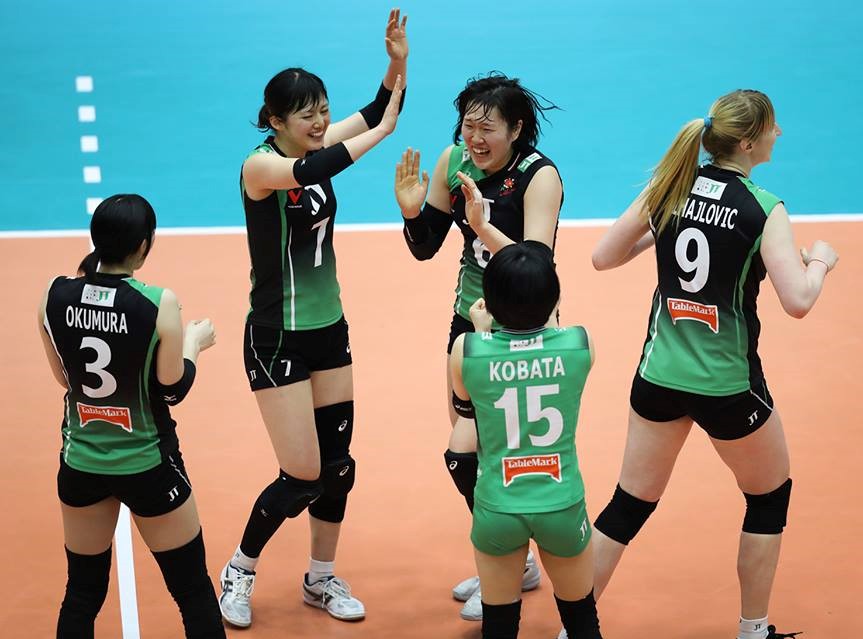 For Sunday’s Japanese Women’s V.League matches, there were only two games played in Tokyo’s Ota Ward Gymnasium. First was the... Current Photo via Japan V.League

For Sunday’s Japanese Women’s V.League matches, there were only two games played in Tokyo’s Ota Ward Gymnasium. First was the undefeated Hisamitsu Springs facing Toray Arrows. Hisamitsu after their long five set match with Toyota Auto Body were not looking past the Arrows. The Springs took a close first set, but Toray jumped out to a 5-0 lead in the second and Hisamitsu never caught up, which tied the match at one set all. In the third and fourth sets, the Springs got an early lead and kept extending it to win the match 3-1. Hisamitsu goes to 23-0 on the season. Foluke Akinradewo of the Springs led all scorers with 20 points (16k, 4b). Yuki Ishii with 19 (18k, 1b), Rika Nomoto 13 (12k, 1a) and Nana Iwasaka 13 (10k, 3b) each hit double figures for Hisamitsu. For Toray, both Kadie Rolfzen (18k, 1b) and Ai Kurogo (19k) had 19 points in the loss.

In the other match JT Marvelous met Toyota Auto Body Queenseis in a five set match. The marvelous had a 2-0 sets lead and looked likely to win in three. However Toyota flipped the script for sets three and fourth with a dominating 25 point swing (50-25) in the Queenseis favor. Surely the Queenseis would take the fifth set, right? No, they could not catch JT who held an 8-6 lead at the swapping of ends and Toyota could only get within one point at 11-10, before the Marvelous ended with a 4-1 run to win the match 3-2. This loss might keep the Queenseis from making the Final 3 after two straight five set losses. Also, Toyota outscored both Hisamitsu and JT in those losses. Neriman Ozsoy of Toyota led all scorers with 32 points (26k, 4b, 2a) in the loss. Her teammate Erika Araki had 4 blocks to go with 9 kills for 13 points. Serbian Brankica Mihajlovic for the Marvelous had 31 points (29k, 2b) in the win. Yuka Kanasugi also had 17 (12k, 3b, 2a) for JT.