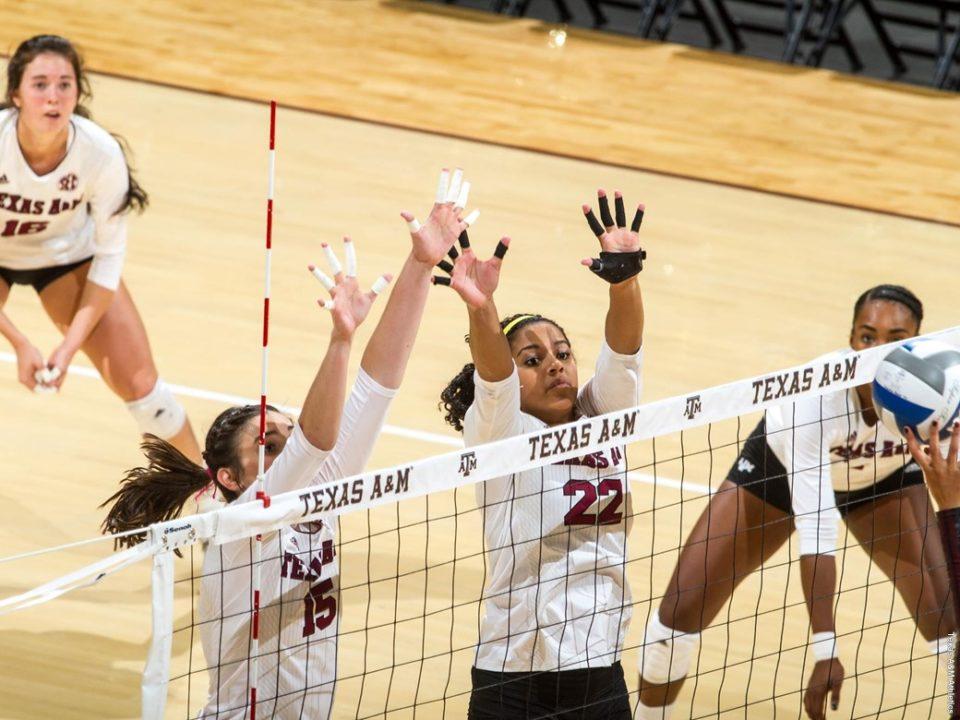 AUBURN, Ala. – Texas A&M middle blocker Jazzmin Babers entered the regular season finale against Auburn needing only four blocks to break the school record of 552 career total blocks. The senior, who has started all 121 matches throughout her career, finished with 11 blocks to help lead the Aggies to a 19-25, 25-12, 25-21, 25-23 victory today at Auburn Arena.

Texas A&M completes the regular season 21-8 overall and 15-3 in Southeastern Conference play and finishes in at least a tie for third place in the final SEC standings. Auburn suffers its fifth consecutive loss in the series against the Aggies and ends its season 15-16 overall and 9-9 in SEC matches.

Babers, who earlier this season became A&M’s all-time career leader in block assists and passed Cindy Lothspeich (1994-97) to break the career total blocks record, led the Aggies to 20 blocks on the day, breaking the team record for most blocks in an SEC match. The Aggies, who tied the school SEC record with 32 block assists, also set a team SEC season record as they finished the conference season averaging 3.0 blocks per set.

The Aggies got off to a sluggish start and were outhit .216 to .207 in the opening set. The score was knotted at 12-12 before the Tigers got a kill courtesy of an A&M overpass and then served back-to-back aces to take a lead they would not lose. Auburn later used a 3-0 run to go up 21-16 before a kill and a block by Kaitlyn Blake put A&M within 21-18. The Tigers then went on another 3-0 spurt, including a fifth ace that put Auburn serving for the set, 24-18. McGee put down her fifth kill before Auburn closed out the set with a kill.

The second set was tied at 3-3 when A&M caught fire, scoring seven unanswered points to take a 10-3 lead. The Tigers cut the deficit to 14-11 before a kill by McGee and a record-setting block by Babers and setter Stephanie Aiple began a 5-0 surge by the Aggies. A service error ended the run but McGee immediately put down her fifth kill in five attempts in the set to ignite a set-ending 6-0 run. Babers and Emily Hardesty teamed for a block to cap the win and even the match at a set apiece. It marked the sixth block of the set for A&M, which hit .500 while holding the Tigers to a -.097 hitting efficiency.

A&M held its largest lead of the fourth set at 14-9 when Auburn began a comeback. The Tigers eventually tied the score at 18-18, but a block by Aiple and Blake, an Auburn attack error and an Ashlie Reasor roll-shot kill put the Aggies ahead, 20-18. The Tigers countered, getting a solo block and two kills during a 4-0 run that put Auburn on top, 22-21, giving the Tigers their first lead since 5-4. Hardesty tied the score with her team-leading fourth kill of the set, and Blake and McGee tallied A&M’s seventh block of the frame to return the lead to A&M, 23-22. Auburn’s Brenna McIlroy answered with her sixth kill of the set, but the Tigers served long to put A&M at match point. Auburn seemed to fight off match point as McIlroy appeared to have gotten a kill as the ball landed inside the A&M baseline, but A&M coach Laurie Corbelli challenged that the ball had sailed outside the antenna. Upon further review, the Aggies won the challenge to end the match.

The Aggies, who ended the regular season having won 15 of their last 17 matches, are expecting to receive a sixth consecutive and 24th overall berth into the NCAA Championship. The 64-team field will be announced Sunday, Nov. 27, at 8 p.m. on ESPNU.

On overcoming the slow start to get the victory…
“I am really relieved that this match is over. It was really a struggle most of the way through. I thought we started really flat. Emotionally it seemed really hard to get really excited and super high for this one, for whatever reason. I was really proud of our attackers. I thought Kiara McGee came ready to play in a really strong fashion. [Ashlie] Reasor did some awesome things, and she just needed a match like this to get her confidence up and let her see herself as the great player she is. As always, I think Steph Aiple directed the offense beautifully, and Jazz Babers with no errors, and with all the blocks that we had. Our blocking is only getting better and better, and that is really a highlight for me. At the end of the season that’s what we really like to have happening.”

On Babers setting another blocking record…
“She is definitely going to be hard to match in terms of blocking with any future players because of how instinctive she is with her blocking. She is a very smart blocker. We will really miss that next season. She is much deserving of that career record.”

On thoughts finishing the regular season and awaiting the NCAA announcement…
“I feel a sense of relief that we have made it through the SEC grind, and we have a day off to rest and rejuvenate and get a new start on somewhat of a new season with the NCAA tournament. I have no clue what the NCAA Selection Committee is going to do. We always have our feelings about it, but I just prefer and wait and not even think about it until we see it.”

The Tigers conclude the season with a 15-16 overall record and 9-9 in Southeastern Conference play. That league record placed Auburn tied for fifth overall, which marks the best finish in the SEC since 2010 when the Tigers also finished tied for fifth.

Auburn had four student-athletes with double-digit kills in the match. Sophomore Brenna McIlroy led the way with 15 kills, while freshman Gwyn Jones, senior Breanna Barksdale, and junior Macy Reece each had 10. Junior setter Alexa Filley had a match-high 47 assists.

Defensively, junior libero Jesse Earl had a match-best 16 digs and McIlroy chipped in 10 for her 12th double-double of the year. Both Earl and McIlroy led the Tigers with three service aces each.

Texas A&M (21-8, 15-3) was led by Kiara McGee with 16 kills, while Ashlie Reasor and Emily Hardesty had eight a piece. Setter Stephanie Aiple finished 39 assists and Victoria Arenas had 13 digs. Jazzmin Babers had a match-high 11 blocks with eight going to Kaitlyn Blake.

A kill from Barksdale and one by Enija Bidzane lifted the Tigers to an 8-5 lead in the first. A kill from McIlroy followed by back-to-back aces from the Garland, Texas, product pushed Auburn to a 15-12 advantage and another Bidzane kill sent the Tigers on another run, making 21-16. An Earl ace gave AU set point and a Barksdale kill sealed the set, 25-19.

TAMU used long rallies to put together a solid showing in set two. The Aggies went ahead 10-3 before the Tigers responded with a run to come within three, 13-10. Texas A&M, however, used a pair of six-point runs to take the set, 25-12.

A Barksdale kill and a solo block from Reece tied the set at six and Aggie errors lifted Auburn to a 10-9 lead in the third stanza. TAMU responded with a 4-0 run to go up 13-10 and pushed for a 17-13 lead. The Aggies held its advantage to the end of the set, winning 25-21.

A pair of kills from Barksdale led to a 5-4 AU lead in the fourth. A tough defensive presence for the Aggies at the net lifted the visitors to a 14-9 lead, but a kill from Jones sent the Tigers on a run to cut the TAMU lead at 15-13. A handful of Aggie errors tied the set at 18 apiece and a pair of McIlroy kills gave Auburn a 22-21 advantage. Texas A&M used its strength at the net and pushed to take the match, 25-23.