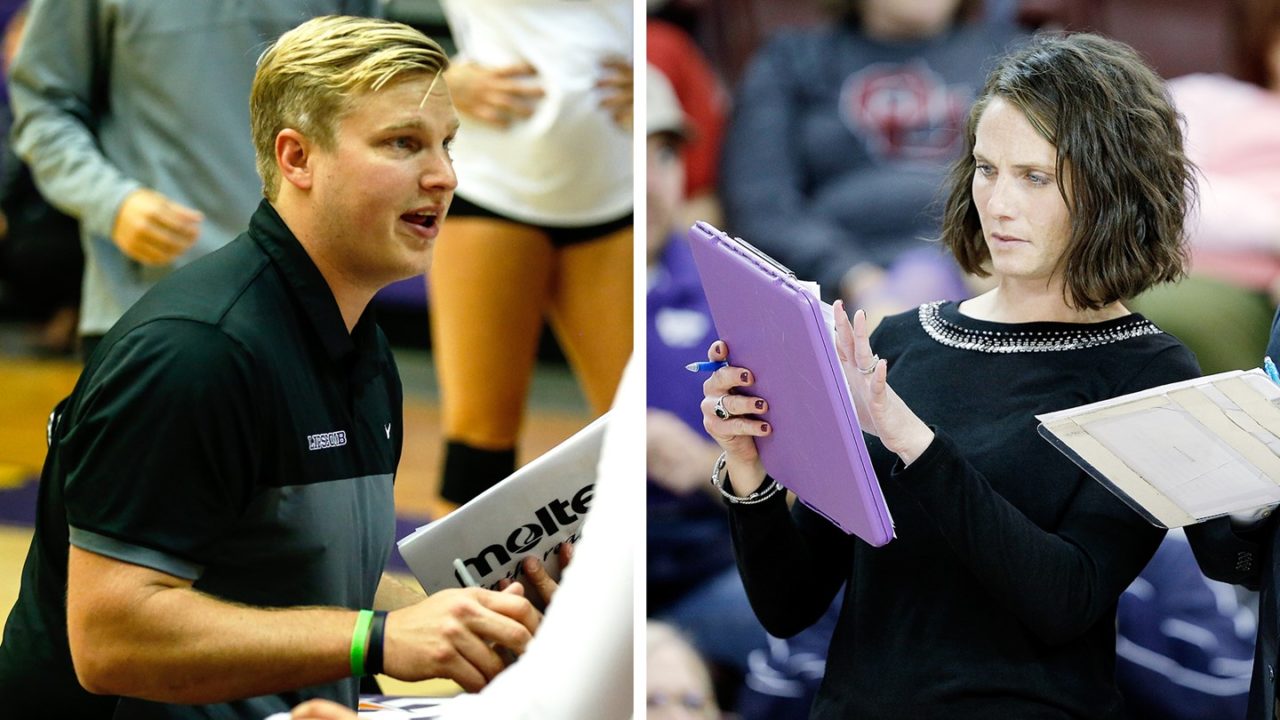 With two assistants leaving for other jobs, Kansas has made the addition of Billy Ebel (left) and Kelly Files (right) to the staff. Archive Photo via KU Athletics

Kansas is experiencing some shuffling to its coaching staff following the 2017 season and entering 2018 as they are bringing on two new assistants in Kelly Files and Billy Ebel. Files comes from Oklahoma, where she was an assistant coach, while Ebel was the associate head coach at Lipscomb.

The moves come on the heels of Laura “Bird” Kuhn being hired as the Texas A&M head coach. Kuhn leaves big shoes to be filled after she was the 2015 AVCA Assistant Coach of the Year.

Both Files and Ebel will know the area, as each attended high school in the Kansas City area. That should help in recruiting, where Kuhn was a key piece – although Kuhn hit the state of Texas hard for some of the Jayhawks’ biggest stars.

Files should have a nice jump on Texas though after she spent the last 13 seasons at Oklahoma, who usually recruits Texas as well. In fact, the Sooners had nine players on their 2017 roster from the Lone Star state. The former Southern Miss player was the AVCA National Assistant Coach of the Year in 2009.

“I always thought Kelly had such a great presence on the court,” Bechard said in the Jayhawks’ release of the news. “I know she will represent an ideal role model for our student-athletes. She’ll demand the very best of our players on and off the court because she has lived that herself as a former Division I student-athlete. Kelly will be an outstanding communicator and recruiter. We hope our players strive to be a lot like she is as they grow through their career here and into adulthood.”

Joining Files will be Ebel, a former Ball State team captain and player. He spent the last five years at Lipscomb – one of the better mid-majors playing in the Atlantic Sun – where he was promoted to associate head coach in 2016. He also had experience coaching some former and current Jayhawks after he had experience with the U.S. Women’s Junior National Teams with Kelsie Payne, Ainise Havili and Gabby Simpson.

“Billy’s infectious enthusiasm will serve our program very well,” Bechard added in the release. “He is a great ambassador for volleyball. His hunger to learn and gain experience has made him an outstanding teacher in the gym. In addition to his time at Lipscomb and UMKC, he has played at the highest level of the men’s game, has been involved with USA Volleyball programs, and worked numerous summer camps — including ours at KU. He puts the athletes first — he’s most concerned about their development.

The moves also mean that KU’s other assistant coach from their recent run, Todd Chamberlain, is done with his time at Kansas. According to the release, Chamberlain will be accepting a ‘soon-to-be-announced coaching opportunity.’ Interestingly enough, it would appear Ebel slides into his position as both played for Ball State.