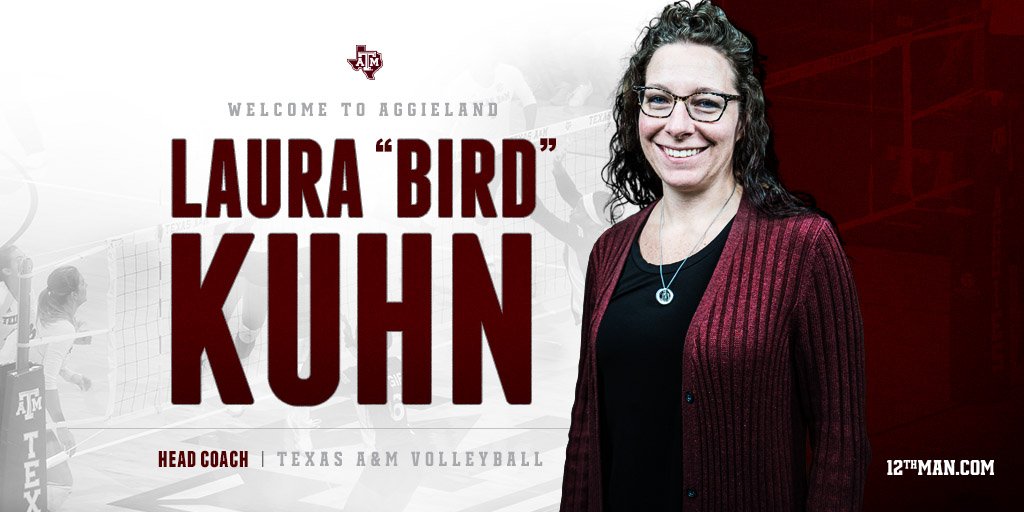 It’s official: Texas A&M has hired Laura “Bird” Kuhn as their new head coach. Kuhn joins the program from Kansas, where she was associate head coach and recruiting coordinator. Kuhn was named the AVCA National Assistant Coach of the Year in 2015 after the team finished with a school-record .299 hitting percentage.

She replaces Laurie Corbelli, who resigned after 25 years as the head coach of the Aggies.

Bird has been rumored as the front-runner for this job for the last couple weeks, and the news was made official on Saturday. During Bird’s 7 seasons at Kansas, she helped the team to their first NCAA Final Four appearance in 2015 and to their first Big 12 Conference title in 2016.

In the 5 seasons prior to Kuhn’s arrival, Kansas had 4 losing seasons (Ray Bechard has been the head coach there for 20 years). In the 7 years where Kuhn was there, the Jayhawks had 7 winning records, with an overall 167-52 record during that period (.763 winning percentage).

The Jayhawks and Aggies both failed to meet expectations in 2017.  The Aggies were chosen to finish 4th in the conference, but wound up just 9th. The Jayhawks were ranked #7 in VolleyMob’s pre-season top 25, but wound up suffering more from the loss of Cassie Wait’s leadership than expected, and lost to border rivals Missouri in the opening round of the NCAA tournament.

While Kansas and Texas A&M are no longer in the same conference, when Kansas first hired Kuhn, both were members of the Big 12.

Kuhn played collegiately at Georgia Tech from 2001-2004, where she started at opposite for 3 seasons. During her time with the program, they went a combined 113-25 (.819 winning percentage) and won 3 ACC regular season titles, plus 1 ACC tournament title. In her last 3 years with Georgia Tech, they reached at least the Sweet 16 on 3 occasions, and in 2003 became the first ACC team to reach a regional final.

She started her college coaching career in 2007 at Appalaichan State (19-14 record). She then spent 3 years as an assistant at Miami (FL), where the teams had a 67-28 combined record. In fact, in 21 seasons involved in college volleyball as a player and coach, Kuhn has never been involved in a losing season.

Kuhn takes over a team that is coming off a losing season, however, finishing 10-15 in 2017. They showed some sparks, including pushing eventual Final 4 team Penn State to a 5th set in September and sweeping Georgia, but ultimately finished with their 1st losing record since 2010.

“Not only is Bird an exceptional recruiter, but she has an uncanny proven ability to connect with, and develop, student-athletes,” said Scott Woodward, Texas A&M Director of Athletics. “She brings an energy, intensity, and no-nonsense approach that we are confident will resonate with our current student-athletes and recruits. We are thrilled for her to become our next head volleyball coach and we welcome her to the Aggie family.”

A press conference to formally introduce Kuhn will be held Wednesday, January 10th at noon.