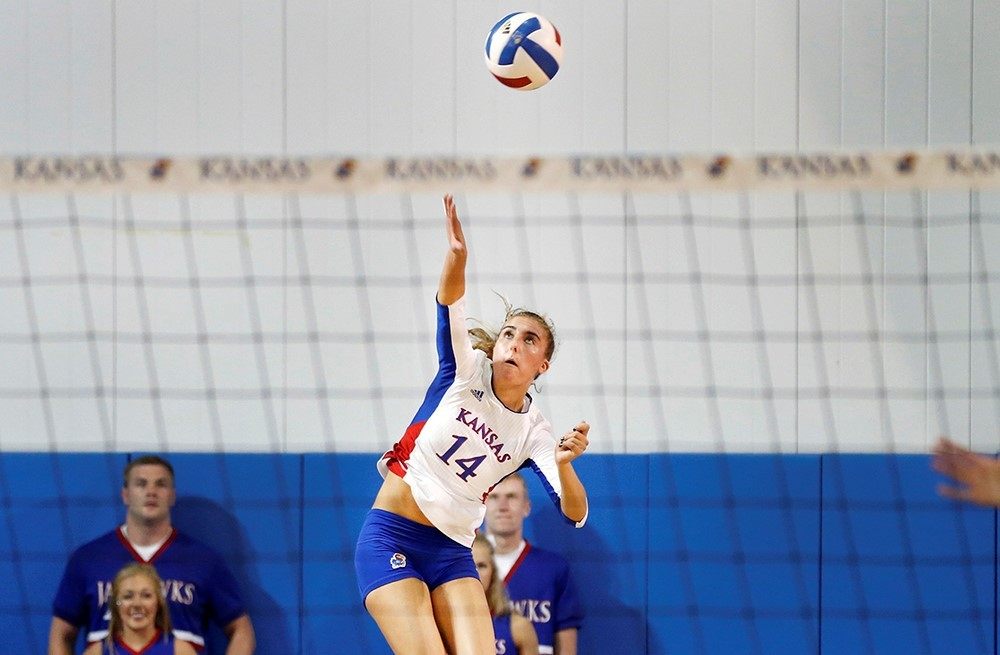 Kansas volleyball senior All-American Madison Rigdon was recognized on Sunday for her well-rounded excellence on the court, in the classroom and in the community as the 2017-18 recipient of the Marlene Mawson Exemplary Student-Athlete Award. Current Photo via Kansas Athletics

Kansas volleyball senior All-American Madison Rigdon was recognized on Sunday for her well-rounded excellence on the court, in the classroom and in the community as the 2017-18 recipient of the Marlene Mawson Exemplary Student-Athlete Award.

The award is presented by Kansas Athletics to one senior female student-athlete each year who played an integral role on her respective team and demonstrated strong character and leadership qualities, while also being a strong competitor in the classroom and in the field of play. Rigdon received the award from Dr. Marlene Mawson inside Allen Fieldhouse during a break in the action of the KU women’s basketball Dillons Sunflower Showdown game on Sunday.

“I feel incredibly honored to be recognized at this level of distinction at a place like KU Athletics where there are so many elite student-athletes,” Rigdon said. “Any of my success is all thanks to my coaches, teammates, and trailblazers like Marlene. Marlene is the one who started providing so many women at KU with opportunities in athletics 50 years ago — we wouldn’t be where we are today without her. My coaches continually put me in the best possible situation to be successful on and off the court. My teammates have made my four years here filled with lifelong memories.”

Nicknamed the “Mother of Kansas Athletics,” Dr. Mawson was appointed to a full-time physical education faculty position with the added responsibility of initiating an intercollegiate women’s sports program in 1968. In addition to directing the program, Dr. Mawson coached women’s basketball, volleyball, softball and field hockey during her first three years at KU. For 22 years, Dr. Mawson was a professor and administrator at the University of Kansas.

Rigdon is a three-time Academic All-Big 12 honoree and a regular on the Big 12 Commissioner’s Honor Roll during her All-American career as a student-athlete. She was part of an unprecedented era of success for Kansas volleyball that included an appearance in the 2015 NCAA Final Four and the program’s first-ever Big 12 Conference title in 2016.

“I approached my time at KU by trying to work hard every day, be coachable and be the best teammate I could possibly be,” Rigdon continued. “I hope I leave a legacy and a good example for future players to stand on my shoulders, just as I stood on the shoulders of those who came before me.”

One of the most memorable moments in Kansas Athletics history was Rigdon’s match-point kill to defeat No. 1 USC to win the NCAA Championship San Diego Regional Final and send Kansas to its first-ever Final Four appearance in 2015.

Rigdon’s numerous extracurricular activities included volunteering at the Boys and Girls Club of Lawrence and coaching a club team for the Landsharks Volleyball Club.

During the 2018-19 academic year, Rigdon will play one year of collegiate sand volleyball while pursuing a post-graduate degree at the University of Arizona.

Honored to receive the Marlene Mawson Female Student Athlete Award. Thank you so much for everything you have done for Women’s Athletics! Rock Chalk pic.twitter.com/uR1Col5new