Pitt Takes Down Virginia In Four On Senior Night 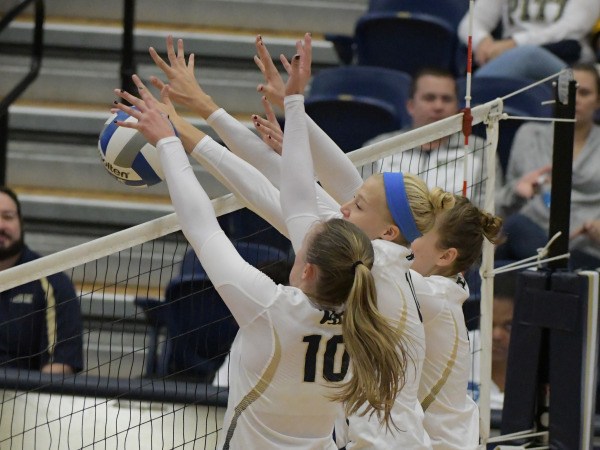 PITTSBURGH – The University of Pittsburgh volleyball team earned its third straight win after sweeping Virginia Tech, Friday evening at the Fitzgerald Field House, marking its second victory over the Hokies this season.
Following a pregame celebration of the Panthers’ two seniors, Maria Genitsaridi and Jenna Potts, Pitt [23-8, 14-5 ACC] defeated the Hokies [12-18, 7-12 ACC] in three sets 25-23, 25-18 and 25-19.
As a team, the Panthers posted better numbers than Virginia Tech in kills (47/38), assists (43/35), aces (7/1), digs (40/38) and total team blocks (8/6). Pitt also hit .308 on the night, while holding the Hokies to a .227 clip.
Offensively, the Panthers were led by redshirt freshman Stephanie Williams, who recorded her 23rd match with double-digit kills with 15 tonight. The Eastlake, Ohio, native concluded the match with a .444 hitting percentage and just three errors.
Potts was Pitt’s most consistent hitter of the evening, registering a .462 average after putting away seven of her 13 attempts. She committed just a single error. Potts also led the home team with four blocks.
Sophomore setter Kamalani Akeo set up the Panthers’ offensive success, tallying 35 assists on the evening. She also led Pitt in digs, in addition to freshman Nika Markovic, who both earned 11 digs on the evening. Akeo was the lone Panther to record a double-double.
Pitt served up seven aces against the Hokies, three of which were tallied by Markovic.
Set One: Pitt 25, Virginia Tech 23
In the opening set, a late offensive push by the Panthers led the home team to a 25-23 win over the Hokies.
Pitt and Virginia Tech battled for a lead in the opening points but it was the Hokies got out in front first 5-2. However, the Panthers answered and moved ahead 7-5 thanks to five straight points.
A four-point run by Virginia Tech put the Hokies back in control 10-8 and the opposing team remained ahead, 20-17, in the set.
A late offensive power surge by Pitt, including three straight kills, tied the set at 20 all. The Panthers attack continued to work and gave the home team a 23-22 lead.
Genitsaridi aced for the next point, setting up Pitt with set point. The Panthers sealed the win with a final kill by Markovic.
Set Two: Pitt 25, Virginia Tech 18
Pitt went up 2-0 in the match following a 25-18 victory against Virginia Tech in the second set.
The Panthers opened with a dominating performance, using a five-point run to take a 10-3 lead. During that run, Pitt put together two kills, two block assists and an ace.
The Panthers remained out in front, holding at slight lead over the Hokies through the midpoint of the set, though Pitt called a late timeout as Virginia Tech scored two straight to pull within three, 20-17.
The Panthers returned to the court and outscored the Hokies 5-1 to end the set.
Set Three: Pitt 25, Virginia Tech 19
Pitt earned its 14th sweep of the season after defeating Virginia Tech 25-19 in set three.
The Panthers jumped out in front right away, 12-8, forcing the Hokies to take their first timeout. Just points later, Virginia Tech called a second one, trying to slow Pitt who led by five, 16-11.
The Hokies were able to cut the Panthers’ lead to three, though that was the closest they would come to catching Pitt in the final set.

In its final match of the regular season, Pitt will take on Virginia in Charlottesville, Va., Saturday, Nov. 26 at 5 p.m.

“I thought we could hang with them offensively, and we did,” head coach Dennis Hohenshelt said. “Our passing broke down for too long at times, which is a replay of what happened up there earlier this season. They were able to get in a serving rhythm and we couldn’t get out of it. We worked really hard on the offensive end and had some really nice stretches of volleyball, they just weren’t long enough.”

Freshman Jennifer Wineholt (San Diego, Calif.) dished out 38 assists and had a team-high 10 digs to record a double-double. Burton and redshirt freshman Kat Young (Chantilly, Va.) each had three blocks.

The teams traded points to begin the first set, until a kill then a block by Kole gave Virginia a 9-7 lead as Pitt called timeout. The Panthers then began a 10-2 run to go ahead 17-11. The Cavaliers scored two-straight with a kill and ace for Burton, but Pitt continued to control the set, taking a 25-17 win.

UVA opened up an 8-3 lead in the second set. Pitt cut the lead to 9-7, but a 3-0 run capped off by two-straight blocks put the Cavaliers up 12-7. Virginia continued to stretch its lead and closed the set on a 3-1 run to win 25-18 and tie the match at 1-1. Virginia hit .433 in the second set, with Kole and Banker each recording five kills.

The Cavaliers fell behind 6-2 early in the third. After a timeout, Virginia scored two-straight with a kill by Banker and an ace for Burton to cut it to two. UVA cut the lead to 19-15, but a 6-2 run to close the set gave Pitt a 25-17 win.

In the fourth set, the teams were back and forth until a 7-0 run gave Pitt an 11-5 lead. The Cavaliers and Panthers traded points again, but Pitt continued to pull away with a 5-0 run to close the set and secure the win 25-11.

“I really appreciate the senior’s efforts they have given over the last four years,” Hohenshelt said. “They have been here everyday, putting in the time that it takes to be a good program and with their efforts they have shown on the court, in the classroom and locker room I am confident of where this program is going. I told them it’s not how I imagined their senior year to be, but in life there are a lot of ups and downs and if this is one of their downs then they will live a pretty good life. I hope they have learned as much from me as I have from them and I am very proud to have coached them.”