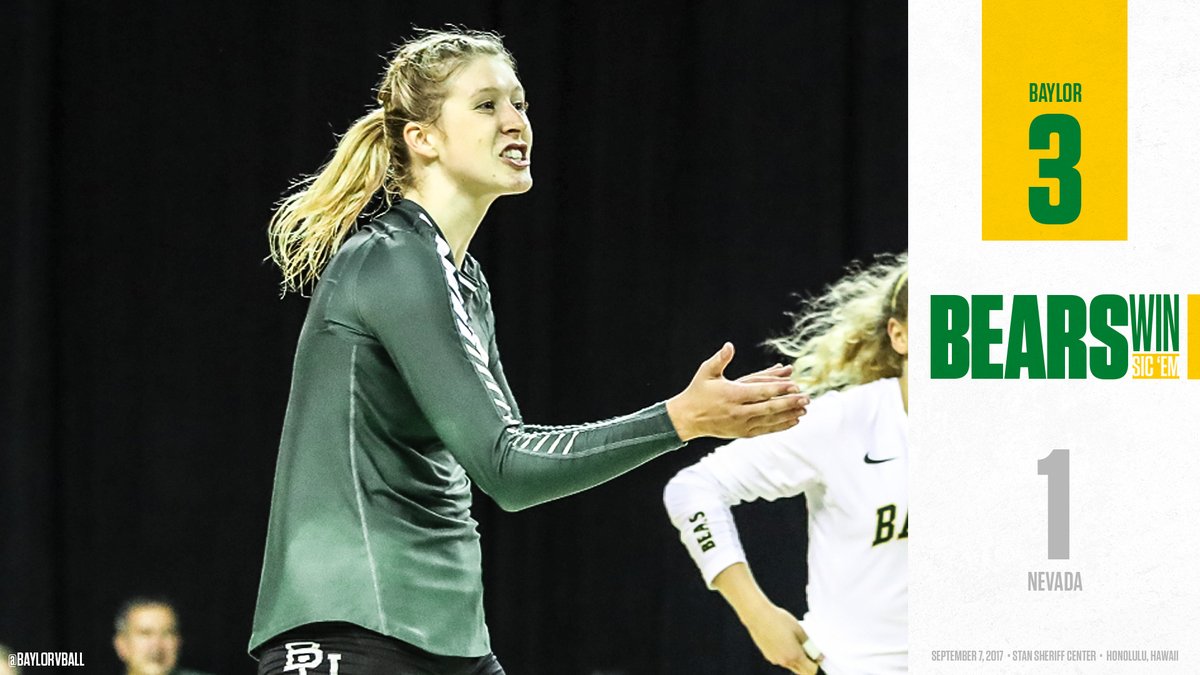 Baylor All-American Katie Staiger led both teams with 19 kills en route to a double-double and a 3-1 win over Nevada. Archive Photo via Baylor Athletics/Volleyball

Honolulu, Hawaii – Katie Staiger showed exactly why she was an All-American as she posted 19 kills and 16 digs in a four-set victory for Baylor over Nevada.

The Bears dominated the first two sets, but a late rally by Nevada forced a fourth and even extra points in that final set before Baylor came out on top.

Although the end of the match was as close as it gets, some of the team stats end up far apart because of Baylor outscoring Nevada 50-23 in the first two sets. For instance, Baylor hit .265 to Nevada’s .033 and had 79 digs to Nevada’s 58.

Most of Nevada’s offense came from Shayla Hoeft, who had 13 kills on a .387 hitting percentage. No other player on the team hit above .026, although a strong block kept them in the match.

It was a different story for Baylor, who besides Staiger had Yossiana Pressley (13 kills), Shelly Fanning (12 kills), Camryn Freiberg (seven kills on a .462 hitting percentage) and Aniah Philo (seven kills on a .368 hitting percentage) all post impressive offensive performances. The leader for it all was setter Hannah Lockin, who beyond recording four kills logged 52 assists (and 11 digs for a double-double).

Baylor also tacked on 13 team blocks to Nevada’s 10 as Freiberg had seven and Lockin netted six blocks. On the back end Jana Brusek notched 22 digs with Philo not far behind at 19 digs.

The schedule ramps up in the last two matches of this trip for Baylor, which is why it was so important they got this victory over Nevada. They take on the host team in Hawaii for a receiving vote squad matchup before taking on #13 BYU to round out their stay in Honolulu.

At 2-5, Nevada now continues the Outrigger Resorts Volleyball Challenge with two tough tasks ahead in #13 BYU and host-Hawaii as they look to salvage the weekend.

The Bears were led by senior Katie Staiger who recorded her fourth double-double of the season with 19 kills and 16 digs. Freshman Hannah Lockin recorded another double-double with 52 assists and 11 digs while senior Jana Brusek led all players with 22 digs.

BU led at the net with a 13.0-10.0 blocking advantage, coming up with a crucial block to give the Bears a match point in the fourth frame.

Baylor cruised in the first two sets, siding out at 90 percent in the opening frame. The Bears opened with an 8-1 lead in the opening set and never looked back en route to a 25-10 win.

The momentum stayed with the Bears in set two, hitting a match-high .444 attack effort to take the commanding 2-0 advantage.

Baylor let service errors smother the opportunity to get back into the third set, ultimately falling 25-23 after a late rally.

The Bears faced a 24-21 deficit and fought off five set points before winning on their second match point to take the fourth set and the match.

HIGHLIGHTS
• Katie Staiger (19 kills, 16 digs) and Hannah Lockin (52 assists, 11 digs) recorded double-doubles against the Wolf Pack.
• The Bears held its third opponent of the season below a .100 hitting efficiency (.033).
• Jana Brusek led all players with 22 digs.
• Camryn Freiberg led all players with seven blocks.
• With the win, Baylor moves to 2-2 in the all-time series against Nevada.

STAT OF THE MATCH
5 — the amount of set points Baylor erased before securing the fourth set and match.

WHAT’S NEXT
The Bears continue tournament action against host Hawai’i at 12 a.m. CT Friday night at the Stan Sheriff Center. The match will be live streamed on BigWest.TV.

HONOLULU  – Action got underway for the Nevada Wolf Pack volleyball team Thursday night at the Outrigger Resorts Volleyball Challenge. The Pack fell to 2-5 on the season after losing to the Baylor Bears (5-3) in four sets.

The sets went 25-10, 25-13, 23-25 and 29-27, showing a surge from the Wolf Pack in the final two frames. Sophomore Shayla Hoeft had a strong outing, putting down 13 kills and hitting at a tick of .387. A total of four Pack players racked up at least 10 digs in sophomores Camille Davey (14) and Ayla Fresenius (12) along with freshmen Kayla Afoaand Dalyn Burns (10). It marked the first time this season the Pack has seen such a balanced effort on defense. Hoeft also tallied five of Nevada’s 10 total blocks on the night.

The Bears ran away with the first two sets as the Pack just couldn’t get things going, taking set one 25-10 and set two 25-13.

Nevada finally came alive in the third set. Not letting Baylor get the early lead again, the Pack knotted things up at 4-4. Although Baylor would take the lead again, it wasn’t by much as a renewed effort from Hayward and mistakes on the Bear side kept things close. Then, off three straight kills from Hayward, the Pack went up 17-15. Baylor would tie it up again at 19-19, but Nevada wouldn’t give up the lead, taking set three 25-23.

The Pack jumped out to a quick 7-4 lead to begin set four, but Baylor quickly caught back up and the two teams wrangled back and forth. A total of eight ties and three lead changes would happen before Nevada went up 23-21. The Bears then went on a 3-1 run to tie things up at 24, but Hoeft immediately responded with a kill to put the Pack up one with the set point. The Bears tied it up again at 25. The two teams would even up at 25, 26 and 27 before the Bears scored two straight points to take the set 29-27, giving them the 3-1 victory.

Nevada will continue play at the Outrigger Resorts Volleyball Challenge Friday night, facing off with BYU at 7:45 p.m. PT.