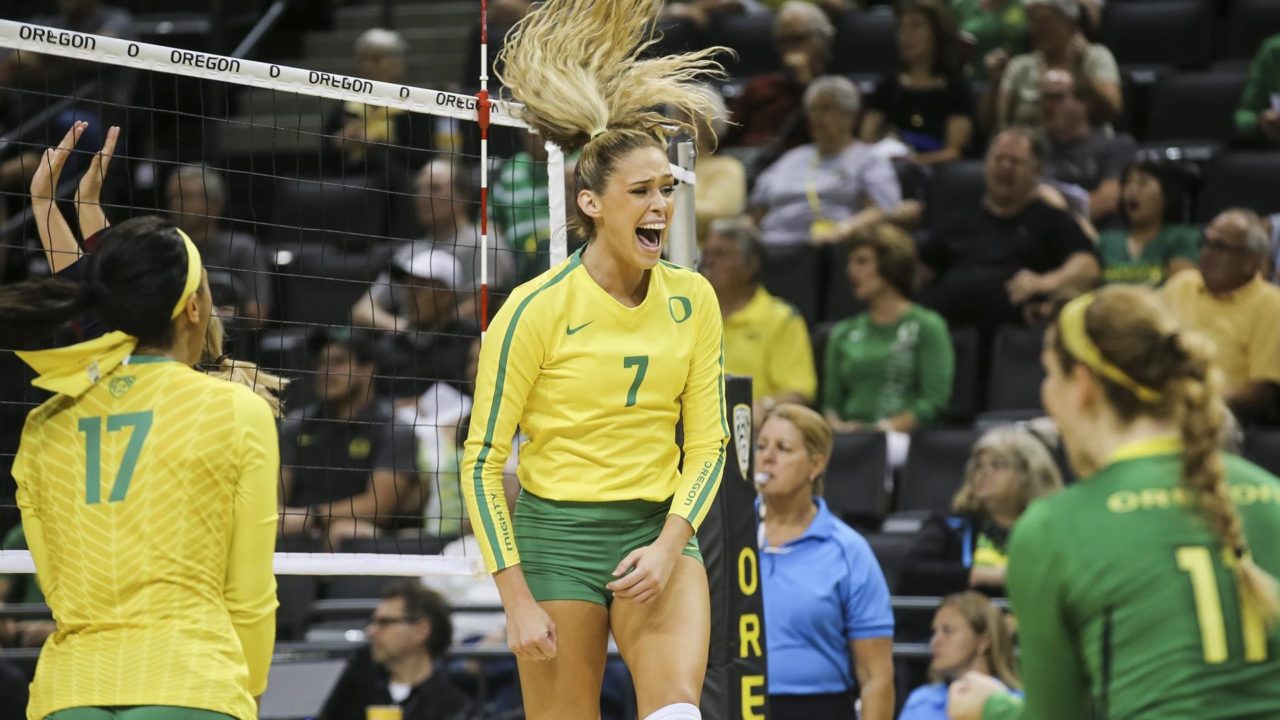 Senior right side hitter Taylor Agost put down 11 kills in an errorless effort, hitting .733 in 15 swings, and adding four blocks in the victory. Current Photo via Oregon Athletics

EUGENE, Ore. – Oregon put up 13 blocks and had help from six aces in a sweep of Cal Poly Thursday night.

Sophomore outside Torrey Van Winden and junior outside Adlee Van Winden turned in double-digit kill efforts to pace the Cal Poly effort, with 12 and 11 respectively. The sisters each managed an ace, while Adlee pulled up six digs and Torrey chipped in five digs. Sophomore middle Nikki Jackson put up a team-best four blocks, while junior libero Katherine Brouker managed a team-leading nine digs.

Cal Poly scored the first four points of the night as Adlee Van Vinden added a kill and an ace. The Mustangs boasted a six-point edge at 11-5 after kills by Raeann Greisen, Van Winden and Jackson. Oregon turned the tables with a 10-1 run, including two Agost kills and four blocks. The rally put the Ducks on top 15-12, giving the team a lead it would not relinquish. Down 23-19, Cal Poly scored three straight to cut the margin to one, but kills by Agost and Stone capped the Oregon win.

The teams were level at 5-all early in Set 2, before Cal poly surged ahead with a 4-0 run, incluidng a Torrey Van Winden ace. Down 9-5, Oregon turned it on with 12 of the next 15 points, including three Agost kills and capped by back-to-back stuffs by Johnson and Stone which made it 17-12. Another 4-0 run pushed the lead to six at 24-18. Cal Poly thwarted two set point chances, before Agost ended it at 25-20.

Both teams hit their stride in the final set, with the Ducks hitting at a .560 clip and Cal Poly checking in at .407. The Mustangs led 3-1, but Oregon pulled away with an 8-0 run. Two kills and an ace by Johnson and back-to-back aces by Stone aided the rally, which put the Ducks ahead 9-3. A Lindsey Vander Weide kill and one by Johnson pushed the margin to eight at 17-9. Cal Poly chipped away with a 5-0 run, including three Oregon miscues. The Ducks led 22-16 soon after and got a kill and a block by Stone to set up a match-point try at 24-19. A Torrey Van Winden kill kept the set going momentarily, but Johnson put down her 10th kill of the night to end the match for Oregon.

The Ducks (5-1) kick off the four-team, three-day tournament with their third straight-set win of the season, and have now won four straight matches after sweeping the Oregon Classic at MKA last weekend. How it Happened: Cal Poly (5-2) started fast out of the gate with an early 8-3 lead, but a timeout by Oregon head coach Matt Ulmer jump-started a 6-0 run that pulled the match even, 11-11. The Ducks would extend their scoring run to 14-4 to take a four-point lead, 19-15, and moved within two points of taking the set at 23-19 before the Mustangs scored three straight to pull within a point, 23-22. Oregon would finish off the set out of a timeout with kills by Taylor Agost and Ronika Stone to move ahead in the match, 1-0.

With Cal Poly leading, 9-5, in the second set, the Ducks again came out hot out of a timeout to score 12 points in 15 rallies to move ahead, 17-12, and force the Mustangs into using both of their timeouts. Cal Poly rallied to get within two, 20-18, before Oregon scored four straight and five of seven to take the game and a two-set lead. Agost enjoyed a huge set with five kills on five swings, including Oregon’s final two points of the set.

Oregon erased an early 3-1 Cal Poly lead in the third with eight straight points, and the Ducks kept their foot on the gas en route to a 17-9 advantage. Cal Poly put together a couple of scoring runs to cut the lead to 22-19, but the Ducks scored three of the final four points to finish off the sweep.

Who Stood Out: Agost was terrific with 11 kills on 15 swings without an error, setting a new career-high for hitting percentage at .733. Willow Johnson put down 10 kills on .389 hitting with a career-high six blocks, Jolie Rasmussen had eight kills and 10 digs in her first extended action of the season and Ronika Stone had a career-high nine blocks along with two aces. Senior libero Alex Hojnar also added a pair of aces to go with seven digs. Block Party: The Ducks dominated on the block against the Mustangs, finishing with 13 blocks Cal Poly’s four. Stone kicked off her huge night at the net with six first-set blocks, leading the Ducks to an impressive eight as a team in the opening set. Agost and Sumeet Gill each added four blocks of their own throughout the match.

Quotable: Head Coach Matt Ulmer
On tonight’s match…
“We’re so ready to go that we’re over-ready. We have to do a better job of starting out in our game plan right away by executing and calming down. I love that when we’re down, we come back. We’re coming back every time, which is a nice habit to have. I’d rather finish strong than start strong.”

On tonight’s strong defense…
“I think we knew Cal Poly’s tendencies pretty well, but I thought we just executed so much better. Coach Ron (Beick) did a great job coaching with our blocks, and you could see it was a change from last week to this week.”

Notable: Oregon got gradually more efficient throughout the night, hitting .088 in the first set, .290 in the second and .560 in the final set … Oregon had six aces to Cal Poly’s three, with Stone and Hojnar combining for four … Stone continues to be impressive in the service game; she now leads the Ducks with nine on the season … The Ducks are now 4-1 this season when winning the first set.

Up Next: The Ducks will wrap up the second day of the Nike Classic on Friday night with a top-25 matchup against No. 23 Wichita State at 8 p.m. PT. The Shockers will open the day against Duquesne at 11 a.m., and Cal Poly will face Duquesne at 6 p.m. prior to the Ducks’ match with Wichita State.

The Mustangs (5-2) got off to a strong start to open the first set, scoring the first four points. After getting an 11-5 lead early on, the Ducks (5-1) went on a 6-0 run to tie it at 11 apiece. It was a back-and-forth set after that. Late in the set, Cal Poly scored three straight points to get it back to 22-23; but Oregon got the next two points to win the set.

In the first set, the Mustangs had 13 attack errors. Oregon, meanwhile, had eight blocks in the opening set.

The Mustangs got out to an early 3-1 lead in the third, but the Ducks would score five straight points go up 6-3. Later in the set, after a Cal Poly timeout down 9-17, the Mustangs would score five straight points to get it to within three thanks to three attack errors by Oregon. Cal Poly would get as close as 19-22 but Oregon would go on to win 25-20.

“I thought the first two sets and even the third set, we had a good mentality,” head coach Sam Crosson said. “(We) can execute and score points against good teams. Coming out of the gate to start the sets off strong was a good sign for us moving forward.”

The Ducks as a team hit .289 and had 13 blocks. They were led by Taylor Agost, who had 11 kills and four blocks. Teammate Willow Johnson had 10 kills and a team-high six blocks.

The Mustangs return to the court Friday to continue Nike Classic play. They will take on Duquesne at 6 p.m.