Kazala, Forsythe Tabbed as Patriot League Players of the Week 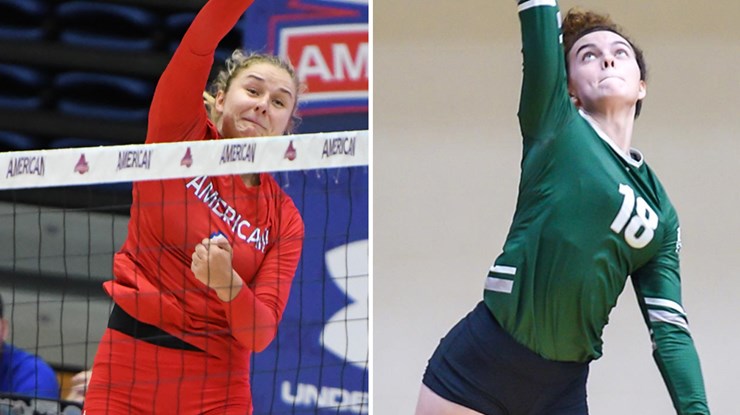 CENTER VALLEY, Pa. — American and Loyola Maryland split this week’s volleyball awards that were announced by the League office on Monday. The Eagles’ Aleksandra Kazala was named Patriot League Volleyball Player of the Week for the second time this season, while the Greyhounds’ Katie Forsythe was selected as rookie of the week for the sixth time this season.

Aleksandra Kazala, American, Sr., OH, Debica, Poland
* Kazala led the Eagles to triumphs versus Loyola Maryland and Navy.
* The senior notched a team-best 18 kills in a 3-0 sweep over Navy.
* She then nabbed a double-double at Loyola Maryland with 16 kills and 18 digs. She also added three blocks versus the Greyhounds.

Katie Forsythe, Loyola Maryland, Fr., L, Perry, Ohio
* Forsythe averaged 5.25 digs per set in two matches against American and Navy.
* In the match against American, she had 23 digs as the Greyhounds pushed American to five sets for the first time since joining the Patriot League. She added an ace and six assists while receiving 42 serves without making a reception error.
* The rookie then had 19 digs versus Navy.

Alex Stein, Colgate, Jr., OH, East Setauket, N.Y.
* Stein earned her seventh double-double on the season with a team-high 13 kills and 14 digs in the 3-0 sweep over Bucknell this past weekend.