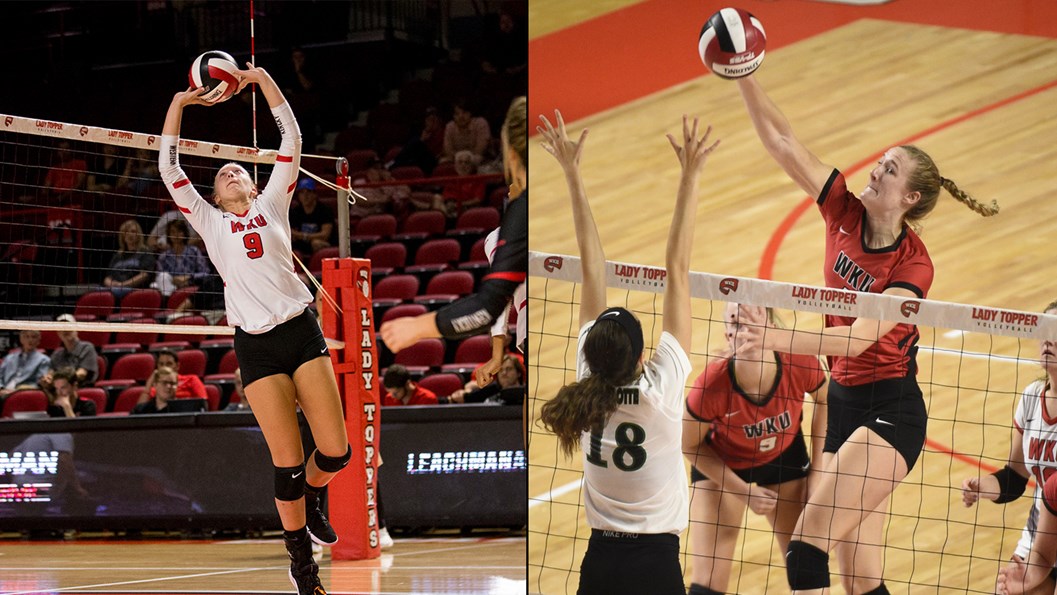 WKU’s Rachel Anderson and Taylor Bebout were honored with their second Conference USA Offensive Player of the Week and Setter of the Week awards of the season, respectively. Rice's Lee Ann Cunningham and Charlotte's Tyra Galloway were also honored.  Current Photo via Western Kentucky Athletics

Rachel Anderson, WKU, Sr., Sturgis, Mich.
Anderson worked at a blistering pace for WKU in its two-match road swing over the weekend. The Lady Toppers picked up C-USA wins at UTEP and UTSA before heading home to Bowling Green. The senior racked up 36 kills (5.14/set) at a scorching .533 clip, committing just four errors in 60 attempts, with 6.36 points per set through seven sets. The Louisville product launched 17 kills at a .696 attack percentage with three blocks and 19 points in a sweep of the Miners. Against a tough test in UTSA on Sunday, Anderson powered 19 kills with two aces, five blocks and 25.5 points to lift WKU to a 3-1 win.

Lee Ann Cunningham, Rice, Jr., Louisville, Ky.
Rice established a program-record 13-consecutive wins this weekend with 3-0 and 3-2 decisions at UTSA and UTEP, respectively. Cunningham was the backbone of the Owl defense while averaging 6.00 digs per set. In El Paso, the junior notched 19 digs and four assists. Against then second-place UTSA on Sunday, she tied for the third-most digs by a C-USA player during league play (29). She also chimed in with nine assists and a flawless reception rate in the five-set thriller.

For the 2nd time in the last 3 weeks, @leeann5757 has been named the #CUSAVB Defensive Player of the Week!

Taylor Bebout, WKU, R-Fr., Decatur, Ind.
Bebout painted arguably the best weekend of her young career on a road trip to Texas. WKU went 2-0 as the setter posted 92 helpers through seven sets (13.14/set), facilitating her offense to a .426 hitting percentage in the sweep over UTEP. The Lady Toppers matched the season’s three-set kill mark with 57 on the night. The Indiana native registered 47 assists at a .553-percent efficiency with two aces and four digs in Friday’s matchup. Bebout compiled 45 more assists with four kills and three digs in Sunday’s effort on the Roadrunners’ home court.

Big congrats to Rachel Anderson and Taylor Bebout for each earning their second @ConferenceUSA weekly award of the season today! #GoTopshttps://t.co/JQJu0a9F2N

Tyra Galloway, Charlotte, Fr., Advance, N.C.
Galloway guided Charlotte to a pair of sweeps over FIU and Louisiana Tech this weekend with an all-around effort on both sides on the ball. The newcomer hit .375 in each match with 10 total kills, adding 13 blocks and 17 points in six sets. The freshman’s performance padded her season’s stat sheet, as she continues to top the C-USA rankings in total blocks (134), block assists (108) and blocks per set (1.35).

CONGRATS TYRA! Tyra Galloway has been named this week's Conference USA Freshman of the Week after a stellar weekend vs. FIU and Louisiana Tech!