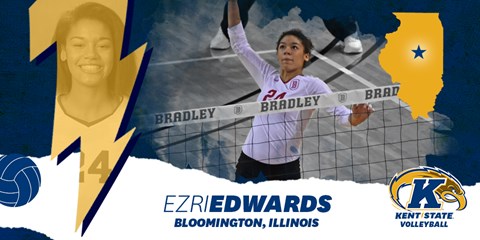 Kent State has landed a second transfer addition this offseason as middle blocker Ezri Edwards is headed into the program out of Bradley. Edwards, who joins former Kansas State setter Alex Haffner on the team via the transfer market, will be a sophomore come the fall semester with three years left of play and is set to be immediately eligible.

Being that she will be in just year two, Edwards only spent one season with Bradley in the Missouri Valley Conference (MVC). She appeared in 24 matches for the Braves with 11 starts, earning more playing time than any other freshman on a team that had a three-match improvement from the season prior.

In total for her inaugural season, she logged 77 kills (1.10 per set) on a .131 hitting percentage, 35 blocks (0.5 per set) and 16 digs. Her season high of kills (11) came twice in back-to-back matches against Loyola and Evansville, while six blocks were her most in a match which came against Murray State.

A 6’1″ native of Bloomington, Illinois, Edwards attended Bloomington High School prior to her quick stint at Bradley. With the school she won two conference championships as an upperclassman and went to a regional final as a senior when she logged 82 blocks.

“Ezri will be a solid all-around middle for us,” Kent State head coach Don Gromala said in the team’s release of the addition. “She is strong attacking off of one foot and brings a lot of energy to the court.”

Edwards now joins three other middle blockers on the current 2018 roster for Kent State. The first opportunity for her to get game action will technically be on August 14 in the Blue vs. Gold scrimmage and on August 17 against Findlay in an exhibition. The regular season opener though for Kent State will be played on August 24 against Grambling State with a night cap against Nicholls State.

The Golden Flashes are coming off of a 5-22 season in 2017 in which they finished 3-13 as a member of the Mid-American Conference (MAC).