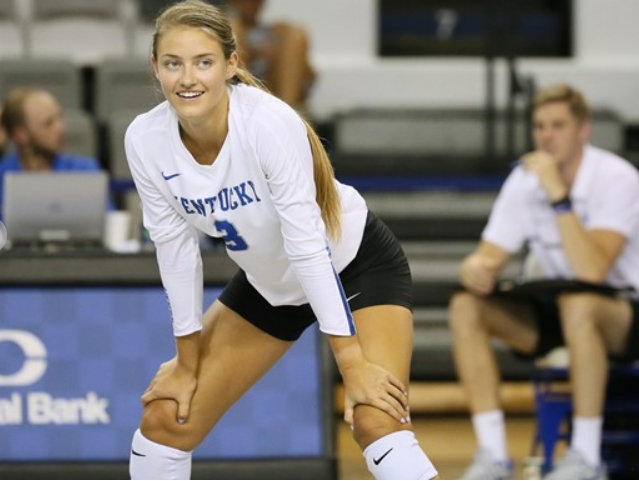 Kentucky takes home their sixth SEC title and first since 1988 in a sweep over Georgia to end the regular season. Current Photo via UK Athletics

Kentucky takes home their sixth SEC title and first since 1988 in a sweep over Georgia to end the regular season. With their impressive season, the Wildcats have a decent shot at a high seed in the NCAA Tournament.

The Wildcats hit for .336 in the win while holding Georgia to a low .161 hitting performance.

The first two sets of the match were tight battles between the two squads, as Georgia kept things close until Kentucky fought to end the set. The third set brought the Wildcats to an easy finish of the regular season, as they quickly ran through Georgia 25-14 to cap off the SEC title share.

Leah Edmond led the way with 15 kills on a .389 hitting clip along with 11 digs and two aces for a double-double for the Wildcats while Avery Skinner recorded 11 kills on a .308 hitting performance. Ashley Dusek picked up a match-best 20 digs.

For Georgia, Rachel Ritchie posted 11 kills while Meghan Donovan dished out 27 assists and 13 digs for a double-double.

For the sixth time in program history and the first since 1988, the Kentucky volleyball team will take home the Southeastern Conference title after earning a 3-0 sweep (25-21, 25-21, 25-14) at Georgia on Friday night.

It was a total team effort – just as it has been all season – for the Wildcats, who completed the best regular-season under 13th-year head coach Craig Skinner with a 26-3 overall record and a 17-1 mark against SEC foes. The win secures at least a share of the SEC championship with Florida playing its final regular-season match of the season tomorrow at Missouri.

“Seniors. Toughness. Will. Resiliency. January starting to work and prepare for it and I’m just really proud of these guys,” Skinner said in describing what it took to win the title. “How tough were we in set one? I mean, Georgia had it going, we responded and made a couple of big blocks, and then Leah (Edmond) had a great serving run. So, toughness like that is what got it done for us.”

Kentucky will await its fate for the NCAA Tournament with the selection show airing on ESPNU on Sunday at 9 p.m. ET.

Sophomore Leah Edmond paced the Wildcat attack with a match-high 15 kills on a .389 hitting percentage. She also chipped in with 11 digs to aid the winning cause. Freshman Avery Skinner added 11 kills on a .308 clip.

SEC Freshman of the Year Madison Lilley dished out 36 assists and helped UK amass 47 kills on a .336 attacking percentage in the win. Senior Kaz Brown added eight kills on a .438 attacking clip to go along with a pair of blocks. Classmate Emily Franklin had seven kills, while junior Brooke Morgan added four.

SEC Libero of the Year Ashley Dusek once again made her presence felt with a match-high 20 digs. Junior McKenzie Watson had four and freshman Gabby Curry added three.

Kentucky rebounded late in the opening frame to come back with a 25-21 win, while with an SEC Championship in sight the Cats put together a 14-4 run to make a close 10-9 score a 24-13 margin.

Set One
Georgia claimed a quick two points to open the match before UK’s defense forced back-to-back-to-back hitting errors to get on the board and a take a lead of its own. Brown continued the run with UK’s first kill of the match, followed by a deep hammer from Edmond and then Skinner followed suit to push the run to 6-0 and a 6-2 edge. After Georgia pulled back to within three at 8-5, Brown smashed one into the middle of the defense to snap the spurt. Georgia continued to fight back and eventually recaptured a lead at 12-11 behind a 5-0 run. Kentucky opted for a timeout. After the break, the Bulldogs scored three more points to push the run to 8-0 and get a 15-11 edge. Skinner finally stopped the run with a kill. An ace from Curry combined with a block from Brown and Skinner helped Kentucky pull to within 17-16. Franklin and Edmond then teamed up for a rejection to tie the score at 17 apiece. The teams swapped points until Georgia put together two straight for a 20-18 lead. Edmond immediately fired back with a kill and then the home team committed another attacking error to tie things once again. Skinner and Franklin teamed up for a rejection to give UK a 21-20 lead. Georgia decided to take a timeout. Out of the break, Franklin converted an overpass to push UK’s lead to two. Edmond then had an ace and Kentucky’s lead grew to three. Georgia opted to use its final timeout and Edmond came out with another ace following the timeout. The set’s clinching point came on a Skinner kill for a 25-21 win.

Set Two
Lilley called her own name to open the scoring in the second set before Georgia immediately fired back with a kill of its own. The teams exchanged points until Kentucky was able to shake loose for two straight capped by a kill from Skinner for a 9-7 lead. Georgia wasted little time in firing back with a 2-0 spurt of its own knot the score. Lilley won the joust to lift Kentucky to a two-point lead at 12-10. Franklin converted off a slide out of a UGA timeout to increase UK’s lead to three. Morgan came up with a kill and the Bulldogs took their second timeout down 15-11. Skinner’s finish helped the Wildcats increase the lead to 18-13. It was all the more breathing room the Cats would need en route to a comfortable 25-21 second victory.

Set Three
Georgia began the scoring in the third stanza, but Brown fired back with a quick kill. Edmond then took advantage of an overpass to lift Kentucky to an early advantage. The Bulldogs answered and the teams swapped points until Edmond posted consecutive kills for a 6-4 lead. Franklin helped push the lead to three at 8-5 with a kill of her own. Georgia pulled back to within one at 10-9, but Brown was able to get a tip kill to once again give Kentucky a multi-point lead. Brown combined with Edmond for a huge Big Blue block to increase the lead to four at 13-9 and the home team chose to take its first timeout. Edmond laced a rocket to the backrow for a 16-10 Kentucky lead and Georgia chose to take its final timeout. Out of the break, Kentucky scored three more points to better the score to 19-10. Morgan and Franklin teamed up for a block to push UK’s run to 14-4 and a 24-11 lead. The Bulldogs were able to save match point three times before a Bulldog error clinched the title at 25-15 win.

On Friday evening, freshman outside hitter Rachel Ritchie and sophomore setter Meghan Donovan carried the offense with 11 kills and 13 digs, respectively. Ritchie’s double-digit kill outing is her 22nd in her early career. Donovan paired her defensive prowess with 27 assists, recording her fourth-straight double-double, and 12th on the season, which tops her season-total of 10 from the year before.

“I thought we fought hard,” Georgia head coach Tom Blacksaid. “Kentucky’s a great team. I don’t think we really got our serving going, though I saw a little bit in set three. Blocking got a little better, but they put a lot of pressure on you to make you earn your points.”

Trailing 11-7 early in the first set, Georgia returned with eight unanswered points with junior Sydney Gilliam behind the service line. To take the 15-11 lead, the 8-0 run highlighted a Gilliam service ace and a kill apiece from redshirt freshman Kianna Young and Donovan.

The two teams traded points back-and-forth for the remainder of the set, with Young and Ritchie posting four kills respectively. Kentucky (26-3, 17-1) held out for the 25-21 first-set edge, despite Georgia holding the conference-leader in hitting percentage (.319) to a .206 ratio.

The battle continued in the second set with nine tied scores. Donovan continued to guide the offense with 10 assists, dishing out four kills apiece to both junior Majesti Bass and Ritchie. Georgia brought the score within two at 20-18 with a kill and a service ace from freshman T’ara Ceasar, but Kentucky commanded the remaining points in sets two and three for the 25-21, 25-14 wins.

Prior to Friday evening’s match, a trio of Bulldog seniors were honored: Cassidy Anderson, Amanda Dachs, and Kendall Kazor.

“They’ve gone through so much,” Black said on the seniors, “It begins and ends with them, and they tone they’ve set, and how hard they’ve worked. They haven’t let the past dictate what they think they can do in the future, and I think that’s something I most respect about them. We’ll miss them a lot, but I’m so grateful for the tone they’ve set.”

In Black’s first season as head coach, Georgia’s regular-season record concludes at 20-11, and 10-8 in the conference, which marks the Bulldogs’ first 20-win season since 2013.