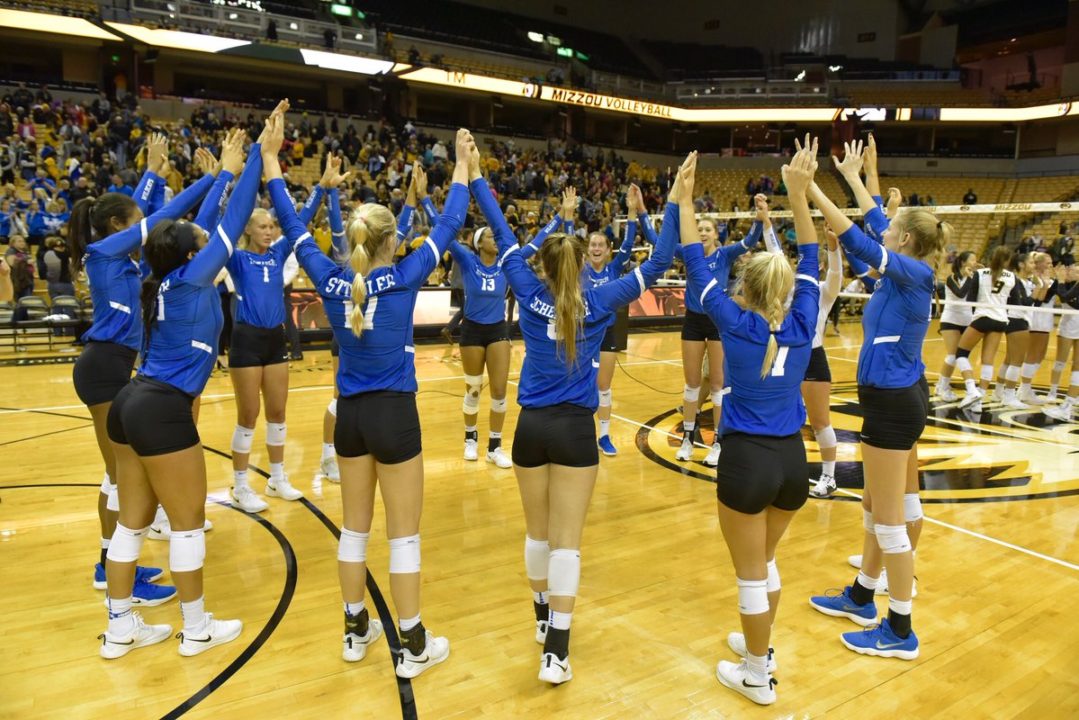 The Wildcats dropped the opening set, the first set lost by UK in 26 tries – but rallied to easily win the final three sets of the match and take a 3-1 win back to Lexington.

“Just proud to be part of such a special group,” UK head coach Craig Skinner said. “We’ve known from the beginning, we will need all of us and people like Avery Skinner, Merideth Jewell and McKenzie Watson came in and made a big impact on a challenging match. As a collective staff, we really respect how our team embraced the challenge tonight.”

It was a balanced offensive attack for UK, as the Wildcats hit .270 in the match with junior Leah Edmond leading the way with 21 kills. Avery Skinner had 10 kills in the match, the most in a single game for her since August 31 against Charleston, and her fourth match this season with double-digit kills. Skinner also tallied the most blocks of her career with four. For Edmond, it was her seventh-straight match posting double-digit kills, and her team-leading eighth with 20-plus kills. She has now posted 20-plus kills in three of the last four matches.

Sophomore setter Madison Lilley picked up her tenth double-double and second in a row after posting 38 assists and the second most digs of her career with 18. She also added six kills, matching her career best, and posted three blocks and an ace. Sophomore middle blocker Kendyl Paris posted seven kills, which is her most against an SEC opponent, hit .455 and added three blocks and a career-high three digs.

Brooke Morgan was the fourth Wildcat to hit above .300 with seven kills on 15 swings with just one error for a .400 hitting clip. The senior middle blocker added five blocks for the second consecutive match to lead the team. Sophomore libero Gabby Curry posted 12 digs along with a career-best seven assists, which she’s now reached in back-to-back matches, to go along with two aces. Merideth Jewell entered with two kills, three digs and a block while McKenzie Watson and Lauren Tharp picked up three and four digs, respectively.

UK held South Carolina to just .232 offensively and under .200 in the final three sets of play.

Kentucky will close the season on Saturday afternoon against Auburn inside Memorial Coliseum. The match will have a first serve of 1 p.m. ET and will be broadcast live on the SEC Network+, ESPN3 and the ESPN app. Saturday will also be Senior Day, with ceremonies beginning around 12:45 p.m. ET.

There ya go. Outright conference champs and 2️⃣0️⃣ wins in a row. 😼

Be sure to come out and see the Cats in the final home match and Senior Day on Saturday!https://t.co/NqIZztYi9j pic.twitter.com/63xcPoo8XU

SET 1
South Carolina won the first five points of the match in succession before a serving error ended the Gamecock run. The Wildcats crept back into the set thanks to kills by Leah Edmond and Brooke Morgan, but USC pulled away to a five-point lead again at 9-4 and Kentucky called its first timeout. Edmond’s fourth kill of the set put Kentucky to within two, but a 4-0 USC run forced UK into its second called stoppage leading at 14-9. The Wildcats came as close as five points down the stretch, but South Carolina closed out the opening set 25-19. It was the first set UK has lost in its last 26. Leah Edmond led UK with eight kills, as the Wildcat were held to just .175 hitting in the opening frame.

SET 2
Kentucky started much better in the second set, and got out to a 3-1 lead. After a choppy series of plays with numerous discussions and challenges, the set got its rhythm back and UK took a 15-10 lead into the media timeout. Avery Skinner made a large impact, as she had two kills that put UK in the driver’s seat at 19-13 coupled with Brooke Morgan firing away from the right side and South Carolina used a timeout. The run extended to 8-3 and five in a row on two service aces from Gabby Curry to force USC into its second timeout in three points at 21-13. A disjointed play with numerous funky bounces and touches ended with a Madison Lilley kill, and Kentucky took the second set, 25-21.

SET 3
Avery Skinner and Kendyl Paris teamed up at the net on back-to-back points to stuff a pair of USC attacks and it opened a big UK lead at 7-3 as the Wildcats went on the first tangible run of the set at 5-0. South Carolina responded with a 4-0 run of its own to tie the set at nine all. After USC rallied to tie the frame, Kentucky went on a 4-0 run capped by two Skinner kills from the left side, and that put the Wildcats up 15-11 at the media timeout. The five-point would appear again as Edmond hammered home her 15th kill of the match and put UK up 19-14, forcing the Gamecocks into a timeout. Edmond terminated three of the next four points and ran her match kill count up to 17 to force USC into another timeout at 22-16. Kentucky soundly closed out the set with kills from Edmond and then a Gamecock attacking error. UK hit .353 in the set, the highest number of any set for UK in the match to that point.

SET 4
After dropping the opening pair of points, Paris and Morgan sparked a 5-0 UK run to start the fourth set and open a multi-point lead in the early going at 5-2. Skinner tucked home her seventh kill of the night in the longest rally of the match crosscourt as Kentucky saw its lead extend to 11-7, and South Carolina called for its first timeout of the frame. A 7-1 run forced South Carolina into its second and final timeout of the match after four-consecutive errors saw UK take a 16-8 lead. Lilley slammed home her sixth kill of the match on match point and Kentucky won the set, 25-17.

The team was efficient in the opening game, winning 25-19 and holding Kentucky to just a .125 hitting percentage. Courtney Furlong and Mikayla Robinson each had five kills off just 14 combined attacks as the Gamecocks led wire-to-wire. A 5-0 run started the set, and after Kentucky made it just 11-9 in favor of Carolina, a 6-0 run behind the serve of Claire Edwards put the game out of reach.

Kentucky benefitted from adjustments coming out of the opening set, and hit .327 over the final three sets to come back for the win. The Gamecock offense would not waver much statistically from the first set, but unforced errors on their own side of the net helped Kentucky find its mojo. The Wildcats were able to lock down on Robinson after her big opening set, holding her to five kills and five errors on 23 swings for the final three frames, and South Carolina’s defense wasn’t able to slow down All-American left-side hitter Leah Edmond, who hit .327 with 21 kills for the night.

South Carolina finished the night with just three fewer kills than Kentucky, but weren’t able to force the Wildcats into easy errors. Over the final two sets, the visitors were able to side-out at 72 percent, meaning the Gamecocks were stifled from piecing together the runs that helped them take the opening game. Kentucky’s defense finished the match off in the fourth with 21 digs and a pair of blocks to hold South Carolina to just 10 kills and a .135 hitting percentage, en route to a 25-17 win.

UP NEXT: The team will travel on Thanksgiving Day to get ready for a Black Friday showdown with No. 13 Florida in Gainesville on Nov. 23 for a 7 p.m. first serve. It will be the regular season finale for both teams.