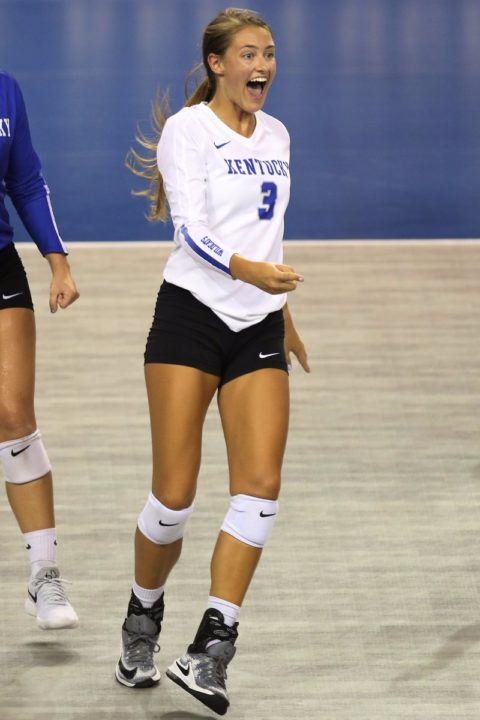 Freshman phenom Madison Lilley took home the SEC Player of the Week for her strong week of action playing with the Kentucky Wildcats. Lilley also took home the conference’s Setter of the Week award as a trio of others garnered weekly honors alongside her.

Kentucky started the week on Labor Day, however the SEC only counted its two matches on the weekend as the Wildcats went 2-0. Lilley was key in the team’s success, as the 5’11” freshman setter from Overland Park, Kansas averaged 14.4 assists per set. She started with a 36 assist performance in a sweep of Loyola-Chicago and ended with 65 assists in a four-set win over Marquette, a team on the cusp of the latest VolleyMob Top 25. In total, Kentucky hit .548 and .451 in the two matches respectively.

Joining Lilley on the SEC weekly awards for the third week of the season are Pilar Victoria of Arkansas, Quincey Gary of Alabama and Taylor Bannister of LSU.

Victoria earns the SEC Offensive Player of the Week award for the second straight week, as she posted 6.00 kills and 3.19 digs per set in three matches. She also helped the Razorbacks go 2-1 in those three, as they almost upended a top-20 USC team behind her 29 kills.

From offense to defense, Gary earned the SEC Defensive Player of the Week for this past week’s action. The junior libero from Alexandria, Indiana notched 5.70 digs per set as she was named to the Hampton Inn Bama Bash All-Tournament Team with Alabama going 3-0 against their competition.

Rounding out the quartet of awardees is Bannister, the SEC Freshman of the Week. The 6’5″ middle blocker/outside hitter logged a .543 hitting percentage on 58 kills. That included a 26 kill performance in a five-set win for LSU over High Point, as she posted nine of the 26 in one set alone.

The list view of the winners can be seen below: