Belgium and Argentina Win in Pool A, Belgium Qualifies For Round 2 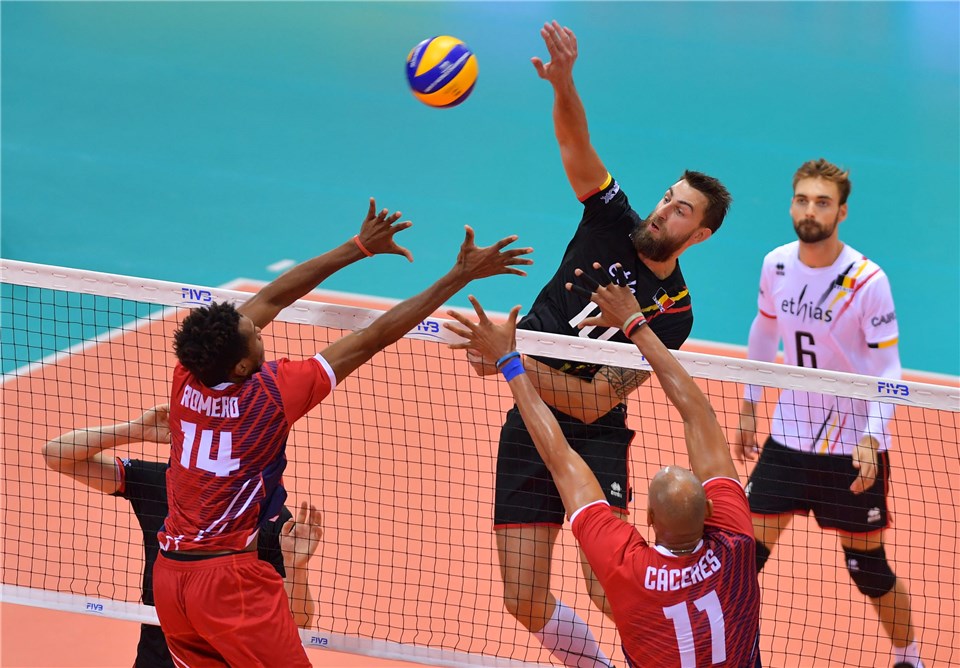 Simon Van De Voorde helped Belgium secure a win over the Dominican Republic and a spot in the next round.  Current Photo via FIVB

Belgium qualified with a win over the Dominican Republic. The Dominican Republic are one of two teams from the NORCECA who will go home without a win. Argentina beat Slovenia and puts themselves in a favorable position to get the last spot from Pool A. They face Japan on Tuesday and just need a win or a loss in 5 sets to secure advancement.

Belgium pulled off an important win that secured their spot in the next round. They did so at the expense of a win-less team from the Dominican Republic who had already been eliminated. They put their foot on the gas pedal and never let up, keeping their opponents to under 20 points in every set. They owned the net with 14 blocks as opposed to 3 for the Dominican Republic. Belgium also out-performed them from the service line with a 5 to 1 advantage in service aces.

Belgium was led by Hendrik Tuerlinckx and his 14 points. He produced 10 kills, 2 blocks, and 2 service aces. Igor Oskar Grobelny also scored double-digit points with 13 points on 10 kills and 3 blocks. Simon Van De Voorde, the tournament’s leading blocker at this point, averaged 1.33 blocks per set to finish with 4. He also chipped in 4 kills to finish with 8 total points on the night. Sam Deroo only played in the first set for Belgium and scored 1 point from an ace. He was 0 for 4 in kill attempts. Their setter, Matthias Valkiers, set Belgium to a 51.4% hitting percentage in the victory.

The Dominican Republic did not have much to celebrate in the win. Henry Tapia led the team with 8 points on 8 kills while hitting 42.1% after replacing Jose Caceres after the first set. Caceres scored 6 points on 6 kills with a 50% attack average. Hector Cruz was used as a substitute in the first and third sets. He was tied for the second-most points for the Dominican Republic with 6. He put away 5 kills and scored on an ace.

“This was an easy match, since they were already out of the competition, while we were concentrated and did our job,” said the Belgian coach, Andrea Anastasi. “It is good that we did not suffer any injury and we are now ready for the second phase of the tournament.”

Argentina picked up an important win on Monday over Slovenia, a team already qualified for the next round of the tournament. They fought back from being down 1-2 and took the match to remain in a favorable position to qualify out of Pool A. They will face Japan, who sits at 1-3 so far, on Tuesday. A won or a loss in 5 sets will see Argentina through to the second round.

Argentina was led by Bruno Lima. The starting opposite scored 18 points on 17 kills and a block. Though he started strong, he only scored 1 point in the tie-break. Cristian Poglajen scored 4 of his 16 points in the last set. He finished with 15 kills and 1 ace. Lisandro Zanotti came in for Facundo Conte and scored 13 points while only starting in the final 2 sets. He put away 11 kills and put up 2 blocks. Conte and Sebastian Sole led the match with 4 blocks each. Argentina held a 14 to 5 advantage in blocks over Slovenia.

Mitja Gasparini posted a match-high 19 points in the defeat. He matched Lima with 17 kills to go along with 2 aces. Tine Urnaut scored 16 points on 16 kills while hitting 38.1%. Klemen Cebulj came off the bench in the first set and scored 16 points on the left side from 13 kills, 2 blocks, and 1 ace. Slobodan Kovac used both Gregor Ropret and Dejan Vincic at setter, but they could not find the right combination to get the win.

Cristian Poglajen of Argentina said, “It was a very close game; we had the goal of taking at least two points, ideally three. The key to success was the service and defence. Personally, I think I improved the level of my performance as the match progressed.”