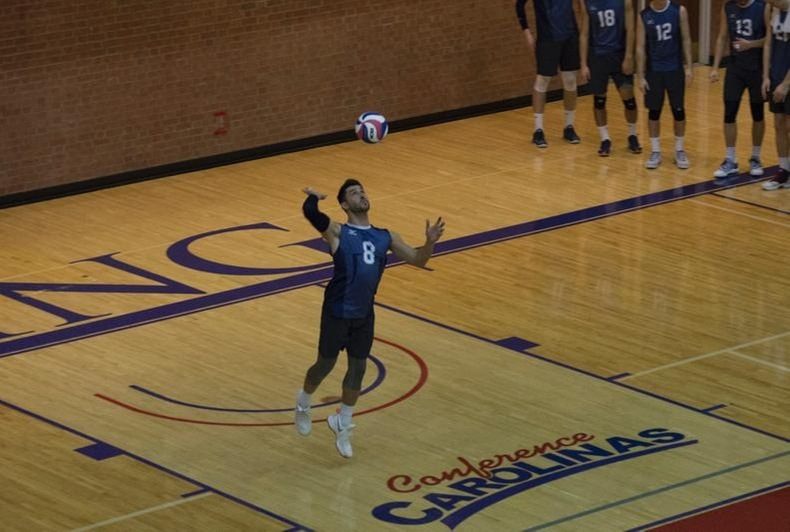 It has been a record-breaking 2017 season for the King University men’s volleyball team, and the Tornado made more history with a sweep of Pfeiffer University on Tuesday night. The 3-0 win gave King their 12th straight win and 11th win in Conference Carolinas play, both program records.

After falling handily to King 25-6 in the first set, Pfeiffer made it a competitive game in set two as they fell behind early 12-3. Joe Wilber was a part of three of four Falcon points, as he had two assists and a kill to cut the Tornado lead to 14-8.

Later in the set two, the Falcons continued to play from behind and  were still fighting as cut the King lead to smallest of the set, 21-16 with a double  block from Trent Tursich and Wilber, but the Tornado were able to pull away to win the set 25-17.

Set three, King took the first two points, but then Pfeiffer came back to rally of two of their own with a kill from Pfeiffer match leader(9), Jesse Print. Pfeiffer and King traded points as the Falcons kept it close at 12-10. Print, Corbin Keller and Roberto Soares all helped in the sequence.

At 16-12, King started to pull away but the Falcons again hung in their strong as they won consecutive points off of Tornado errors to make it 16-14. The talented Tornado pulled away late in the set and go onto win 25-18.

Pfeiffer returns to action on Saturday as they host Barton at 4 p.m. inside Merner Gymnasium.