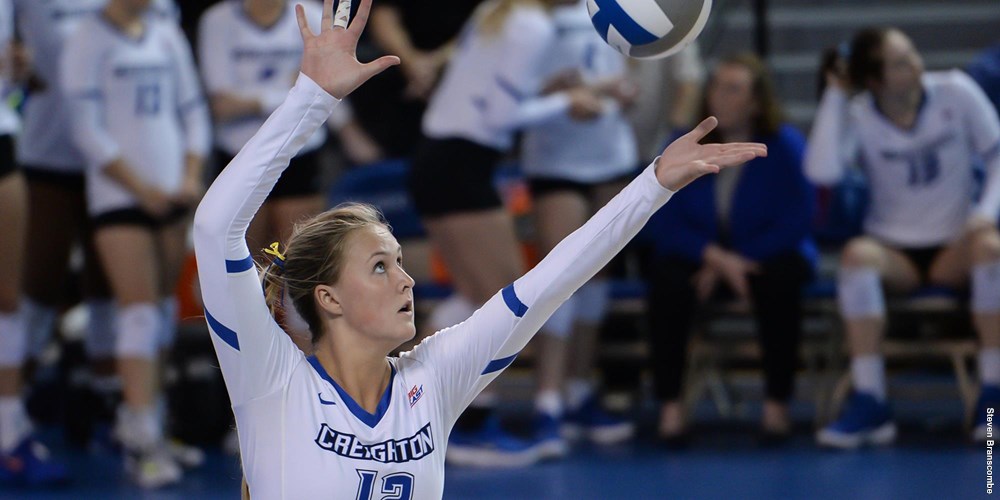 NEW YORK – After strong performances over the first weekend of BIG EAST conference matches, Creighton’s Taryn Kloth and St. John’s Amanda Sanabia earn Offensive and Defensive Player of the Week awards, respectively, while Villanova’s Clare Delaplane collects Freshman of the Week honors after securing the nod after week three. The 10th-ranked Bluejays defeated both visiting DePaul and No. 21 Marquette in 3-0 sweeps. After falling at Georgetown last Wednesday, the Red Storm beat visiting Xavier and Butler, both in five sets. The Wildcats defeated Seton Hall on Wednesday before falling to Georgetown in five sets on Saturday.

Kloth averaged 4.50 kills and 5.08 points per set, while hitting .440 over the weekend where the Bluejays secured conference wins over visiting DePaul and No. 21 Marquette. She had 11 kills and hit .409 versus the Blue Demons and added 16 kills, while hitting .464 against the nationally-ranked Golden Eagles. Kloth also averaged 1.17 digs and 0.50 blocks in the two victories. Kloth is now averaging 4.86 kills per set on .310 hitting in five matches against top-25 competition this fall, and leads the BIG EAST with 218 overall kills.

🏆🏅🎊
Congratulations to Taryn Kloth on earning this week's BIG EAST Offensive Player of the Week award!#GoJays

In three BIG EAST matches last week, Sanabia averaged 5.33 digs and 0.80 assists per set. The Red Storm went 2-1 with five-set wins over Xavier and Butler, along with a 3-2 loss at Georgetown. She set a career high with 32 digs against Xavier then followed that with 31 against Butler. Both performances were match highs for the week, as she helped hold St. John’s opponents’ hitting average to .162. Sanabia currently ranks second in the BIG EAST in digs per set with 4.99.

Congrats to #SJUVB Amanda Sanabia for being named BIG EAST Defensive Player of the Week!

The rookie averaged 4.00 kills and 2.33 digs per set over the weekend, recording a season-high 22 kills in a win versus Seton Hall. She also added 12 digs against the Pirates to secure the double-double. In a five-set loss to Georgetown, Delaplane had 14 kills and nine digs. The freshman also averaged 4.56 points and 0.78 blocks per set, while hitting .250 in the two matches.