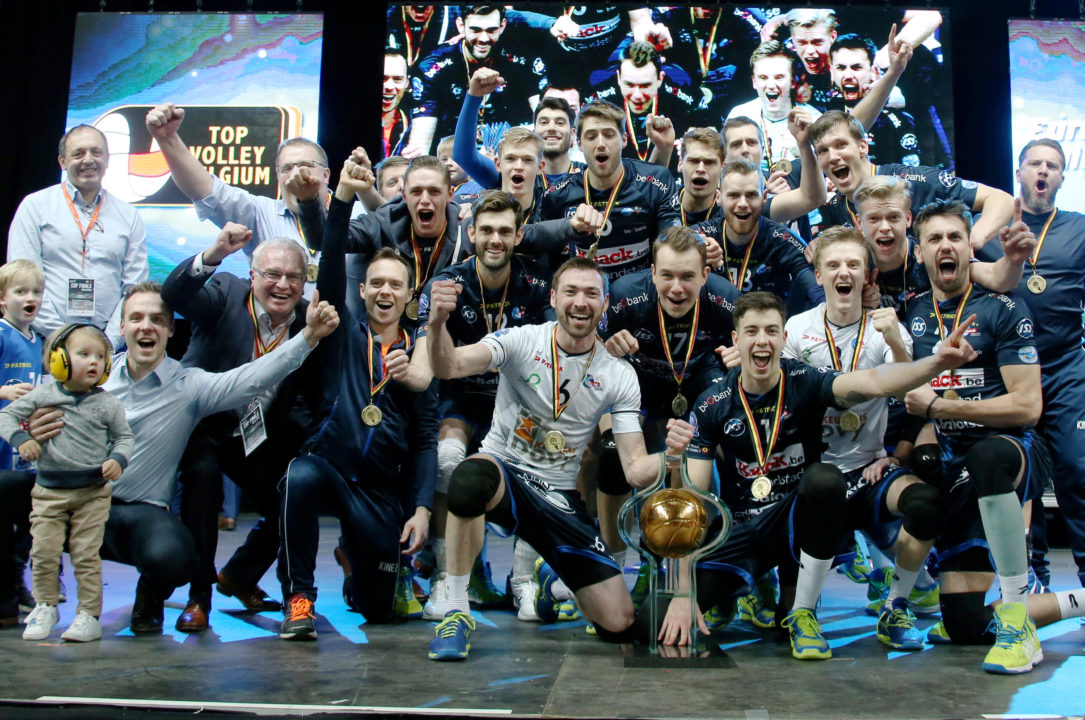 Knack Roeselare defeated its biggest rival Noliko Maaseik to win its third Belgian Cup title in a row in front of 10,000 fans. Such a turnout is very uncommon for volleyball games, even at the sport’s most elite leagues.

The first set of the game was very balanced, with Roeselare only able to open up a two point lead at 15-13, but the game quickly went back to a tie again at 17-17. This was when Pieter Coolman stepped up for Roeselare, scoring two aces to help his team close the set at 25-22. In the second set, Roeselare opened up a small 10-7 lead. Maaseik’s Kamil Rychlicki had a strong service run to help his team turn the game around at 19-17. Both teams were even up until 23-23, but Roeselare committed a service error which closed the set at 25-23 for Maaseik.

The third set saw Roeselare storm out of the gates to take an early 11-7 advantage. Maaseik tried coming back into the set, coming as close as 12-13 but Roeselare’s defense was just too confident, allowing the team to comfortably close the set at 25-16. Maaseik went all or nothing at the beginning of the fourth set, knowing that it needed to win it to force a tie break. The team opened up a 6-2 lead, but wasn’t able to hold on to it, as Roeselare quickly turned things around 8-7 and then 12-8. Maaseik was able to recover and tie it at 17-all, but things imploded when it lost its top scorer Rychlicki to a muscle injury. From then on, Roeselare had the upper hand and closed the set at 25-23. Hendrik Tuerlinckx led the way with 24 points, while Jolan Cox had 16 in the losing effort.

Here are the post match reactions, courtesy of FIVB:

“We were really ready for this game. The whole week we felt focused in the build-up towards this Cup final. Once again, we showed we could fight on such an important occasion. This victory feels even better than last year’s win against MAASEIK, since their opposition was tougher this time.” Roeselare’s Matthijs Verhanneman

“I am disappointed, especially since Knack ROESELARE didn’t play very well. However, that means we were even worse. This game also proves no one is the favorite for such a final, even if we were 3-0 up in our previous encounters this season.” Noliko’s captain Jelte Maan

A post shared by KnackVolleyRoeselare (@knackvolleyroeselare) on Feb 18, 2018 at 7:46am PST