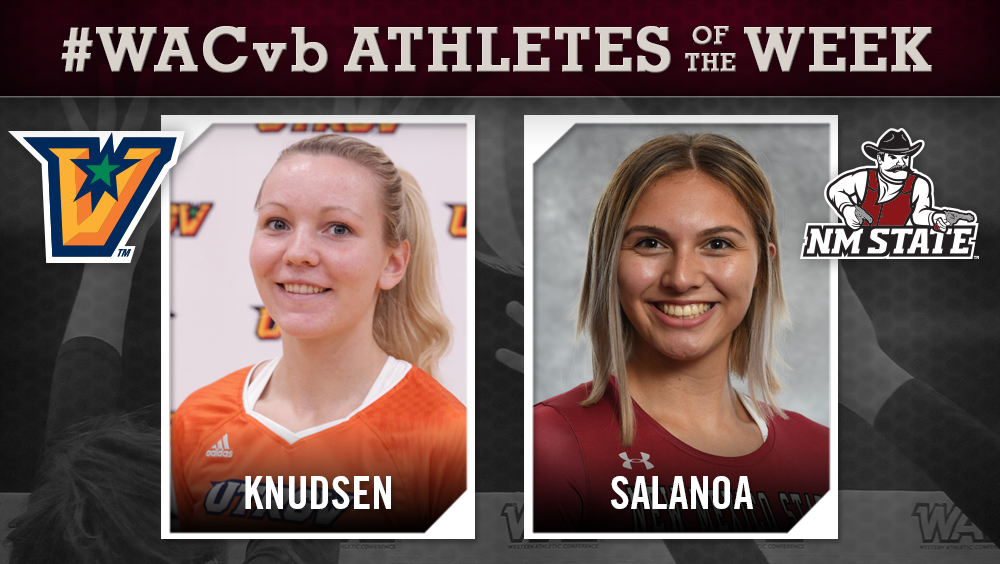 DENVER – UT Rio Grande Valley senior outside hitter Ragni Steen Knudsen and NM State sophomore middle blocker Julianna Salanoa have been named the Western Athletic Conference Offensive and Defensive Volleyball Players of the Week, respectively, for the week of Oct. 1-7. This is the third honor of the season and her career for Knudsen and the first-ever honor for Salanoa.

Knudsen, a Myre, Norway native, led the WAC in points per set (5.29), kills per set (4.71) and hitting percentage (.342) last week as the Vaqueros went 2-0 on the week with a pair of road wins to move into first place in the WAC standings. Steen opened the week with a match-high 17 kills to go along with two service aces in a sweep of Chicago State. She followed it up with a match-high 16 kills in a four-set win at Kansas City. She also had double-doubles in both matches. Steen moved her career kills total to 1,124 during the week to move into sixth place all-time at UTRGV.

Salanoa, an Olympia, Wash. native, led the WAC with 2.67 blocks per set, almost one block per set more than any other player, as the Aggies swept a pair of road matches last week. Against Kansas City, she tallied a career-high nine blocks and was one shy of posting her first career double-double as she also had 10 kills in the match. On Saturday at Chicago State, Salanoa finished with a match-high seven blocks. She also recorded a pair of digs on the weekend.