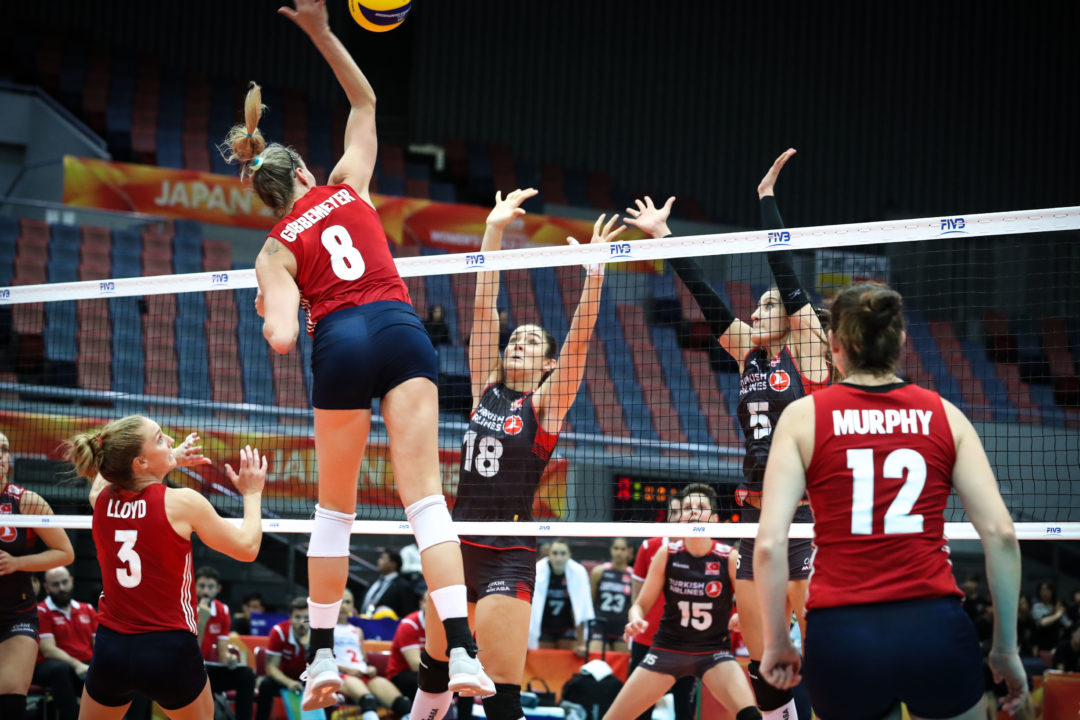 The U.S. Women's National Team rolled through Turkey in a VNL Finals rematch, as they are one of 4 still up for a top 3 spot in Pool F. Archive Photo via FIVB

Day two of Pool F was all about the favorites, as the top four teams coming into the day remained that way after its conclusion.

The result though isn’t a shift in the standings, it’s that the top four and bottom four have separated enough to where the last half has been eliminated now from any chance at earning a top three spot – being that the top three advance on to the next round.

That leaves four nations down for three spots, with two teams at 7-0 and two at 6-1. It’s only fitting that for the final two matches in Pool F on October 10 and 11 – with an off day tomorrow – that those teams will square off to determine which three makes the cut.

Back in the Volleyball Nations League, these nations met three times, with the entire trio of matches going to five sets. That included one Turkish victory, and two for the United States that featured a Volleyball Nations League championship to end a Cinderella run from Turkey. This time, the U.S. Women’s National Team had no issues and rolled through Turkey in three.

“We had three spectacular battles with Turkey during Nations League and each of those three went to five sets, so we expected another very fierce battle today,” United States head coach Karch Kiraly told FIVB. “We respect that team a lot and coach Giovanni Guidetti does a great job with them. Our game plan went well today and so we are happy with the result.”

Once again it was all about balance for the U.S., who have sported that all year and tournament. Four players had double-digits in Kelly Murphy (12 points), Jordan Larson (10 points), Kimberly Hill (10 points) and Foluke Akinradewo (10 points). Compare that to Turkey, who didn’t have a single individual reach that plateau, with Zehra Gunes (9 points) and Meliha Ismailoglu (7 points) the closest.

“We are incredibly fortunate to have 14 players here and others who are not here who we trust to make good plays in matches like today, whoever we have on the floor,” Kiraly also said. “We do not necessarily want to depend on one player, we try to have an offense that is more evenly distributed and it is more difficult for opponents to plan for.”

The Americans wound up with more kills (40-35), blocks (8-2), aces (4-3), digs (28-27) and still seven less errors. The block was the biggest contributor, as it not just swayed the attack and error numbers as well, but also led to a large discrepancy between the two sides. It never really felt in doubt that they would lose the match.

“I thought we had a great sense of urgency and a great game plan going in,” United States’ captain Jordan Larson told FIVB. “I thought we executed very well. Obviously we respect the Turkey national team very much but today was just a great match for us.”

Turkey’s captain, Eda Erdem (6 points), also was mighty impressed with the American side: “Right now America are one of the best teams in the world. They play so fast and are really, really good. There is nothing much to say. They were much better than us in every position.”

For Turkey, their run comes to an end as they can’t re-muster the magic of that run in the Volleyball Nations League. They’ll still look to finish on a high note against Azerbaijan and Thailand.

Things won’t get any easier moving ahead for Team USA, who now gets top-ranked China (6-1) before they take on Italy (7-0) in their Pool F finale.

“We know China is a great team and they are led by one of the strongest international players around in Zhu Ting,” Kiraly added to FIVB. “I want a few minutes to enjoy this win before we start thinking about China in over two days from now.”

In the closest of the four matches for Pool F on the day, Bulgaria battled Russia tightly but couldn’t pull off the upset. Instead, the Russian side came away with a four-set victory behind a dynamic duo of scorers.

The winning nation was led by Kseniia Parubets (22 points – 20 spikes, 2 blocks) and Irina Voronkova (19 points – 15 spikes, 2 blocks, 2 aces), while no one else had double-digit scoring. The Russians were once again without Nataliya Goncharova, who led first-round scoring with 119 points but is getting shoulder surgery.

Still though, considering what Parubets and Voronkova did to lead the way, the top four for Russia still out-scored that top four for Bulgaria (59-57). Russia also got more points from those below the top four, as they wound up with more spikes (61-54), aces (6-4), digs (41-33) and five less errors. Bulgaria did have the better block (12-11).

Still, after falling behind 2-0 in sets, Bulgaria fought back and won a tough third. It wouldn’t be enough though as similar to the first and second, they just couldn’t get over the hump and make a late charge in an upset bid.

“The main problem in our team as you can see is losing concentration,” Bulgaria’s captain Hristina Ruseva told FIVB. “We are a really young team but, of course, this is not an excuse. We played at a really bad level. Russia have too much experience and they used this moment to win easily.”

Bulgaria will round out the tournament with Thailand and Azerbaijan. Russia will face Italy, a 7-0 team, and then China, the other 6-1 nation. Their captain noted that they will have to play better moving forward.

“Today’s match was not so good because we made so many mistakes, but finally we could focus and get the victory,” Russia’s captain Evgeniya Startseva told FIVB. “We need to think about all the mistakes we made.”

China came out with a strong performance against Azerbaijan, outscoring their opposition 75-50 for the match, with powerful play at the net.

That came as China dominated the stat sheet in kills (45-31) and blocks (9-4). They were also extremely efficient in logging just seven errors to Azerbaijan’s 14. Meanwhile, Azerbaijan couldn’t get a kill down and were out-dug (36-24), although they did have more aces (8-7) than China.

“We knew that China were a very strong team,” Azerbaijan’s assistant coach Famil Abhayev told FIVB. “They served well and we could not receive well, so this was a bad point in our play. The first and third sets went quite well because we could keep up with China but in the second set we let them get too far in front early on and we could not catch up.”

Early on, Polina Rahimova (11 points) came up big for Azerbaijan with six first game points. Yelyzaveta Samadova (8 points) also had three in the opening frame as they stuck with China a bit.

Too much Yuan Xinyue (17 points), Gong Xiangyu (13 points) and Zhu Ting (12 points) though pushed China to the early lead, which they never looked back on.

“Everybody played well on the Azerbaijan side and at the beginning we could not get into our rhythm,” Gong Xiangyu told FIVB. “Gradually our serve got better and we started blocking more effectively and this enabled us to win the match.”

China will round out Pool F against the United States (7-0) and a fellow 6-1 team in Russia. Azerbaijan can’t move on, but they can still finish strong as they face Turkey next on October 10 before meeting Bulgaria the next day.

Italy was absolutely dominant in a sweep against a solid Thailand bunch, as they look ready to go for their final two matches in which one win guarantees them a spot in the third round.

Helping Italy jump ahead early were Paola Ogechi Egonu (15 points), Miryam Fatime Sylla (8 points) and Cristina Chirichella (12 points), who combined for 14 first set points while Thailand had 15 as a team.

“Today we played really good, especially in block defence,” Chirichella told FIVB. “It was really important because the Thai game is so fast so we have done a great job on defence. This result was really important for us to qualify for the next round. The trip is already long so for now it is a good result. We know about the last results for Thailand (against USA and Russia) and we know Thailand was strong and at the same time play a great game, so we were so concentrated about particular things. We have done the best we can.”

Other notable performers in the match for Italy were Anna Danesi (11 points) and Lucia Bosetti (7 points). For Thailand, Onuma Sittirak (13 points) was solid and Pleumjit Thinkaow (5 points) efficient, but everyone else for the side combined for just 13 points and 12 kills on 50 attempts.

“The Italian block and defence is very strong so this made it a hard match for us, Thailand head coach Danai Sriwachamaytakul told FIVB. “Unfortunately we could not play our own style. We did not get used to the power of Italy.”

Italy will look to keep rolling with a tougher test against Russia (6-1) next before they finish up with the United States (7-0). A win on October 10 would secure a top three spot though. For Thailand, they will try to end on a high note as they can’t make the top three, but still have matches with Bulgaria and Turkey.