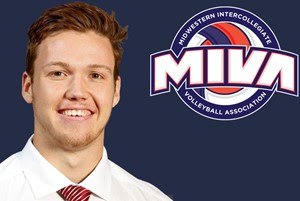 The Midwestern Intercollegiate Volleyball Association (MIVA) announced on Tuesday (Jan. 24) that Lewis University’s Mitch Perinar (Channahon, Ill./Minooka) has been selected as the MIVA Offensive Player of the Week for the period ending January 22nd.

“I’m excited for Mitch, because he has been working hard and played great for us (last) weekend,” Lewis head men’s volleyball coach Dan Friend said. “He was a consistent force and was a catalyst for us in both five-set road wins.”

The Channahon, Ill., native notched a career and team-season high 27 kills, while hitting .478 (27-5-46) in the five-set win over St. Francis (PA). Those 27 kills are the second-most in the country for a five-set match this season. He finished that match with 29.5 points against the Red Flash, including five block assists.

Perinar was equally as impressive against the Nittany Lions, collecting 15 kills and hitting .406 (15-2-32) with three block assists.

Lewis returns to action on Friday (Jan. 27), as the Flyers head to Arizona for a 7 PM MT match-up with Grand Canyon.