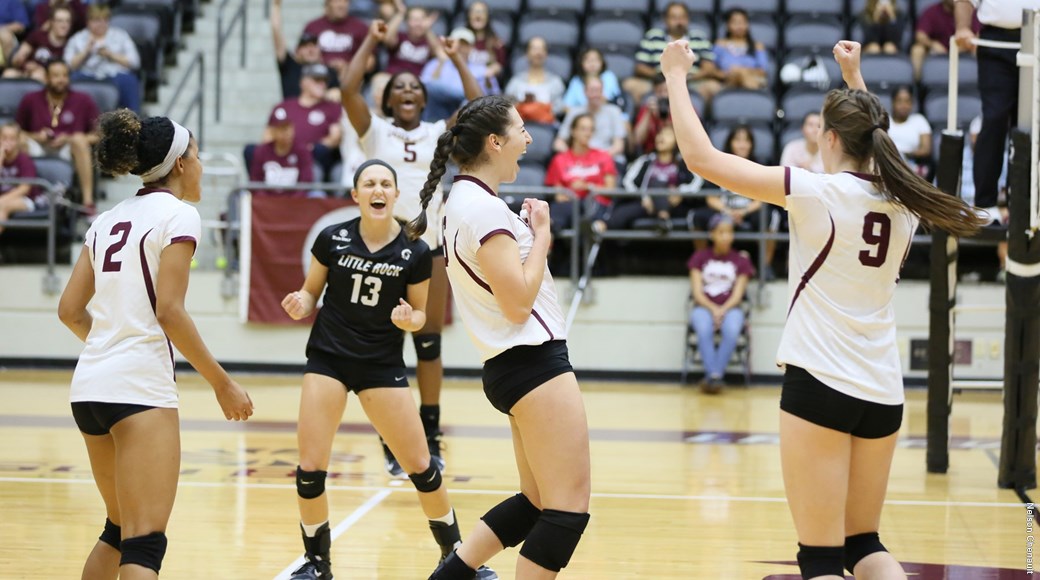 The Trojans are set to play 29 matches in 2018, including seven home matches at the Jack Stephens Center, and 12 against teams that finished in the top 150 of last year's RPI.  Current Photo via Little Rock Athletics

The Trojans are set to play 29 matches in 2018, including seven home matches at the Jack Stephens Center. Of the 29 matches, 12 of those will come against teams that finished in the top 150 of last year’s RPI. Two of Little Rock’s opponents were NCAA Tournament participants last season while three others participated in the NIVC Tournament.

“We have a good strength of schedule this season,” Compton said. “That’s always good to me because it prepares you for postseason opponents. We’re on the road for the first month during non-conference play, and I think that will prepare us for playing our nine road matches in Sun Belt play. We do the same thing in non-conference play most years, and I believe that makes us a better team on the road.”

On Aug. 31 and Sept. 1, Little Rock will take part in the Rebel Invitational in Oxford, Mississippi. The Trojans will face Lamar in the first day of competition before turning their sights to Southern Miss and Ole Miss on the second day.

Little Rock’s final non-conference tournament will take them to the Big Easy for the Allstate Sugar Bowl Collegiate Volleyball Classic at Tulane on Sept. 14 and 15. The Trojans will face the host Green Wave in the first match of the tournament before turning their attention to Clemson later in the day. Little Rock will conclude its non-conference schedule against Villanova on the final day of competition.

The Trojans’ home opener and conference opener will take place on Sept. 21 against South Alabama. Little Rock will conclude the opening weekend of Sun Belt action by hosting Troy on Sept. 22.

After their first two matches at home, the Trojans will begin a four-match road trip on Sept. 28 at Texas State. Little Rock will close out its tour of the Lone Star State by visiting UT Arlington on Sept. 29.

Little Rock will continue its road trip by visiting the Carolinas the following weekend. The Trojans’ first stop will take place at Appalachian State on Oct. 5 and will conclude at Coastal Carolina on Oct. 7.

After the long road trip, the Trojans will make a quick stop at home to face Louisiana on Oct. 12 and ULM on Oct. 13.

Little Rock will then have a week to prep for its first rivalry match at Arkansas State on Oct. 20. The three-match road trip will continue on to the Peach State as the Trojans face Georgia Southern on Oct. 27 and Georgia State on Oct. 28.

After its swing through Georgia, Little Rock will come home for its final three home matches of the season. The Trojans and Red Wolves will once again tangle on Oct. 30 — just 10 days after their first meeting of the year. Little Rock’s last weekend of home matches will feature UT Arlington on Nov. 2 and Texas State on Nov. 3.

Little Rock will conclude the regular season down on the bayou with matches at Louisiana on Nov. 9 and at ULM on Nov. 10.

This year’s Sun Belt Conference Volleyball Championship will take place in Atlanta, Georgia, on the campus of Georgia State. The tournament will run Nov. 15-18 at the GSU Sports Arena.

Season tickets are now available for purchase through the Little Rock Ticket Office. Fans can purchase general admission tickets for $40 each or they can take advantage of the $99 flex pack that includes 20 ticket vouchers that are good for any of Little Rock volleyball’s 2018 home matches. To purchase, call 501.565.8257 or mail in the enclosed order form.