Coming off a 2017 season including a perfect Big West season and its first NCAA Tournament win since 2007, Cal Poly announced its 2018 slate including 10 home matches.  Current Photo via Cal Poly Athletics 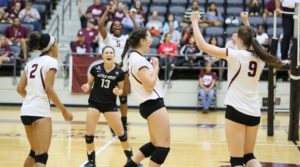 The Mustangs will begin the season on the road August 24, traveling to Pittsburgh, Penn. to compete in the Panther Challenge where they will take on Pepperdine, reigning ACC champion Pittsburgh, and Butler.

They then travel to Logan, Utah for a tournament where they will face Loyola Marymount, University of Texas Rio Grande Valley and Utah State.

Upon returning from Utah, Cal Poly will host UCLA for two matches on back-to-back nights September 6 and 7 at 7 p.m. from Mott Athletics Center. The Bruins ended the Mustangs’ season last year in the second round of the NCAA Tournament.

Cal Poly then travels to Denton, Texas for a three-match tournament to finish the non-conference portion of the schedule. There, they will play against Mississippi State, defending AAC champion Wichita State (who the Mustangs beat last season), and host school North Texas.

The Mustangs then come back to San Luis Obispo to open Big West play on Tuesday, September 18 hosting UC Davis. They then go back on the road to play Cal State Fullerton and UC Riverside September 21 and 22. After that, they are home again September 28 and 29 against CSUN and Long Beach State, both at 7 p.m.

After that, Cal Poly will host Central Coast foe UC Santa Barbara October 12, the first Blue-Green rivalry match of the season. The other will take place November 2 in Santa Barbara.

Following the October 12 match against the Gauchos, the Mustangs will travel to CSUN and Long Beach State October 19 and 20. They will then travel west to face Hawai’i in Honolulu October 26. That is followed up with a home match against UC Irvine October 30 at 7 p.m. The Anteaters finished third in the Big West last season.

After the road match against the Gauchos, the Mustangs will play its final road matches of the season, traveling to take on UC Davis on November 8 and UC Irvine November 10.

They return home the following weekend for the final home matches of the season. They will play UC Riverside on November 16 and Cal State Fullerton for senior night November 17. Both matches are scheduled for 7 p.m.

Head coach Sam Crosson (90-79, 52-47 BWC) was named 2017 Big West Coach of the Year and Taylor Nelson was named Big West Player of the Year. The Mustangs also had six players named to the All-Conference Team and one (Madilyn Mercer) to the All-Freshman Team.

The Mustangs return 10 from last year’s squad, including three who were named to the All-Conference Team in Adlee Van Winden, Torrey Van Winden and Katherine Brouker. A transfer from Duke and three incoming freshmen will join them this upcoming season.

Cal Poly students always get into games for free, and are also invited to join the Stang Gang. Stang Gang, Cal Poly’s student fan group, features several rewards for a $10 one-time lifetime registration fee, including prizes from sponsors such as Woodstock’s Pizza, Eureka! and VISA, a member T-Shirt, and more upon reaching point levels by checking in at games.