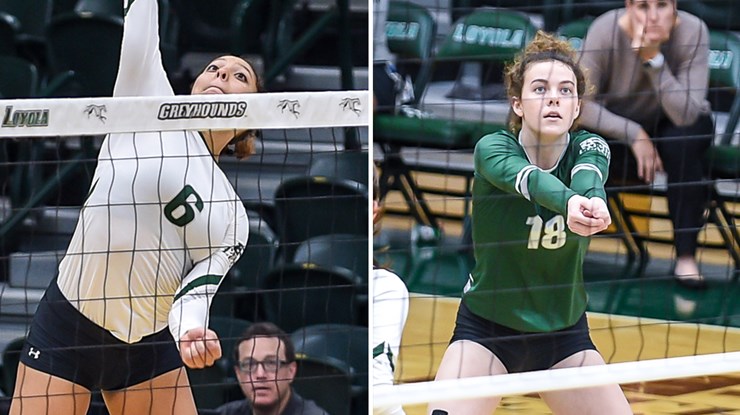 For the second week in a row, the Loyola Maryland Greyhounds swept the Patriot League awards as junior outside hitter Ann Ernst was named Player of the Week and libero Katie Forsythe was selected as rookie of the week. Current Photo via Loyola Maryland Athletics

CENTER VALLEY, Pa. — For the second week in a row, the Loyola Maryland Greyhounds swept this week’s volleyball awards as junior outside hitter Ann Ernst was named Patriot League Volleyball Player of the Week and teammate freshman libero Katie Forsythe was selected as rookie of the week, when it was announced by the League office on Monday.

Ann Ernst, Loyola Maryland, Jr., OH, Chicago, Ill.
* Ernst averaged 4.43 kills and 3.29 digs per set while hitting .273 from the outside this past week in the team’s wins over Bucknell and Colgate.
* The junior started last week with a double-double (16 kills and 18 digs) as the Greyhounds defeated Bucknell, to go with a .281 hitting percentage.
* Against the Colgate Raiders, she led all players with 15 kills in three sets as the team notched its first-ever Patriot League sweep over Colgate.
* Ernst currently leads League players with 4.19 kills per set, and is the only non-middle blocker in the top-10 in hitting percentage (.260).

Katie Forsythe, Loyola Maryland, Fr., L, Perry, Ohio
* Forsythe combined for 44 digs in just seven sets as the Greyhounds went 2-0 this past week against Bucknell and Colgate.
* The rookie had 24 digs on Saturday afternoon against Bucknell in a four-set win, before she nabbed 20 digs in three sets versus Colgate.
* She averaged 6.29 digs per set in the two matches, a total just above what she entered the weekend with (6.13) which was second in NCAA Division I.

Aleksandra Kazala, American, Sr., OH, Debica, Poland
* Kazala earned a season-high 21 kills versus Lehigh, including 17 in the final three sets. She posted seven of her 14 kills vs. Army West Point in the first set.

Allie Strong, Army West Point, Jr., OH, Overland Park, Kan.
* Strong led the Black Knights offensively this past week with 3.00 kills per set and a .279 hitting percentage, to go along with 3.00 digs per set and three blocks. She also had 24 kills on the weekend against American and Bucknell.