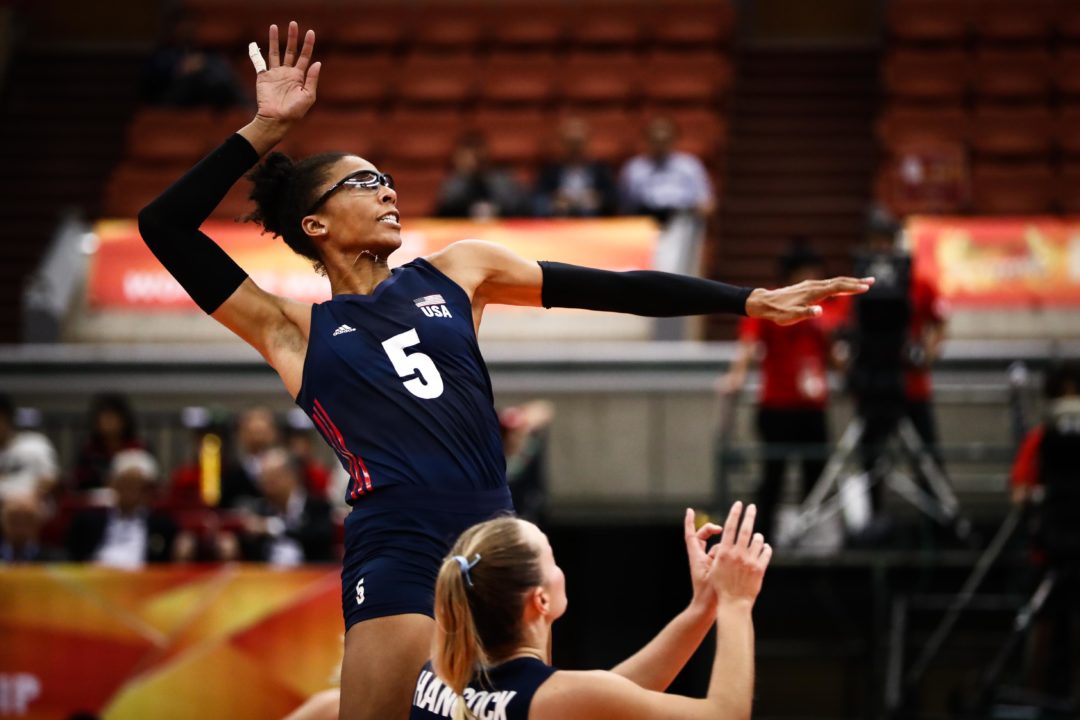 In spite of big play from their middles, including Rachael Adams, all week long, the Americans didn't have enough to advance to the semi-finals of the World Championships. Current Photo via FIVB

After another 3-2 loss on Monday at the 2018 FIVB Women’s Volleyball World Championship at the hands of the Netherlands, the American women have been eliminated from title contention at the tournament. Instead, they’ll play in Friday’s 5th-place match in Yokohama, where they’ll likely play hosts Japan (who are currently down 2 sets to 1 and are losing in the 4th). The final score was 3-2 (30-32, 15-25, 25-22, 25-15, 15-9).

The American women, in spite of winning the Nations League earlier this year, never really looked fully in-rhythm at these World Championships. Their outside hitters, including Nations League MVP Michelle Bartsch-Hackley, struggled, and their middles, who conversely played very well, weren’t enough to lift the US to a Final 6 win against the Netherlands that they desperately needed to have a chance to advance.

American head coach Karch Kiraly was willing to make the switches in the loss that he wasn’t earlier in the tournament. After the first set, which the US actually won 32-30, he sent starting setter Carli Lloyd, starting outside hitter Kim Hill, and starting opposite Kelly Murphy to the bench. In their stead, he brought on setter Micha Hancock, opposite Karsta Lowe, and outside Bartsch-Hackley. The short-term returns were astounding, with the US dominating the 2nd set to take a 2-0 lead.

Dutch coach Jamie Morrison had a reserve up his sleeve as well, though, and he brought on the young Celeste Plak to start the 3rd set, and she lifted her team to a full turnaround, with a tight 3rd set win, and dominant victories in the 4th and 5th sets. She became the help that opposite Lonneke Sloejtes (38 points) needed to take the pressure off.

That means that World #1 China and World #8 the Netherlands will move on to the semi-finals, where they’ll probably face Serbia and Italy in some order (depending on the outcomes of Tuesday’s head-to-head matches between the aforementioned teams).

If we draw a contiguous history from the predecessor World Grand Prix tournament, which ran from 1993 through 2017, into the Nations League, which launched this year, this marks the first time in history that the winner of the global league-format tournament at the start of the summer hasn’t finished at least in the top 4 at the same year’s World Championships. The American odds at the title seemed like a longshot anyway: no ntion has ever pulled off the double in 6 tries coming into 2018.