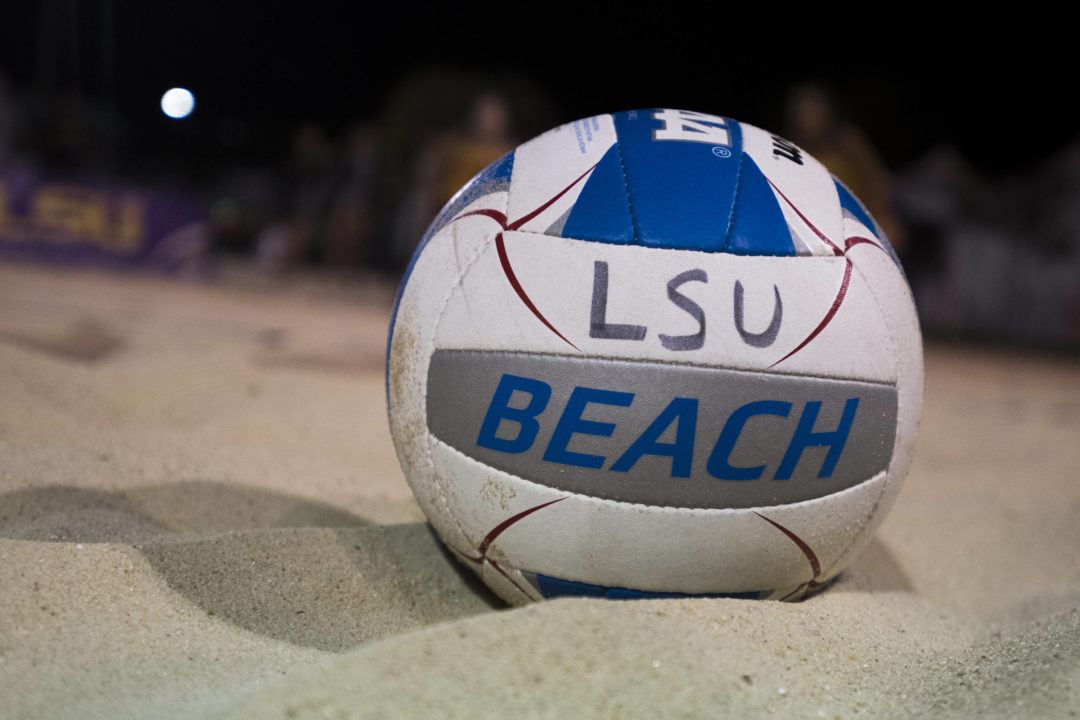 The seventh-ranked LSU beach volleyball team fell in both of its matches, 3-2 against No. 1 Pepperdine and 4-1 to No. 9 South Carolina, in the final day of the Gamecock Grandslam at Wheeler Beach on Sunday. Current Photo via MG Miller/LSU Athletics

The seventh-ranked LSU beach volleyball team fell in both of its matches, 3-2 against No. 1 Pepperdine and 4-1 to No. 9 South Carolina, in the final day of the Gamecock Grandslam at Wheeler Beach on Sunday.

The Tigers drop to 7-9 on the season.

“You have to give credit to the teams we played this weekend for playing really well against us, but we owe it to LSU and our program to represent better,” said head coach Russell Brock.

The match against Pepperdine started off with the Court 4 duo of Haleigh Nelson and Maddie Ligon falling in two sets, 21-17 in both of them. On Court 5, Riley Young and Gina Tillis forced a third set with a 21-19 set two victory after falling to open the match, 21-17. The duo dropped the final set, 15-11, giving Pepperdine a 2-0 lead in the overall match.

On Court 1, the Tigers came back with Claire Coppola and Kristen Nuss. The due won the first set 21-18. To get LSU on the board, Coppola and Nuss won the second set, 23-21.

Olivia Powers and Hunter Domanski won the first set on Court 2, 21-13. Pepperdine came back, winning the next two sets, 21-13 and 15-8, clinching the match for the Waves.

Heading into the final match of the Gamecock Grandslam, LSU was 6-0 all-time against South Carolina.

The first two matches of the day went to three sets. Nelson and Ligon fell in set one, 21-18, before coming back in the second set, 21-17, on Court 4. In the deciding set, the duo fell, 15-12. On Court 5, Young and Tillis jumped out to take the lead with a 21-17 win in set one. South Carolina would rebound with a 22-20 victory over the LSU duo, forcing a third set. Tied at 12, Young and Tillis were unable to get the victory as South Carolina took it, 15-13, giving the Gamecocks a 2-0 lead in the overall match.

LSU got its first and only point of the match on Court 1, where Coppola and Nuss finished their undefeated weekend, winning in consecutive sets, 21-16 and 21-9.

“I’m really proud of Claire and Kristen,” said Brock. “They were definitely playing at a really high level. Their weekend was impressive.”

The Tigers will be home for the first time this season, next weekend when they will host the Tiger Beach Challenge and play in five matches at Mango’s Beach Club of of Sherwood Forrest.

“We are ready for a long home stretch,” said Brock. “We need the chance to play at home and get in a rhythm.”