LSU Beach Wins Big In First Exhibition Of The Season 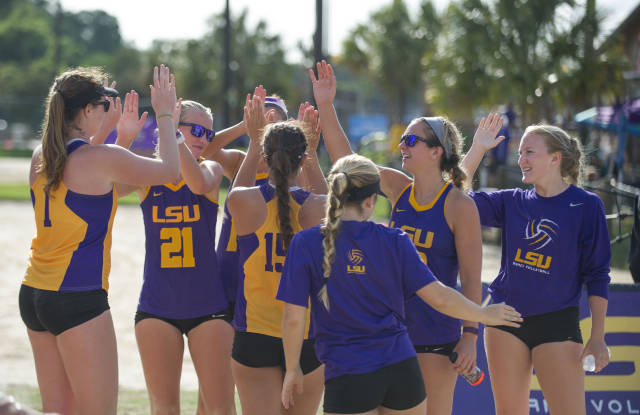 The LSU beach volleyball team finished up their first exhibition of the season with a victory at the Collegiate Beach... Current Photo via LSU Athletics

The LSU beach volleyball team finished up their first exhibition of the season with a victory at the Collegiate Beach Bash. The team posted an overall record of 42-14 to secure the win.

The team came out in dominating style, sweeping 19 matches on the day and at least one from every pair.

“This was a very rewarding result that really validates all the work we’ve been doing this fall,” said associate head coach Russell Brock.

Four freshmen helped lead the Tigers to victory. The number one position of Mandi Orellana and freshman Claire Coppola picked up six victories on the day, with wins coming from Georgia State’s No. 1 pair and South Caronlina’s No. 2 pair with scores of 21-14, 21-18 and 21-17, 21-14, respectively.

The No. 2 squad of Katie Lindelow and Maddie Ligon picked up wins against South Carolina’s No.2 and No. 3 pair as well as the No. 2 pair for Georgia State.

The freshman combo of Kristen Nuss and Olivia Powers came out dominate in the third position, sweeping all four matches of the day.

For the No. 4 pair of Riley Young and Taylor Bradley picked up three match wins, falling to Georgia State’s No. 4 squad.

In the No. 5 slot, Lilly Kessler and Ashley Allmer picked up three sweeps and a split match between Alabama’s No. 3 squad.

The pair of Megan Davenport and Callan Molle in the sixth position posted three sweeps and a split between Spring Hill’s No. 4 team.

The No. 7 team of Emma Hiller and Jeni Clark, swept one match, while dropping the remaining three.

LSU’s next outing will be after the new year as they travel DeLand, FL for the Stetson Invitational on March 4-5, 2017.