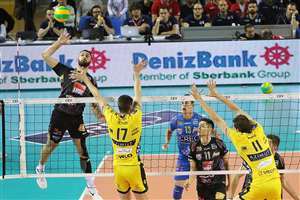 The Italian men’s Serie A1 finals battle has begun with Cucine Lube Civitanova and Diatec Trentino facing each other for... Current Photo via FIVB

The Italian men’s Serie A1 finals battle has begun with Cucine Lube Civitanova and Diatec Trentino facing each other for the title.

Lube was able to take a lead in each of the three sets and keep it, not looking back or faltering to their opponent. Lube’s captain Dragan Stankovic put down fundamentally strong blocks for the team throughout the match, ending the game with seven points.

Micah Christenson earned the MVP of the match putting out perfect plays for the team with six points on the night. In the third set alone, Osmany Juantorena recorded five points, with 11 overall in the match for Lube. Leading the scoring in the match was Tsvetan Sokolov with 14 points.

Coming up next is a the second leg of the best-of-five finals series between the two squads. Trentino will host the second match on May 4th.