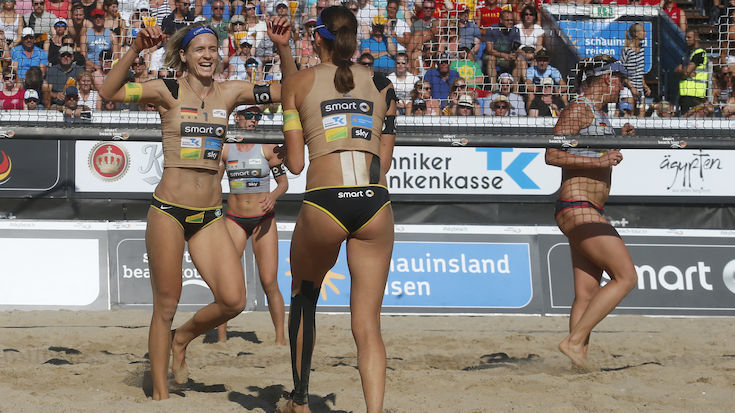 In front of 6000 spectators jammed around Center Court, the pairs  of Markus Böckermann / Lars Flüggen (men) and Laura Ludwig and Kira... Archive Photo via DVV

In front of 6000 spectators jammed around Center Court, the pairs  of Markus Böckermann / Lars Flüggen (men) and Laura Ludwig and Kira Walkenhorst  (women) walked away with titles over the weekend at the German Beach Volleyball Championships.

The conclusion of the year-long German “smart-tour,” Ludwig and Walkenhorst were first celebrated for their Olympic victory last month in Rio before beating Karla Borger and Britta Buthe for the women’s crown.

The other German Olympic pair, Melanie Gernet and Tatjana Zuatys, were surprisingly defeated in the third-place match, swept away in 2 sets.

A day later, Böckermann and Lars Flüggen were victorious to win the men’s title.

Ludwig and Walkenhorst were immediately off to Toronto for the FIVB World Tour Finals that are set to begin on Wednesday; they will be joined by Chantal Laboureur and Julia Sude in representing Germany in the women’s tournament.