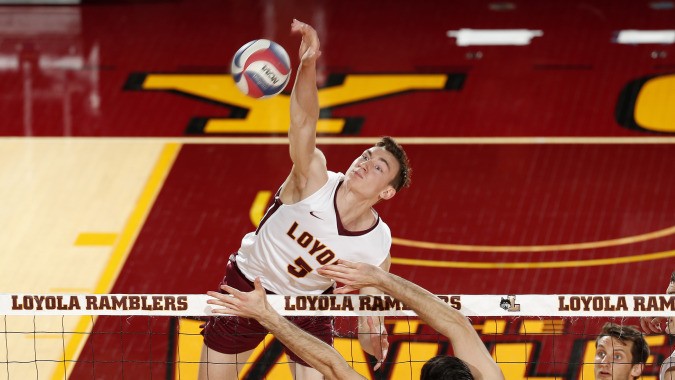 Fort Wayne, Indiana – In a fierce battle of MIVA opponents, #5 Loyola Chicago almost lost its 2-0 set lead but eventually slipped by #13 Fort Wayne in five. The victory keeps Loyola Chicago unbeaten and atop the race in the MIVA, while it further distances Fort Wayne from the top three in the standings yet also reaffirms their position as a top end MIVA team at the same time.

No one shined brighter than Collin Mahan in the match for the Ramblers, as he notched a team-high 18 kills on a .516 mark to go with four aces and four digs.

The combination of depth and a star in Mahan almost weren’t enough, as Fort Wayne’s Pelegrin Vargas was nearly unstoppable and recorded a match-best 24 kills on a .383 mark with seven digs. Unfortunately for the Mastodons, after Colton Stone (12 kills, .370, eight digs, three aces) and Tony Price (11 kills, .257, eight digs), the other Fort Wayne players notched just 12 kills on .075 clip.

Next up, Loyola Chicago takes on Ball State on the road on Saturday to finish their week. Fort Wayne meanwhile sticks around at home for another top 10 opponent as they play host to #8 Lewis on Saturday.

How It Happened
Back-to-back Mahan kills gave Loyola a 25-24 lead in the opening set, but Pelegrin Vargas answered with a kill that knotted the score at 25. An errant Fort Wayne serve, immediately followed by an attack error, allowed the Ramblers to complete a 27-25 victory.

Loyola stormed out of the gate to a 6-1 lead in set two and never looked back en route to a 25-19 win that gave it a 2-0 lead in the match. After the Mastodons trimmed the Ramblers’ lead to three, another Mahan kill, followed by a Paul Narup/Ricky Gevis block and a Will Tischler kill, extended the advantage to 15-9, and Fort Wayne never got closer than four points the rest of the way.

Mahan drilled a kill to draw Loyola even at 19 in the third set, but Fort Wayne reeled off three straight points to break open a 22-19 lead. The Ramblers fought their way back and got within a point on three occasions the remainder of the set, the last time coming on a Mastodon service error that made it 24-23, but the Ramblers misfired on a serve to provide Fort Wayne the final point in a 25-23 decision.

Fort Wayne sprinted out to a 7-2 lead in set four, but Loyola clawed back and closed within 9-8, thanks to a 6-2 run that was capped by a kill from Tischler. The Mastodons answered that spurt with three consecutive points to extend their lead to 12-8 and never allowed the Ramblers to get closer than three the rest of the set on their way to a 25-18 victory.

The decisive fifth set was back-and-forth until Loyola rattled off three unanswered points, capping that brief surge with consecutive blocks, to break open a 13-10 lead on the way to a 15-12 victory that ran its winning streak to eight matches overall.

Fort Wayne and Loyola traded points for most of the first set, and the Mastodons even had a set point opportunity. Both squads hit .308 for the set, and Vargas led the ‘Dons with seven first-set kills.

The Ramblers took an early lead in the second, jumping to a 6-1 lead. The ‘Dons did not get any closer than two points to Loyola in the set. The Ramblers hit .571 for the set.

The Mastodons trailed the majority of the first half of the third set, but after a timeout at 15-13 Loyola, the ‘Dons went on a 6-3 run to take the lead. This was capped off by a service ace from Kade Bontrager. Colton Stone had an ace of his own in a mini-run of three straight just a few points later. Vargas had seven more kills in the third. Kolbie Knorr had six digs to lead a 15-dig third set for the ‘Dons.

The ‘Dons jumped out to a 7-2 lead in the fourth before Loyola answered with a 5-1 run. The set was back-and-forth until the Mastodons went on a 7-2 run to open up a 24-16 lead. Tony Pricefinished up the set to even at two apiece with a kill. Price had four, and Vargas had five to charge the ‘Dons back. Fort Wayne had 17 digs in the fourth set alone.

Loyola led 8-6 at the switch in the fifth, but a kill from Vargas evened the score at 10 each. He hit .383 for the match. Loyola went on to snag five of the final seven points of the match.