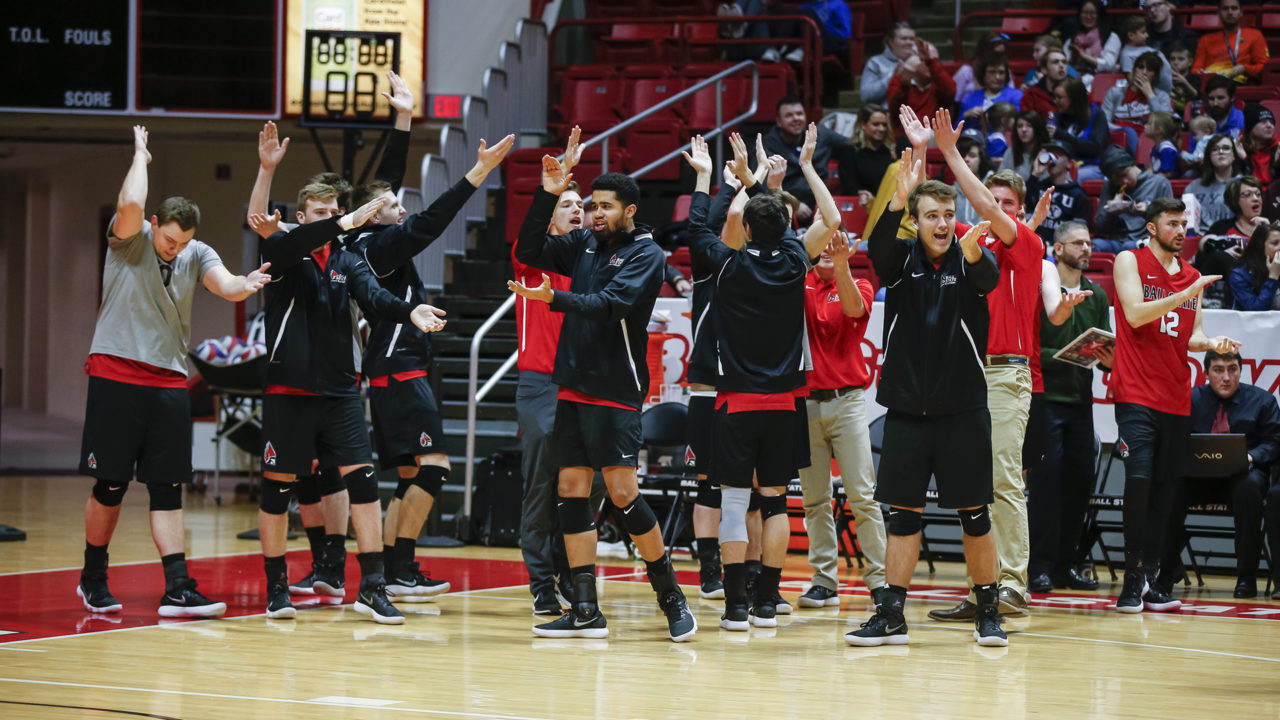 Ball State and McKendree scored upsets on Friday night, each holding their home court for victories. The Cardinals swept No. 8 Lewis, while the Bearcats held on to top No. 17 UC San Diego in four sets.  Current Photo via Ball State Athletics

Ball State and McKendree scored upsets on Friday night, each holding their home court for victories. The Cardinals swept No. 8 Lewis, while the Bearcats held on to top No. 17 UC San Diego in four sets.

Key Stats: Ball State snapped Lewis’ eight match win streak with a consistent offensive effort. The Cardinals hit nearly .200 in every set, while besting the Flyers in kills (41-27) and aces (5-4). Lewis notched 11 blocks, while allowing eight, but were plagued by 22 hitting errors and a .046 hitting effort.

Stat Leaders: Sophomore outside Blake Reardon and senior outside Mitch Weiler turned in double-digit kills for BSU with 14 and 12 respectively. Senior middle Matt Walsh chipped in eight kills on a team-leading .438 hitting effort, while also putting up a team-high four blocks alongside Weiler. Sophomore setter Jake Romano notched a 30-assist, 14-dig double-double and three of the team’s five aces in the win.

Redshirt freshman middle Tyler Mitchem and redshirt sophomore outside Ryan Coenen put down nine kills apiece to lead Lewis, while their nearest teammate managed just three putaways. Mitchem also accounted for eight blocks and was one of four Flyers with an ace to his credit.

It Was Over When: Ball State raced out to a 12-4 lead in Set 3 as Reardon downed four kills and Lewis made three errors. Four more Flyer miscues put the Cardinals up 19-11, but the set was far from over. Lewis chipped away cutting the margin to four at 21-17 including three blocks and eventually to two at 22-20 on an ace by Mitchem. Ball State recovered with three straight points to cut short the Flyer comeback bid. A hitting error coupled with a kill and a block by Weiler closed the door.

Key Stats: The Bearcats hit .300 or better in the three sets which they won, and committed 11 less errors in a four-set upset win over UC San Diego. McKendree outhit UCSD .315 to .223, while topping the Tritons 62-61 in kills and 11-7 in blocks. UCSD committed 28 hitting errors, to just 17 for McKendree.

Stat Leaders: Freshman outside Patrick Ross led a group of four McKendree hitters in double digits with 15 kills, while rounding out a double-double with a match-high 14 digs. Redshirt senior middle Brendan Schmidt (13), senior outside Jared Wilcox (12) and redshirt freshman middle Wyatt Dimke (10) followed. Schmidt hit at a team-best .632 clip with just one error, while Dimke put up a team-high six blocks and hit at a .500 clip. Wilcox added five blocks and nine digs.

Senior opposite Tanner Syftestad pounded down a match-high 23 kills and just missed a double-double with nine digs, but it was not enough for UCSD. Freshman outside Wyatt Harrison followed with 16 kills and eight digs, while redshirt sophomore outside Xander Jimenez turned in an 11-kill, 13 dig double-double. Redshirt senior middle Bryan Zhu chalked up a team-leading five blocks.

It Was Over When: Set 4 wasn’t decided until late after UCSD worked its way back from an 18-13 deficit to knot the score at 18 and 19. After calling timeout, the Tritons scored five straight, including three Bearcat errors. After another tie at 19, McKendree scored five of the next seven, including back-to-back kills by Schmidt to go up 24-21. A Pasquale Fiduccia kill wrapped up the match at 25-22 two points later.

Key Stats: Penn State won its third straight match overcoming a big blocking deficit (11.5-5.5) with a balanced and efficient offense and a standout serving effort. The Nittany Lions outdid the Pioneers in kills (53-38), efficiency (.370 to .213) and aces (9-3).

It Was Over When: Penn State went up by five at 11-6 midway through Set 4 with help from a pair of McLaren aces. Sacred Heart called timeout, but could get no closer than four the rest of the way. Mende notched five kills and a block, including the match-point putaway, as the Nittany Lions closed out the 25-18 win.

Key Stats: Saint Francis won every scoring category except aces to snap a three-match losing skid. The Red Flash outhit the Crimson .267 to .143 and outdid Harvard in kills (49-38) and blocks (12-9). Harvard served up four aces, while allowing just three.

It Was Over When: Saint Francis made just one hitting error in Set 4, hitting at a .462 clip, while forcing eight errors to limit Harvard to a .037 effort. After a tie at 7-all, the Red Flash pulled away with a 10-5 run, to go ahead 17-12. Two kills and a block by Buck and putaways by three other players lifted SFU to the five-point edge. Saint Francis held the Crimson at bay by at least four after that in the 25-19 win. A triple block by Roman Szwabinsky, Kegerreis and Thompson and a Buck kill put SFU on the hill at 24-18. A Braswell putaway closed out the match.

Key Stats: Loyola hit .250 or better in all five sets, including .300 plus in four stanza, en route to its eighth straight victory on Friday, edging Fort Wayne for a five-set road win. The Ramblers outhit the Mastodons .357 to .268 and edged Fort Wayne in kills (62-59) and blocks (8-5). Both teams served up nine aces in the match.

It Was Over When: The teams split the first 20 points in Set 5, with neither gaining more than a two-point lead. Loyola pulled away with five of the final seven points to snag the victory. A service error and back to back blocks by Jendryk and Garrett Zolg made it 13-10 and a kill by Gevis set up match point. Mahan notched his 18th kill to wrap up the win.

Key Stats: George Mason hit at a .377 clip to earn a sweep in its EIVA conference opener, including a .526 effort in Set 2 and another .400-plus effort in the opening stanza. The Patriots held NJIT to a .063 effort with an 8-4 lead in blocks. GMU also topped the Highlanders 35-26 in kills. Both teams managed five aces.

It Was Over When: After trailing 8-5, George Mason charged back with six of the next seven points to grab an 11-9 lead in Set 3. A kill and an ace by Greenslade and a block and kill by Langston Payne led the rally. NJIT called timeout and scored four of the next six to tie it up at 13, but the Patriots answered with a 6-0 run, including two Wagner putaways to go up 19-13. The Highlanders used a 3-1 run to cut the margin to four at 20-16, but it was all George Mason after that as the Patriots capped the win with a 5-0 run, including two blocks and a kill by Gatling.