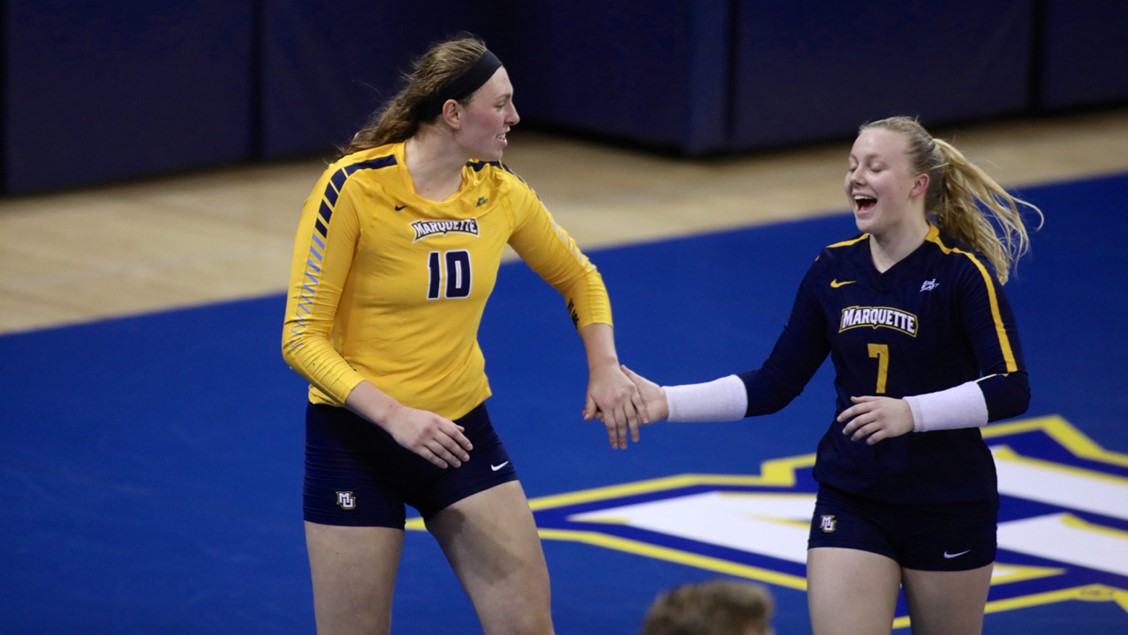 NEW YORK – The first BIG EAST volleyball players of the week for 2018 include two from preseason conference favorite, Marquette. St. John’s picked up the third award as each team competed in various tournaments across the country. Marquette’s Allie Barber was selected Offensive Player of the Week, teammate Martha Konovodoff was Defensive Player of the Week; while St. John’s rookie Rachele Rastelli earned Freshman honors.

Allie Barber, Marquette, Jr., OH (Cedarburg, Wis.)
Preseason Offensive Player of the Year, junior outside hitter Allie Barber was dominant at the Hampton Inn & Suites Baylor Invitational. Barber posted a .340 attacking percentage with 4.45 points and 4.20 kills per set to go along with four blocks over the weekend. The Golden Eagles went 2-1 overall, taking down LSU, who was receiving votes in the preseason poll and Texas State, but falling to host No. 16 Baylor, 3-1. Barber is currently second in the league in kills per set and logged 19 kills versus the Bears.

Allie Barber was tabbed as week one #BIGEASTvb Offensive Player of the Week! Way to go Allie! #muvb https://t.co/Oh1uW5OOky pic.twitter.com/e581QMMLSG

Martha Konovodoff, Marquette, So., DS (Sugar Grove, Ill.)
Sophomore defensive specialist Martha Konovodoff was named Best Defender at the Hampton Inn & Suites Baylor Invitational over the weekend. She accumulated 10 assists to go along with 5.90 digs per set, which is currently second-best in the BIG EAST to help the Golden Eagles secure a 2-1 start to the season. Konovodoff posted 22 digs against host No. 16 Baylor and Texas State.

Rachele Rastelli, St. John’s, Fr., RS (Parma, Italy)
Rookie right side hitter, Rachele Rastelli was impressive in her first weekend outing. Posting two double-doubles, she helped the Red Storm stay undefeated at 4-0 in its own tournament. Rastelli’s first double-double came against Eastern Michigan where she recorded 17 kills to go along with 11 digs. She then posted 23 kills and 14 digs versus Central Connecticut. She is currently the only underclassman ranking in the top 10 amongst BIG EAST players in points per game at 4.47.

Taryn Kloth, Creighton, Sr., OH (Sioux Falls, S.D.)
Kloth helped the No. 13 Bluejays (1-2) dismantle No. 5 Kentucky in their first match of the Trojan Invitational.  She was selected to the All-Tournament Team. She averaged 4.38 points and 4.09 kills on .244 hitting during the tournament, which featured No. 10 Southern California and Northern Iowa.

Symone Speech, Georgetown, Sr., MB (Oak Park, Ill.)
Named to the All-Tournament Team, Speech had double-digit kills in all four matches of the Hyatt Regency Invitational. The senior averaged 1.19 blocks per set with 3.19 kills per set and .271 hitting average to help the Hoyas secure a 2-2 split over the weekend.

Abby Thelen, Seton Hall, Sr., OH (Ft. Mitchell, Ky.)
The senior outside hitter was selected to the All-Tournament Team at the Blue & White Classic with a .268 hitting average, and she secured a team-best 4.18 kills per set and 4.41 points per set. The Pirates are now 2-1 overall on the season.

Regan Lough, Villanova, Jr., Libero (Riverside, Calif.)
Libero Regan Lough helped the Wildcats start the season undefeated at 3-0 as she led the league in digs per set (6.00), while adding five service aces.  Lough managed 34 digs in the match against the host Blue Hens.

Laura Grossman, Xavier, Sr., OH (San Juan, Puerto Rico)
Grossman stood out in the NIU Invitational by posting a .385 hitting average, along with 4.43 kills and 5.07 points per set against the host Huskies and Oklahoma, with the latter two leading the conference. She was also named to the All-Tournament Team for her performance. XU went 1-1.