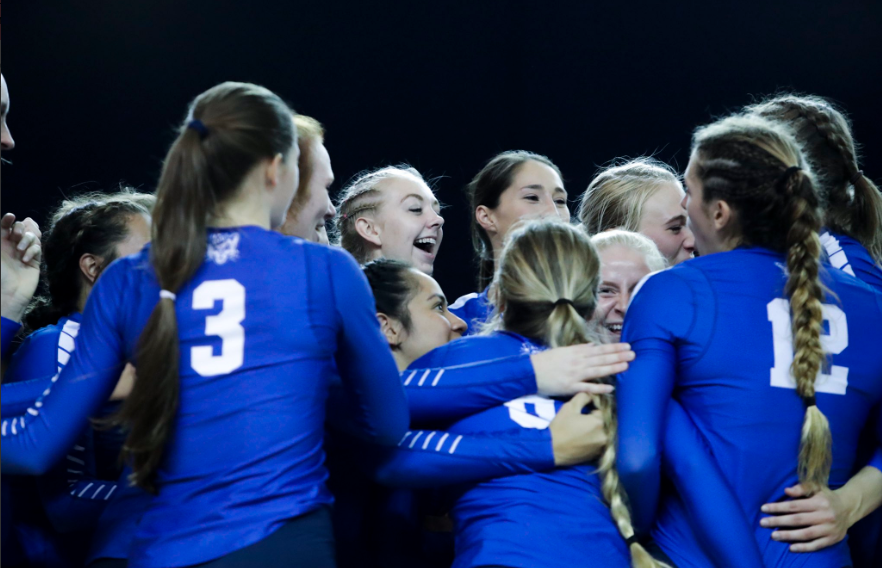 BYU took out #5 USC and Syracuse on the same day while #22 Marquette upended #5 USC at home in the night cap. Archive Photo via BYU Athletics

The Cougars backed up their opening top-five victory over USC with another triumph, this time against the Orange of Syracuse. That moves them to 7-0, while Syracuse has their first loss.

It was more of the Roni Jones-Perry show for BYU. One match after logging 26 kills, she added 16 on a .351 mark against Syracuse. Jones-Perry also added 5 digs, 4 blocks and an ace. Fellow pin McKenna Miller had quite the encore to her five ace match against USC too, as she notched 15 kills on a .429 clip.

Heather Gneiting (5 kills, .444, 4 blocks) was the only other Cougars player to reach five or more kills, while Kennedy Eschenberg (4 kills, .308, 7 blocks) had the third most points. It was brief, but the team also saw the return to action of Taylen Ballard, who had a pair of errors on two swings. Setter Lyndie Haddock-Eppich was at the forefront of the attack.

For BYU, they are one win from a perfect weekend, although it comes at #22 Marquette tomorrow. In Syracuse’s case, they’ll take on #5 USC before meeting former Big East foe Marquette on Sunday.

The tough day for the Trojans continued, as they fell short to top-ranked BYU then were upended on the road by #22 Marquette. It was quite the way to finish off the first night for the host-school too, as the Golden Eagles netted their best win of the early 2018 season.

Marquette jumped out to a 2-1 lead with their attack and strong serve, that again tested some inconsistent passing for USC. After the Trojans struggled in defense and gave up 26 kills to BYU’s Roni Jones-Perry in just three sets, they had their problems again as Allie Barber (29 kills, .473, 3 blocks) blew up with a star performance to appease the home crowd.

USC battled back in an incredible fourth though, with another efficient match from the WCC transfers in Emily Baptista (14 kills, .364) and Jasmine Gross (7 kills, .400, 10 blocks). Khalia Lanier (17 kills, 11 digs) and Brooke Botkin (17 kills, 6 digs, 4 blocks) combined for solid totals, but Marquette did a strong job defensively in making them earn it as they hit a combined .155 on 110 attempts and had five reception errors – four from Botkin.

Come the fifth, those defensive struggles hurt USC again as Marquette hit .500. USC was highly efficient as well though, and tied the game at 10-10. Haak wound up with back-to-back kills from there and also served on the last two points when Werch scored and Lanier had an attack error.

Neither loss today for USC is a head-scratcher, but combined with their loss to UCF last week gives them three in four matches. For Marquette, it’s proof that they can play with the best and confirmation that with all starters back from 2017 that they can contend for a Big East crown.

To round out this event, USC will face Syracuse tomorrow looking to recover. Marquette will host #1 BYU, looking for a monumental victory with the winner of that taking the tournament crown.