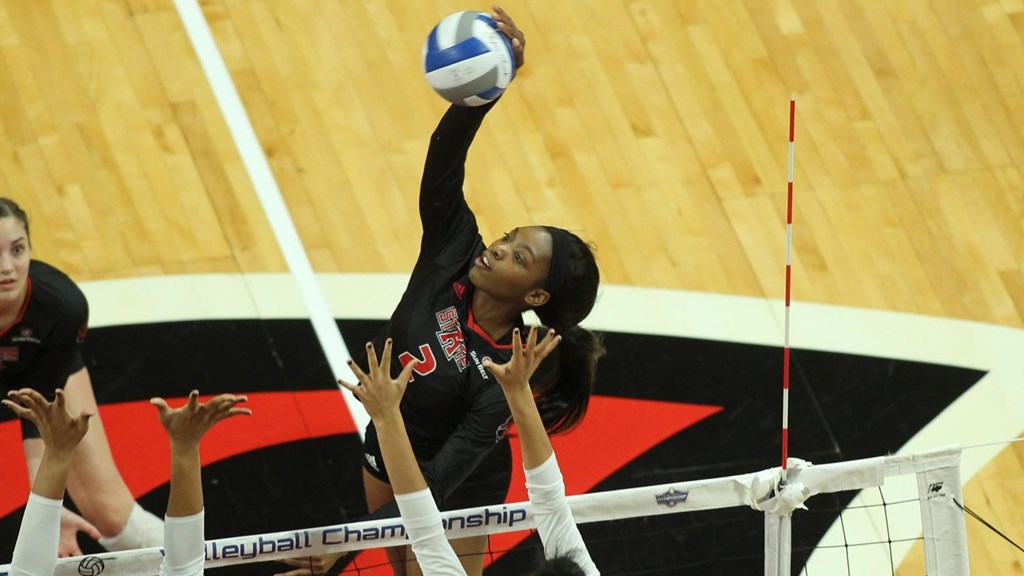 Carlisa May, Arkansas State (Sr., OH, Lee’s Summit, Mo.)
Arkansas State senior outside hitter Carlisa May helped the Red Wolves remain unbeaten at home this season with a sweep of Louisiana and ULM on back-to-back nights. May led the way in both matches, recording her eighth double-double and third straight with 17 kills and 10 digs against the Ragin’ Cajuns. She finished with 5.67 kills per set in the match and had a .289 hitting percentage. Against the Warhawks, May posted 14 kills on a .231 hitting percentage, while also adding a block and six digs.

Congratulations to Carlisa May who has been named the Sun Belt Conference Offensive Played of the Week. #WolvesUp pic.twitter.com/atMraiXBFJ

Veronica Marin, Little Rock (Sr., MB, Tulcea, Romania)
Little Rock senior middle blocker Veronica Marin once again paced the defensive effort over the weekend, leading the Trojans to a pair of 3-0 sweeps of ULM and Louisiana. Marin finished with 13 total blocks, finishing with five against ULM and eight against Louisiana, in addition to her 17 kills and .500 hitting percentage. She continues to lead NCAA Division I in total blocks (137) and ranks second nationally in blocks per set (1.69).

Stop us if you're heard this one before.

Veronica Marin is named the #SunBeltVB Defensive Player of the Week for the fourth time this season as she continues to rank 1️⃣st nationally in total blocks.#LittleRocksTeam

Amara Anderson, Troy (Fr., S, Alpharetta, Ga.)
Troy freshman setter Amara Anderson led the Trojans to another perfect weekend on the road in Sun Belt play. Anderson recorded 55 assists at Georgia Southern and 49 assists at Georgia State for an average of 11.56 per set. Her 55 against the Eagles tied for the eighth-most in a single match in the conference this season. She now leads the Sun Belt at 10.82 assists per set and leads in total assists by over 40. Anderson also added 31 total digs on the weekend, extending her impressive streak of consecutive double-doubles to seven-straight matches.

Emily DeWalt, Texas State (Fr., S, Helotes, Texas)
Texas freshman setter Emily DeWalt led the Bobcats to wins over Coastal Carolina and Appalachian State. DeWalt racked up 11.00 assists, 3.86 digs, 1.43 kills and 0.86 blocks per set. She also had just one attack error to finish with a .600 hitting percentage. DeWalt leads the Sun Belt in double-doubles and assists. She is also ninth in digs and is the only setter to rank in the top 10 of that category.

Emily DeWalt of @TexasStateVball named Freshman of the Week by the @SunBelt as the Bobcats continue to roll through the season, now up to #28 in RPI! pic.twitter.com/Bw2KOOKgr7