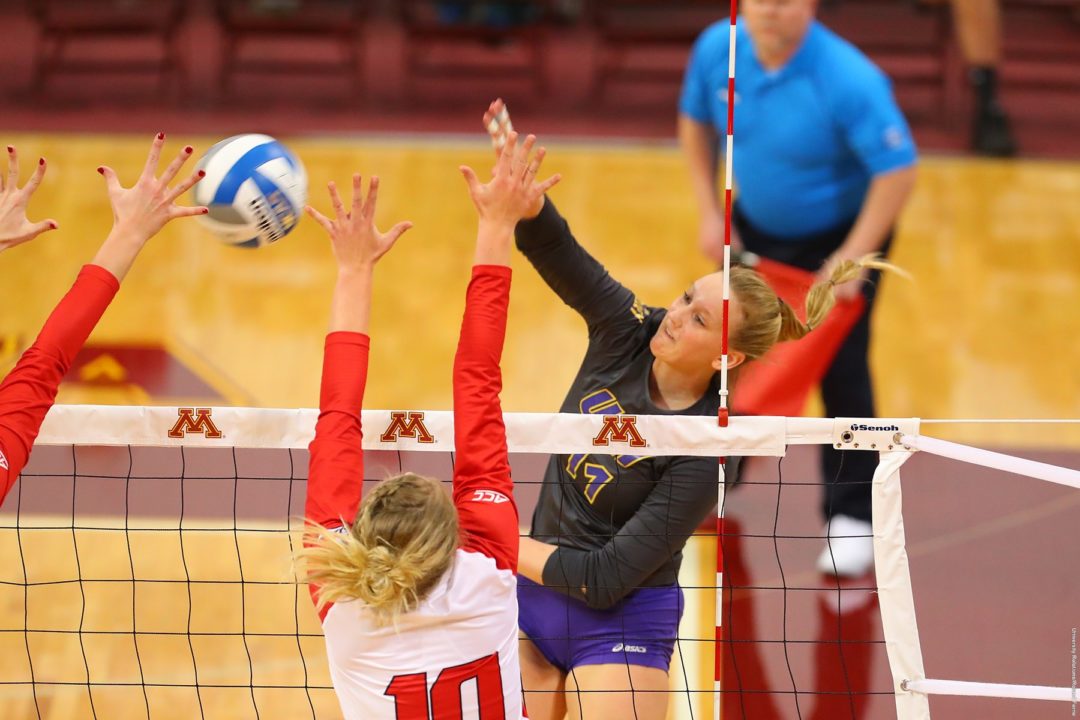 Karlie Taylor, Jr., OH, UNI
UNI’s Karlie Taylor recorded 61 kills and 42 digs in the Panthers three victories over Evansville, Southern Illinois, and Missouri State last week. During the Monday match against Evansville Taylor recorded 20 kills and an attack percentage of .447. Defensively the junior outside hitter added eight digs and a block assist. Friday, at Southern Illinois, Taylor finished with 25 kills, one assist, a .442 attack percentage and 15 digs. Taylor finished the week against Missouri State with 16 kills and a  service ace to go along with her 19 digs, one solo block and four block assists. Taylor averaged 5.08 kills/set, 3.50 digs per/set and 5.46 points/set during the week.

Recording 61 kills and 42 digs in @UNIVolleyball's three wins last week, Karlie Taylor is the #MVCVB Player of the Week! pic.twitter.com/cXQzG9tPW0

Courtney Pence, Sr., L, Illinois State
Pence helped pace a strong defensive effort by the Redbirds, as Illinois State held its two opponents for a combined .150 hitting percentage. She collected a match-high 19 and 21 digs against Loyola and Valparaiso as Illinois State took sole possession of second place in the MVC standings. Pence averaged 5.71 digs per set in just seven sets played this weekend to improve her season digs per set average to 5.68, which ranks among the top-15 in the nation. Pence also helped set up an offense that hit .254 against the Crusaders on Friday night, contributing a season-high seven assists. Against Loyola, Pence continued to make an impact, serving up a season-high five aces, to contribute a season-high five points in the match as a libero.

Helping pace the @RedbirdVB defense last week with 5.71 digs per set to hold opponents to a combined .150 hitting percentage, Courtney Pence is the #MVCVB Defensive Player of the Week! pic.twitter.com/4Ub7q4Cbwc

Hannah Thompson, Fr., OH, Bradley
Thompson averaged 2.86 kills per set and hit .262 in a pair of home wins.  The outside hitter also averaged a team-best 5.71 digs per set, 0.29 aces and 0.57 blocks per set as she helped Bradley move up into third in The Valley standings.  Thompson opened the week with her team-best 10th double-double of the year, collecting 12 kills, two aces and 18 digs in a four-set victory against Loyola.  She capped the week with eight kills, match-high 22 digs and season-best four blocks in a sweep of Valparaiso.  Thompson pushed her season dig total into sixth among Bradley freshman marks and now owns the 12th-best kill total by a Bradley frosh.

For the 3rd time this season, Hannah Thompson of @BRADLEYvolley has been named the @MVCsports Freshman of the Week!