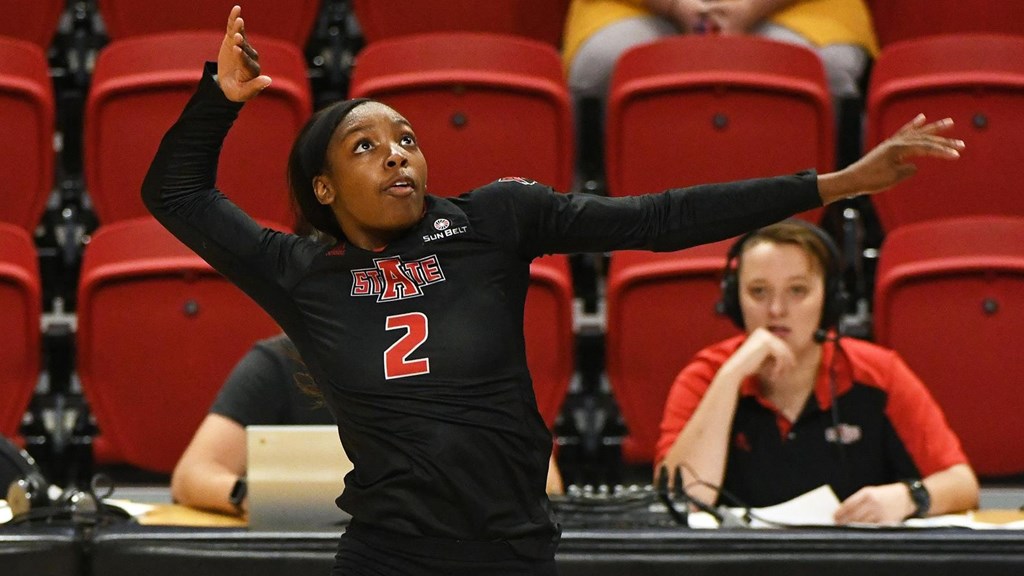 Carlisa May, Arkansas State (Sr., OH, Lee’s Summit, Mo.)
Arkansas State senior outside hitter Carlisa May was fantastic in the opening weekend of Sun Belt play with 46 kills for a 5.75 per set average on a .299 hitting percentage. May had 17 kills in the sweep of Troy before a career-best 29 kills on a .310 hitting percentage in the Red Wolves’ comeback win over South Alabama.

Congrats to Carlisa May for winning the #SunBeltVB Offensive Player of the Week Award. It's the first of the season for May and her 15th career weekly award. #WolvesUp

Veronica Marin, Little Rock (Sr., MB, Tulcea, Romania)
Little Rock senior middle blocker Veronica Marin recorded 23 total blocks in wins over South Alabama and Troy, including 11 solo blocks. Marin posted 13 blocks (five solo) against the Jaguars, tying for the second-most in a match in program history. She added 10 blocks (six solo) in the five-set win over Troy. Marin also recorded 24 kills and a .316 hitting percentage with a pair of double-doubles over the weekend.

After registering 2️⃣3️⃣ blocks in the Trojans' two wins over the weekend, Veronica Marin picks up her second @SunBelt Defensive Player of the Week honor of the year.

SETTER & FRESHMAN OF THE WEEK

Emily DeWalt, Texas State (Fr., S, Helotes, Texas)
Texas State freshman setter Emily DeWalt had double-doubles in both matches and led the Sun Belt with 13.00 assists/set (91 total) to power the Bobcats to a pair of road wins. DeWalt steered Texas State to a cumulative .347 attack percentage, which was exactly .100 points higher than the second-best team from the conference last week. She had 38 assists and 11 digs in a three-set sweep over ULM before dishing out 53 assists and 14 digs in a four-set victory over Louisiana. Both of her assist totals were the second-highest marks registered for three- and four-set matches, respectively, by a Sun Belt player this season.

Emily DeWalt has now been named the #SunBeltVB Setter and Freshman of the Week three times this season! #TXSThttps://t.co/RjdMEfuYUI