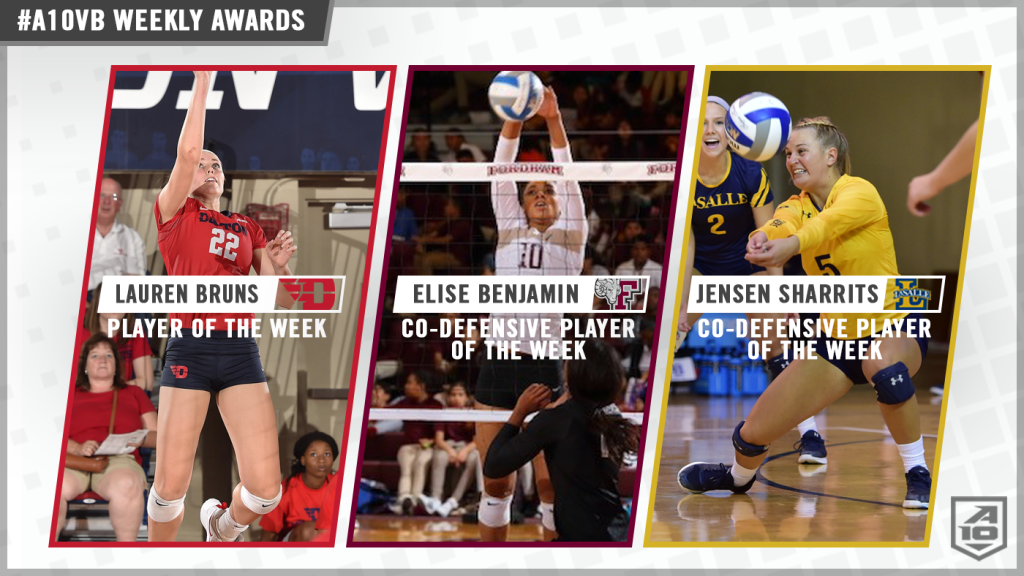 NEWPORT NEWS, Va.—Dayton senior Lauren Bruns was named the Atlantic 10 Conference Volleyball Player of the Week, while Fordham junior Elise Benjamin and La Salle senior Jensen Sharrits were named Co-Defensive Players of the Week. George Mason freshman Peyton Ehmke was selected as the league’s Rookie of the Week. All awards were for matches played Sept. 17-23.

Bruns helped lead the Flyers to a 2-0 opening weekend in league play with wins over George Mason and George Washington. The outside hitter from Versailes, Ohio, tallied 16 kills in a 3-1 win over the Patriots on Friday. She followed with a match-high 24 kills to go with six digs and four blocks against the Colonials.  For the week, Bruns averaged 5.00 kills per set and hit .263.

Benjamin anchored a stout Fordham defense against Rhode Island in a five-set win. The middle blocker from Desoto, Texas, recorded 11 blocks, falling just one block short of the program’s five-set record and averaging 2.20 blocks per set.

Sharrits averaged 6.14 digs per set for the week as La Salle earned its first sweep of an Atlantic 10 team in over a decade with a 3-0 win over Davidson. The libero from Concord Township, Ohio, registered 23 digs against the Wildcats and also tallied 20 digs against VCU.

Jensen Sharrits was named Atlantic 10 Volleyball Co-Defensive Player of the Week today for the second time this season! 🔭🏐👏 #GoExplorers

Ehmke, a middle blocker from San Clemente, Calif., averaged 1.88 blocks and 2.44 kills per set over the weekend. She recorded eight blocks and five kills against Dayton, followed by a career-high 17 kills and career-high nine blocks in a five-set win over Saint Louis.