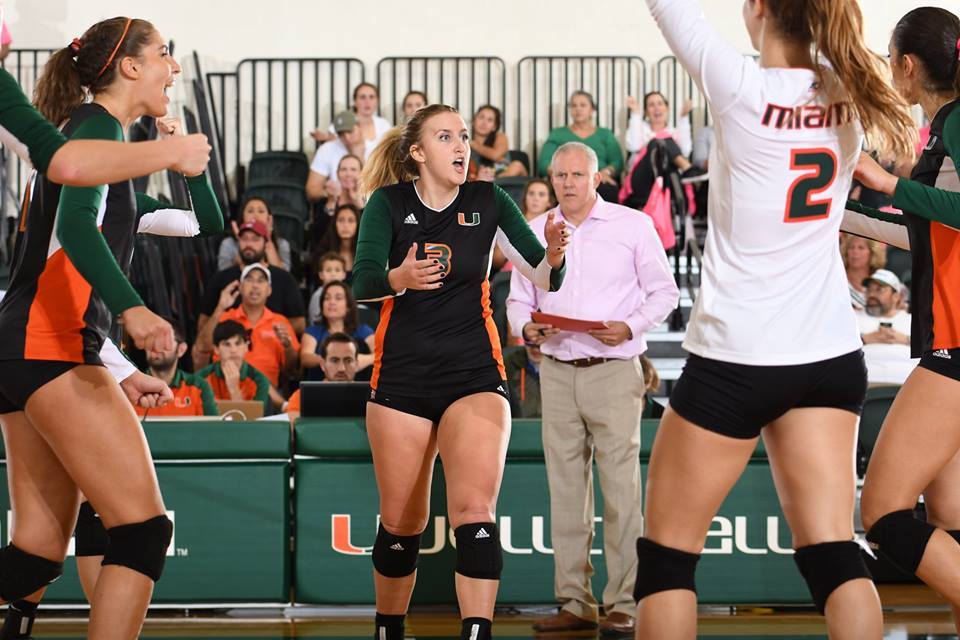 The Miami Hurricanes (9-13, 3-7 ACC) cruised past the Virginia Cavaliers (4-18, 1-9 ACC) on Saturday in three sets to earn their third conference win of the season. Current Photo via Miami Volleyball/Facebook

The Miami Hurricanes (9-13, 3-7 ACC) cruised past the Virginia Cavaliers (4-18, 1-9 ACC) on Saturday in three sets to earn their third conference win of the season.

The first set two sets stayed close, with the teams tying at least six times before Miami edged Virginia out in each. Miami was up 9-4 in the third set when Virginia went on an 8-3 run to tie at 12 and then top Miami at 15-14, but Miami pulled away to clinch the set and match.

On the other side of the net, Haley Kole and Jasmine Burton had nine kills each for the Cavaliers, with Kole adding a team-high seven digs and Burton three blocks. Jennifer Wineholt notched 29 assists.

Miami will go on the road to face Notre Dame on Friday and Louisville on Sunday. Virginia will travel to Georgia Tech on Friday and Clemson on Saturday.

CHARLOTTESVILLE, Va. — The University of Miami volleyball team closed out the weekend with a three-set sweep of Virginia to earn its third ACC win of the season.

The Hurricanes came out of the break, taking an early 10-5 lead in the third set. Miami would continue to build off that momentum to close out the third set, 25-18, securing the match victory.

Junior Olga Strantzali paced Miami with a team-high 14 kills and nine digs during the match, while Anna Haak finished with 12 kills, seven digs and a block.

Following this week’s matches, the Canes will continue their road swing with a trip to Notre Dame for a 7 p.m. match on Oct. 28. Miami will also play at Louisville at 2 p.m., on Oct. 30.

“For how well we played and how hard we fought last night, it wasn’t there for us tonight,” head coach Dennis Hohenshelt said. “We were not very good tonight. We were hoping that Miami would go away instead of making plays to beat them. We have to be the aggressors instead of being casual in these games.”

After Virginia fell behind 6-2 early in the first set, the Cavaliers scored five of the next six points to tie the match at seven a piece. Miami responded with a 3-0 run before Virginia used a 4-1 stretch to tie the match at 11. The set stayed close until Miami used a 5-2 run to take a 21-16 lead. Virginia attempted to mount a comeback, scoring two of the next three points with kills by Young and Sebastian, before Miami scored three of the final four points to win the set 25-19.

Virginia scored the first point of the second set on a kill by Kole and the set stayed close early with four tie scores. The teams traded points with neither team leading by more than one point until Virginia went up 9-6. Virginia’s momentum continued as the Cavaliers used a 4-1 run to go up 11-7. Virginia was in control 20-16 when Miami crept back in to tie the set at 22. The teams saw two more ties before the Hurricanes were able to score two-straight to win 26-24.

“There are still 10 games left so there is a lot of the season left,” Hohenshelt said. “We have a choice to roll over or play harder and practice harder. We have to be in attack mode right now.”

Virginia is on the road next weekend as it travels to take on Georgia Tech on Friday, Oct. 28 and Clemson on Saturday, Oct. 29.