Michigan Has Yet to Drop a Set this Season 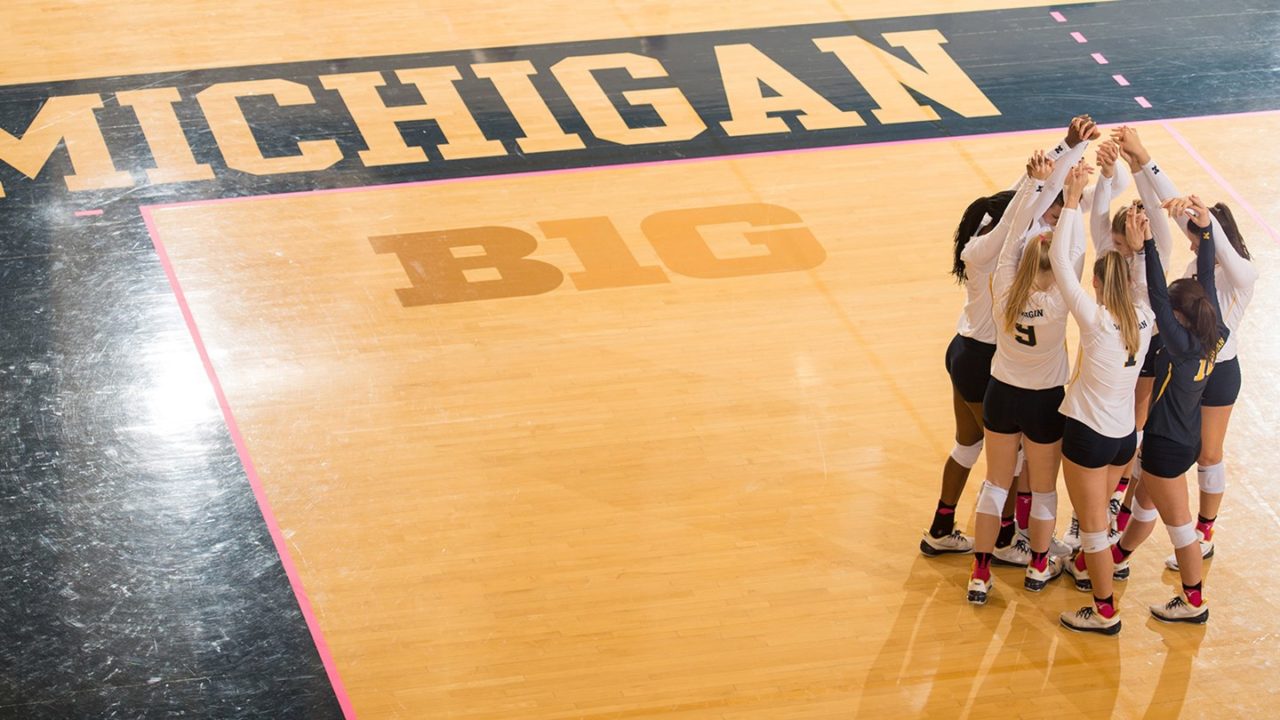 ANN ARBOR, Mich.–The Michigan Wolverines pulled off the sweep in three sets over the Valparaiso Crusaders in a non-conference match-up on Tuesday evening in Ann Arbor, Michigan. The Wolverines remain undefeated and have yet to drop a set in the 2018 season.

Michigan was dominant the entire match. A season-high of 16 athletes played in the match and freshman, Lizzie Sadilek, made her collegiate debut. Michigan hit a season-best .363 in the match while holding their opponents to .114.

Carly Skjodt led the Wolverines to the win with 14 kills on 21 swings with two errors for a .571 hitting clip, while Paige Jones added in another nine kills on 16 swings with two errors to end the night with a .438 hitting performance. Cori Crocker made her presence known with eight kills and one error for a .778 clip along with a dig while Sydney Wetterstrom also took the court with eight kills.

For the Crusaders, Jaclyn Bulmahnput away nine kills on a .273 clip and Ally Cummings added seven more while Brittany Anderson dished out 26 assists and five digs.

The Shockers will host their next match on Friday, September 7 at 1 P.M. CT.

ANN ARBOR, Mich. — Backed by a season-best .363 team hitting percentage, the University of Michigan volleyball team earned its sixth straight win via a sweep with a 3-0 (25-19, 25-13, 25-20) victory over the Valparaiso Crusaders on Tuesday night (Sept. 4) inside Cliff Keen Arena.

The six-sweep start to Michigan’s season is a program-best during the rally-scoring era. The Wolverines have not begun a season with six straight sweeps since 1984.

Michigan came back from a one-point deficit early in the first set to rally for six straight points and a 9-4 lead on a serving run from senior Maddy Abbott. The momentum was short-lived, as the Crusaders answered with a 7-3 run and cut Michigan’s lead back to one, 13-12. The Wolverines responded quickly with a big kill from Wetterstrom and used a balanced offense to take the first set, 25-19.

The Wolverines dominated the second set as they took a lead at 3-2 on a kill from Crocker and never looked back. A .333 team hitting percentage along with four kills apiece from Skjodt and Wetterstrom allowed the Wolverines to maintain a strong lead and win set two by a 25-13 score.

The Maize and Blue immediately gained an edge in set three on a cross-court kill from Jones and used a .467 attack average to go up by as many as six, 20-14, on a big kill from freshman Lizzie Sadilek. Despite the momentum, Valparaiso gained its composure and went on a 7-2 run — including four straight points — to cut Michigan’s lead to three, 23-20, before the Wolverines took their first timeout of the night. Following the stoppage in play, Michigan finished things off quickly for a 25-20 third-set victory.

Michigan saw a season-high 16 student-athletes appear in the match, including Sadilek, who made her career debut.

The Wolverines (6-0) will return to action on Friday (Sept. 7) as they kick off the Michigan Challenge. Michigan will first play host to Oakland (1 p.m.) before entertaining LSU (7 p.m.) in an evening matchup. The tournament will wrap on Saturday (Sept. 8) with a lone contest against Colorado State at 7 p.m. All three matches will be played inside Cliff Keen Arena.

The Valparaiso University volleyball team faced its strongest test of the 2018 season on Tuesday evening in Ann Arbor, Mich., battling gamely but falling in straight sets (25-19, 25-13, 25-20) to host Michigan.

Valpo (6-2) heads out west to Colorado for the Amy Svoboda Memorial Classic, hosted by Air Force. The three-match tournament gets underway for Valpo against the hosts on Friday afternoon at 3 p.m. CT.