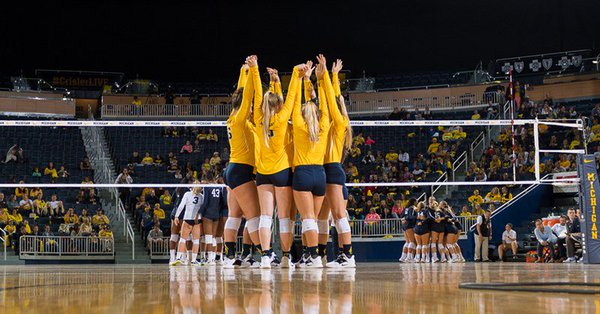 The Michigan volleyball team (15-2, 4-2 B1G) will kick off this weekend a four-match road swing with contests at Ohio State and Maryland.  Current Photo via Michigan Athletics

ANN ARBOR, Mich. — The No. 14-ranked University of Michigan volleyball team (15-2, 4-2 B1G) will kick off this weekend a four-match road swing with contests at Ohio State and Maryland. The Wolverines will first visit the Buckeyes in Columbus, Ohio, on Friday (Oct. 12) before making the trek to College Park, Maryland, for a Sunday match (Oct. 14) against the Terrapins. Both contests will be streamed live on BTN Plus.

Michigan sits in a tie for third place in the Big Ten with a 4-2 record through the first three weeks of conference play. Both of the Wolverines’ conference losses came at the hands of teams ranked in the top 10 in the AVCA at the time, including then-No. 3 Nebraska (Sept. 21) and then-No. 9 Penn State (Sept. 30). Michigan is on a two-match win streak in Big Ten action.

Thanks to wins over Purdue and Indiana last weekend, the Wolverines jumped up to No. 7 in the latest RPI ranking, which was released by the NCAA on Monday (Oct. 8). Michigan is ranked second-highest of the Big Ten schools, behind Illinois (No. 3), and joins Wisconsin (No. 8), Nebraska (No. 9) and Minnesota (No. 10), as one of five Big Ten teams in the top 10. The NCAA announced the first edition of the RPI Oct. 1, with the Wolverines coming in at No. 11.

With a 399-246 overall record through the last 19-and-a-half seasons at the helm of the Michigan program, head coach Mark Rosen and associate head coach Leisa Rosen are one victory away from clinching their 400th win with the Maize and Blue. The duo’s 300th Michigan victory came just five seasons ago in 2013, with a win over Iowa (Oct. 12).

How Michigan Stacks Up

The Wolverines rank No. 10 in the nation in kills per set (14.50) and No. 9 in assists per set (13.66). Michigan also ranks ninth in the country and third in the Big Ten Conference with a .147 opponent hitting percentage. Individually, senior libero Jenna Lerg leads the conference and ranks 18th in the nation with 5.38 digs per set, while junior setter MacKenzi Welsh ranks 10th in the country and first in the Big Ten with 11.54 assists per set.

Ohio State Buckeyes
All-time series against: U-M trails, 53-24
Ohio State will enter the week with an 11-7 record as well as a 2-4 record in Big Ten action. The Buckeyes’ lone conference wins have come over Rutgers and highly-ranked Penn State. Despite a slow start to the conference schedule, sophomore middle blocker Lauren Witte leads the Buckeyes and ranks eighth in the Big Ten Conference with a .369 hitting percentage.

Maryland Terrapins
All-time series against: U-M leads, 7-0
Maryland boasts a 12-6 record and a 3-3 Big Ten record coming into the week, but will host Michigan State on Friday (Oct. 12) before entertaining the Wolverines on Sunday (Oct. 14). Of the Terps’ three conference wins, two have come over Rutgers and one came against Ohio State. Redshirt sophomore Katie Myers leads the Big Ten and ranks 10th in the nation with .53 aces per set, while freshman libero Allegra Rivas ranks fourth in the conference with an impressive 4.58 digs per set.

Michigan and the AVCA Rankings

The Wolverines jumped three spots in the AVCA Top-25 Coaches Poll this week and are ranked No. 13 with 769 votes following wins over then-No. 14 Purdue and Indiana last weekend. Michigan began the year as the second team outside of the top-25 preseason poll with 153 votes, but entered the poll at No. 23 following a 2-0 showing at the War Eagle Invitational to kick off the season.

After guiding Michigan to a sweep of No. 14-ranked Purdue and a five-set win over Indiana, senior outside hitter Carly Skjodt was named the Big Ten Conference Player of the Week for the first time this season. Skjodt led the Wolverines with 40 kills — including a career-high 29 against Indiana (Oct. 6) — at a .364 kill percentage for the weekend. The senior also posted 11 kills against Purdue (Oct. 5), which helped contribute to a season-best .435 team hitting percentage, and she finished the week with 5.00 kills per set to go with 2.12 digs per set.

Lerg earned her second Big Ten Conference Defensive Player of the Week award after helping guide Michigan to victories over No. 14 Purdue and Indiana. Lerg led Michigan in digs for the week, averaging 5.21 per set, and recorded her fifth 20-dig effort of the season with 25 digs in a five-set win over Indiana.

Welsh earned her second Big Ten weekly honor as she was named the conference’s Co-Setter of the Week following wins over No. 14-ranked Purdue and Indiana. Welsh guided Michigan to a season-best .435 team hitting percentage over Purdue (Oct. 5) and finished the week with a .500 kill percentage while posting 12.38 assists per set. She also tied her season-high with 60 assists and earned her sixth double-double of the season with 16 digs in Saturday’s win over Indiana (Oct. 6).

Maize and Blue on the Road

The Wolverines are 3-1 when playing on the road this season, with their lone road loss coming at then-No. 3 Nebraska to kick off Big Ten Conference play (Sept. 21). Michigan’s three road victories came at Auburn (Aug. 25), Notre Dame (Sept. 16), and Iowa (Sept. 23), with an additional neutral-site victory coming against High Point (Aug. 25) in Auburn, Alabama.