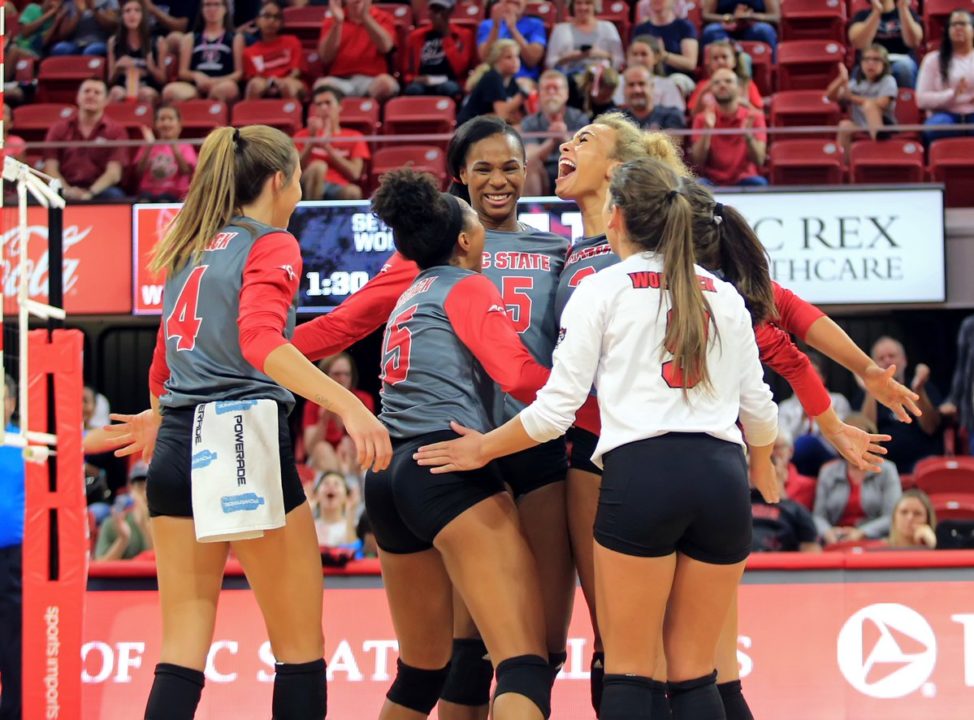 After a four-match road swing, the NC State volleyball team will return to Reynolds Coliseum this weekend as the Wolfpack hosts Virginia and sixth-ranked Pittsburgh in a pair of televised matches.  Current Photo via NC State Athletics

RALEIGH, N.C. – After a four-match road swing, the NC State volleyball team will return to Reynolds Coliseum this weekend as the Wolfpack hosts Virginia and sixth-ranked Pittsburgh in a pair of televised matches.

Friday’s match against the Cavaliers is slated for 6 p.m. and will be broadcast nationally on ESPNU with Sam Ravech handling play-by-play and Lizze Stemke serving as the color analyst.

For the second consecutive Sunday, NC State’s match will air live on Regional Sports Networks (RSN) with first serve set for 1 p.m. Lyndsay Rowley and Anna Connelly will have the call and a list of tv affiliates in your area can be found HERE.

The Wolfpack heads into the weekend with an 8-8 overall record and a 2-4 mark in ACC play, while the Cavs are 5-11 and 0-5 in conference action. Pittsburgh, the defending ACC Co-Champion and unanimous favorite in the preseason poll, is one of two unbeaten teams in the nation with an 18-0 overall record and a perfect 6-0 mark in league contests.

– Postmatch autographs with sophomores and freshmen

In its last outing, NC State came up short at Miami, 3-1. After dropping the first two sets, the Wolfpack put together a dominant third set but was unable to carry that momentum over to the fourth set.

NC State head coach Linda Hampton-Keith heads into the weekend just one win shy of reaching 50 for her career.

Starred on the Calendar

After senior All-American Kylie Pickrell took a trip to Brazil in the summer through Athletes In Action (AIA) along with Pittsburgh’s Angela Seman and Stephanie Williams, Sunday’s match against the Panthers has been starred on the calendar for each of the student-athletes.

Pickrell said that she enjoyed playing with them and that it would be exciting to see them on the other side of the net in the fall. The ACC trio helped the USA Team claim a bronze medal at the FISU America Games.

Lucky Second Set
NC State is a perfect 7-0 on the year when winning the second set. The Wolfpack has outscored opponents, 369-354, in the frame.

Wolfpack Among the ACC Rankings
Four Wolfpack players rank among the top 10 of the ACC individual rankings, as Lauryn Terry is eighth in the league with a .353 attacking percentage. Pickrell has handed out the third-most assists per set in the conference with 10.57, which also ranks among the top 50 in the NCAA.

Makenzie Kuchmaner has collected 4.60 digs per set to rank second in the ACC, while sophomore Melissa Evans is eighth in the conference with 3.56 kills per set.

NC State won the lone meeting against Virginia last season, 3-0, inside Reynolds Coliseum nearly a full calendar year ago on October 13. The Pack’s win in that match earned the best start to ACC play in program history, as the squad moved to 7-0 at that point in the season.

Julia Brown led the Wolfpack in that contest with a match-high 12 kills to go along with a .379 attacking percentage. NC State tallied a team attacking percentage of .362 against the Cavs, which was the third highest of the season and second best in an ACC match.

In their second season under head coach Aaron Smith, the Virginia Cavaliers have been competing hard in each match but have only managed a 5-11 overall mark with a 1-5 clip in conference action.

The Cavs split their most recent weekend of play, defeating Boston College at home, 3-2, before dropping a 3-0 decision to Syracuse. NC State has won the last two meetings and seven of the last 10.

Sarah Billiard leads the team offensively with 3.90 kills per set for a total of 242 kills on the year. Virginia uses two setters in their 6-2 system, as Megan Wilson has handed out 8.44 assists per set and Jennifer Wineholt has tallied 5.18. At libero, Kelsey Miller has logged 3.85 digs per set.

The Cavaliers have tallied a .203 team attacking percentage and opponents have charted a .224 clip.

NC State’s best win a season ago was its victory against the Pitt Panthers on their home court. The Wolfpack traveled to Pennsylvania to face the previously-unbeaten in conference play Panthers and handed the squad their first and one of just two ACC losses on the year.

The Pack moved into first place in the conference standings following the 3-1 win last year inside Fitzgerald Field House and it was the only meeting between the teams last season.

The Pitt Panthers head to Raleigh as one of two unbeaten teams in the nation, joining No. 1 BYU. Pitt is ranked sixth in the American Volleyball Coaches Association (AVCA) Poll this week and is also sixth in the NCAA RPI.

Pitt swept North Dakota in its most recent outing on Tuesday evening and also defeated Florida State in straight sets in its last ACC match. The Panthers have dropped just two sets in conference play all season with six wins.

Sunday’s trip will be the first for Pitt to renovated Reynolds Coliseum, as the Panthers last traveled to Raleigh in 2015 when the facility was under renovation and the match was held in Carmichael Gym.

NC State has played well against Pitt in its only two meetings under head coach Linda Hampton-Keith, as the Wolfpack won last season and had match point against the Panthers in 2016 before the squad rallied for the victory.

Kayla Lund leads the Panthers offensive attack with 254 kills, averaging 4.10 kills per set, the third most in the ACC. Kamalani Akeo and Kylee Levers have split time at the setter position, with the former passing out 6.94 assists per set and the latter 5.13. Libero Angela Seman paces the back row with 3.83 digs per set.