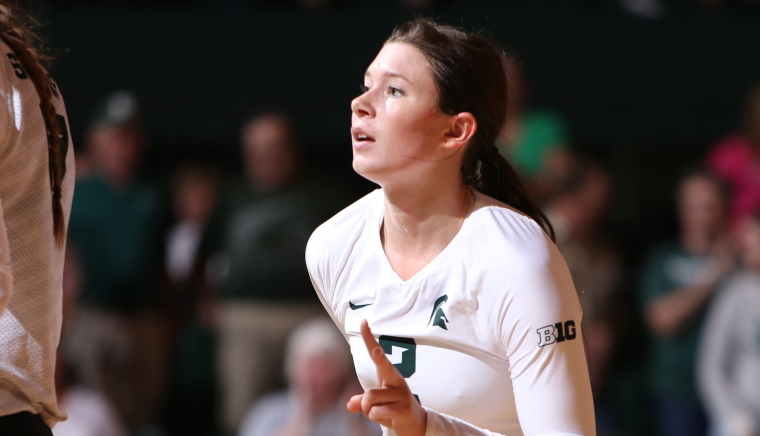 Bailey, who was an AVCA Second Team All-American and VolleyMob Honorable Mention All-American in 2017, is a 5’10” outside hitter originally from Burlington, Ontario. Last season, she led the Spartans with 404 kills and 3.61/set, while hitting at a .279 efficiency percentage (38.0% under the international hitting standard). She also had 30 service aces and 41 blocks for Michigan State as she led the team to the Elite 8 of the 2018 NCAA Championship Tournament.

This summer, Bailey was chosen for her first international tournament with the Canadian Senior Women’s National Team. The squad didn’t play in the 2018 FIVB Volleyball Nations League, but they did play at the Pan American Cup in the Dominican Republic. The squad was eliminated by an American “B” team in the semi-finals before beating Brazil’s “B” team 3-0 in the bronze medal match.

In that bronze medal match, Bailey started at outside hitter and recorded 9 points.

She beat out a tryout roster of 9 outside hitters vying for 4 spots, and earned a spot on the team. Canada hasn’t yet announced their roster for this summer’s World Championships, but Bailey is part of the squad that is currently touring Europe in preparations for the tournament, which included 3 friendlies against Turkey, her future home country, of which Turkey won 2.

She joins a team that plays in Turkey’s top league, the Venus League, where they finished in 8th place out of 12 teams last season with a 9-13 record.

Prior to Michigan State, Bailey started her collegiate career at Marquette, where she was named the Big East Freshman of the Year.