Minnesota Brings on Six Freshmen in 2017 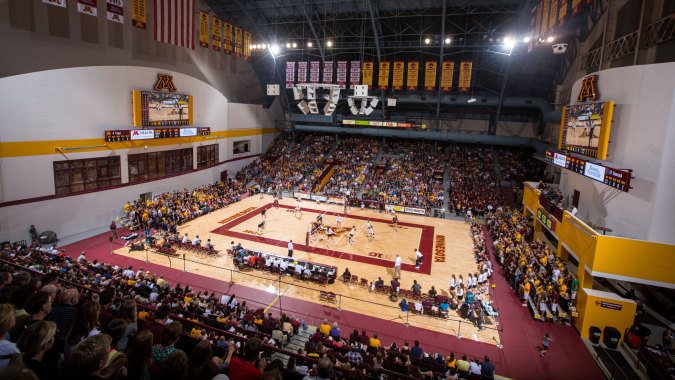 After a 29-5 season, Minnesota went to its second straight Final Four in 2016. It won’t be a year of rebuilding for the Golden Gophers, but they do have a lot to replace. They’ll try to do so with some talented freshmen – six of them to be exact.

Four of the incoming freshman were named to the Under-Armour All-American list: Stephanie Samedy, Sydney Kleinman, Jasmyn Martin and Sara Nielsen. The other two coming in are Lauren Barnes and Alice Zeimann.

“We are so excited to welcome this wonderful group of student-athletes to the Golden Gopher Volleyball program,” Minnesota head coach Hugh McCutcheon said in the Minnesota release. “It’s a class with a vast amount of depth, talent and character. They will be great representatives of this program and our University.”

Stephanie Samedy, a 6’2″ right side, was ranked as the fifth best recruit in her class by PrepVolleyball and was first team on the Under-Armour All-American team. She has experience with the USA Youth National Team and the USA Junior National Team. Originally from East Ridge High School in Florida, Samedy will look to make an impact as she moves up north for her first year.

Joining Samedy is Sydney Kleinman, a 6’2″ outside hitter from Frisco, Texas. Kleinman was part of the Second Team Under-Armour All-American list and was ranked as the 44th best high school senior by PrepVolleyball. In her four year career at Wakeland High School, she was a two-time all-state selection in addition to being all-conference four times.

Kleinman isn’t the only outside hitter in the class, as Jasmyn Martin adds to the incoming firepower. At 6’3″, Martin provides length up front like Samedy and Kleinman. She was a Second Team Under-Armour All-American and was ranked 16th for high school seniors by PrepVolleyball. After missing all of 2015 with a back injury, Martin responded with an all-state season in 2016. She would’ve been difficult for the Golden Gophers to miss out on after being a starter at Hopkins High School in Minnesota since eighth grade.

Sara Nielsen rounds out the quartet of Under-Armour All-Americans, as she received honorable mention status. A 5’11” setter, Nielsen could one day be the distributor to the talent joining her in the 2017 recruiting class. Originally from the state of Illinois, she was a first-team all-state selection in addition to being ranked as the 69th best recruit by PrepVolleyball.

Lauren Barnes also hails from Illinois and although she wasn’t on the Under-Armour All-American list, she still garnered plenty of accolades. The 5’6″ defensive specialist was a PrepVolleyball Preseason All-American and was all-conference in 2016. Barnes played 12 years of hockey before giving it up to simply focus on volleyball, showing the toughness that she will bring to the defensive side of the court.

Last but not least is Alice Zeimann, a 6’0″ outside hitter from New Zealand. She was a two-time Senior Women’s Team member and has appeared on countless youth national teams for New Zealand. In addition to her indoor success, Zeimann also won silver at the Asian Beach championship this year.

The six newcomers will look to offset some big losses for Minnesota. The leader of that bunch is Sarah Wilhite, the AVCA National Player of the Year last season. The Golden Gophers also lose Hannah Tapp, who was AVCA Second Team All-America in addition to her sister Paige Tapp.

Even with the loss of some big names, Minnesota should prove to have a nice blend of young talent with some returning stars. Setter Samantha Seliger-Swenson returns for her junior season after being named AVCA First Team All-America as a sophomore. She will keep the offense running at a high level, along with Alexis Hart who is back for her second year after the outside hitter earned AVCA Honorable Mention All-America as a freshman. Middle blocker Molly Lohman joins the party of returning studs, as she earned the same honors and will be back for her senior season.