Minnesota Hits .500 In Sweep of Rutgers, Tuneup for “Big Game” 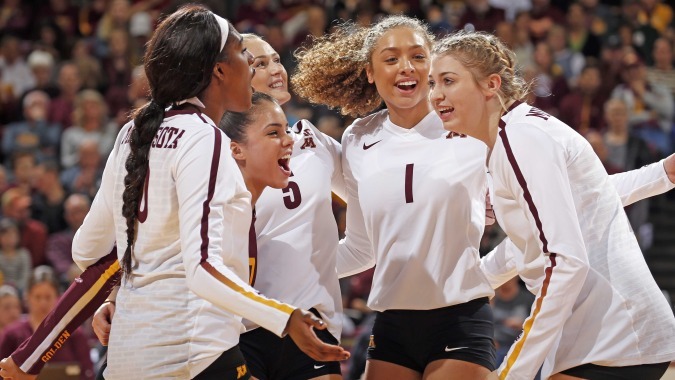 In a Friday-night tuneup for their big Saturday matchup against Penn State, Minnesota put up a dominant offensive performance. Current Photo via Penn State Athletics

If #7 Minnesota needed a last-minute confidence boost before their big showdown against #1 Penn State on Saturday, they got it. The Golden Gophers hit .500 in the game – their second most-efficient night of the season with 47 kills and just 8 errors. That’s the 2nd time in their last 4 games that they’ve hit over .500 (.518 against Indiana), though in between their performances were not as good (.254 against Northwestern, .190 against Illinois).

Minnesota’s young and powerful pairing on the outside, freshman Alexis Hart at OH and freshman Stephanie Samedy led the way with 14 kills each. Samedy’s came on just 18 swings (.667 hitting percentage), while Hart needed 27 for her total (.407 hitting percentage). Excluding the setter Samantha Seliger-Swensen, every Minnesota player who had an attack hit at least .333, and 6 of the 7 hit over .400.

Minnesota also had 8 aces (to just 2 service errors), including 3 from Molly Lohman, 2 from Seliger-Swenson, and 2 from Dalianliz Rosado.

In spite of the lop-sided result, Rutgers hit .181 – about as high as a team can in a game where they only score 42 points (and is actually their highest hitting percentage in their last 10 games). Rutgers will have one last chance to avoid a winless Big Ten season on Saturday evening against VolleyMob-#18 Wisconsin in Madison.

But Saturday’s biggest matchup, one that could determine if Penn State shares the Big Ten title or not, will come at 7:30 Eastern between Minnesota and Penn State, live on the Big Ten Network.

This rally got the crowd going at the Pav. ?? pic.twitter.com/RbrUhJtwlp

Samedy is on ? She just registered her 14th kill of the match! The #Gophers lead the Scarlet Knights 17-12. pic.twitter.com/5MlpKQVIBZ

A kill from Samedy puts the #Gophers up 12-8! pic.twitter.com/vYekEVXVmR

We see you Pittman? A huge swing from #21 ties up the set 4-4. pic.twitter.com/uZlnqrC3NH

As a team, the Gophers had eight services aces, three of which came from Molly Lohman. Minnesota hit .500 and had 47 kills to lift the team to the three set victory.
Minnesota returns to Maturi Pavilion tomorrow to take on top ranked Penn State. The match will be shown live on the Big Ten Network at 7:30 p.m.

Second Set: The Gophers had four aces and hit .579 to take the second set, 25-8. Minnesota opened the second set with a 10-3 kill off an overpass kill from Pittman. Rutgers called a timeout after back-to-back aces from Lauren Barnes and a 13-4 lead. A Hart kill later put the Gophers up, 17-6, while a Samedy kill put Minnesota up, 19-8. A Hart kill put the Gophers up, 21-8, which led to a Rutgers timeout. Hart finished off the set with a kill to take a 2-0 lead.

Third Set: Trailing early in the set, Minnesota took the lead for good at the 6-5 mark of the set. The Gophers took a 14-8 lead off a Hart kill, which caused Rutgers to call a timeout. Samedy later put the Gophers up, 16-10 off a kill, while Pittman pushed the score to 18-12. Taylor Morgan added a kill at 20-14. Minnesota went on a 5-2 run to finish off the set and the match, 3-0.

MINNEAPOLIS, Minn. (Nov. 24, 2017) – Rutgers volleyball continued its string of four straight Top 15 opponents to close out the season with a straight-set loss at No. 8 Minnesota on Friday evening at Maturi Pavilion.

Sophomore middle blocker Stasa Miljevic tied a career high for blocks in a Big Ten match with five, while reaching five kills in a match for the 15th time this season, finishing with six on a .267 hitting percentage. Junior outside hitter Sahbria McLetchie paced the Scarlet Knights in kills for the 13th time in 2017 with eight against Minnesota. Sophomore setter Megan Sharkey made her return from a three-match absence with 25 assists, a kill, three digs, a block and two service aces.

Set 1 | Minnesota 25, Rutgers 18
The opener saw seven tie scores and five lead changes before Minnesota eventually took control. Sharkey started the match off with an ace, then passed out assists on kills by freshman opposite hitter Beka Kojadinovic and McLetchie. Kojadinovic added an ace while McLetchie and freshman Kamila Cieslik combined on a block during a 4-0 run to give Rutgers a 7-5 lead. Minnesota broke away with a 7-0 spurt to lead 18-11. RU picked up another ace and a block down the stretch, and Cieslik ran her kill total for the opening set to four, but the Gophers’ lead held strong.

Set 2 | Minnesota 25, Rutgers 8
The Gophers used an early 7-1 run to pull away after Rutgers got on the board with kills by freshman outside hitter Yana Kamshilina and Miljevic. Leading 10-3, Minnesota had their run broken by another Cieslik kill, but quickly regained momentum with another run of 6-0 to go ahead 16-4 before closing out the frame with eight straight points.

Set 3 | Minnesota, Rutgers
Miljevic had a strong hand in an early RU 3-1 lead, as the sophomore assisted on two blocks and bounced a kill from Sharkey’s set. Three separate 3-0 runs by Minnesota put the home team up 14-8. The Scarlet Knights managed one more run of two points around McLetchie’s eighth kill, but the Golden Gophers took five of the final six points to complete the sweep.