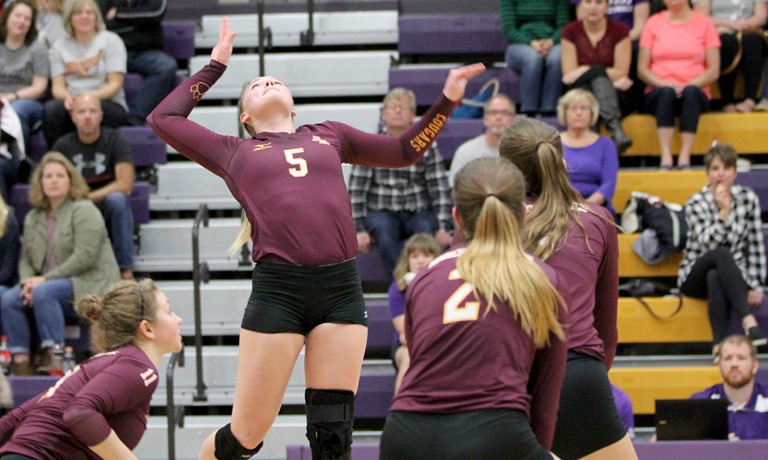 Despite a bad offseason diagnosis, Minnesota Morris' Marissa Ekness is out on the court carrying the team once again this season.  Current Photo via Minnesota Morris Athletics

Despite a bad offseason diagnosis, Minnesota Morris’ Marissa Ekness is out on the court carrying the team once again this season.

Back in February, Ekness was looking forward to the offseason and training for the 2017 season, when she went to the doctor to check out a mole on her back. The diagnosis came back as melanoma, a type of skin cancer. Later, Ekness had another biopsy performed, this time on a lymph node in her armpit – which came back positive as a tumor. The lymph nodes were removed from the armpit and a Jackson-Pratt Drain was inserted for two weeks to drop the chances of lymphedema developing.

The diagnosis and treatment that went along but a huge drain on Ekness and her training, keeping her in bed for about three months not able to do much on her own.

The team’s head coach, Lauren Torvi wanted to make sure that Ekness’ health was in check before any volleyball talk came into the picture.

The summer continued and Ekness began to regain some of her mobility and to do things on her own again. By the end of July, Ekness started light exercise and prior to preseason had another mole removed from her back. This has limited her throughout practices to start the season but ultimately did not stop her.

The team is currently 3-2 to begin the season with Ekness putting down a team-best 75 kills so far on a .205 hitting percentage and averaging 3.75 kills per set.

Ekness is not out of the woods yet, still having to get full body scans every three months and CT scans, PET scans and brain MRI’s every four months.