No. 3 Minnesota Moves to 6-0 With Sweep of Denver 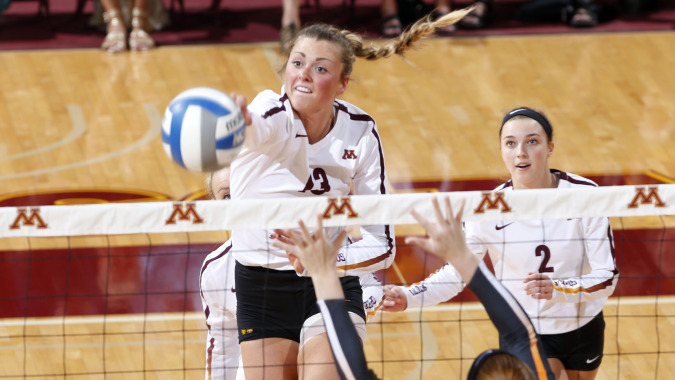 No. 3 Minnesota  used an efficient hitting effort and 12 blocks to register a sweep of Denver, handing the Pioneers their first loss of the season. Current Photo via Minnesota Athletics

AUSTIN, Texas – No. 3 Minnesota (AVCA 1)  used an efficient hitting effort and 12 blocks to register a sweep of Denver, handing the Pioneers their first loss of the season.

Minnesota opened up the match with a 14-7 lead, including a pair of five-point rallies. The Gophers led by eight at 20-12 and cruised to the 25-16 win with help from a pair of Samedy kills and a Denver miscue.

Denver led 8-6 in Set 2, which featured six ties and three lead changes, but Minnesota turned the tables with five straight points. Kills by Lohman and Hart helped the Gophers to the 11-8 advantage. UM upped its advantage to six at 21-15 and won the stanza on a Pittman putaway.

The Gophers put up six stuffs in the final 25-13 win. Minnesota started fast with a 5-0 run, including a Seliger-Swenson ace, and built the lead to eight at 11-3. A pair of blocks made it 15-8 Gophers and eventually the team scored seven straight to close out the sweep.

The University of Minnesota improved to 6-0 this season when it earned a 3-0 win over Denver, today, in Austin, Texas, in conjunction with the American Campus Classic (hosted by Texas). The Golden Gophers defeated the Pioneers, 25-16, 25-19, 25-13, in the first of six matches during this four-team tournament.

Minnesota was led by Stephanie Samedy who had 10 kills, while Alexis Hart had nine. Molly Lohman added the team’s best hitting clip at .462 when she had seven kills and added a team-best eight blocks. Samantha Seliger-Swenson had 34 assists and 12 digs for her first double-double of the season and added three aces. Dalianliz Rosado also had 12 digs, an ace and five assists. As a team, Minnesota hit .292 to Denver’s .066, held a 49-38 dig advantage and outblocked the Pioneers, 12-6.

The Gophers had a quick turnaround as they compete again tonight, 5 p.m., against Texas A&M Corpus-Christi.

First Set: Gophers hit .344 in the first set to win, 25-16. Minnesota opened up the first set with a 5-0 run and forced Denver to call a timeout. As Denver cut the Gopher lead to 9-7, Minnesota responded with a 5-0 run, which forced the Pioneers to call their second timeout. A combined block from Lohman and Hart pushed the Gopher lead to 11-7, while Lohman provided a kill the 14-7 advantage. The Gophers were able to get six points off Rosado’s serve rotation. Minnesota continued to add the pressure and pushed the lead to 20-12 off a Samedy kill. The Gophers pushed the score to set point off a Samedy kill, while Denver committed a ball handling error for Minnesota to go up, 1-0.

Second Set: Minnesota hit .424 in the second, while it limited Denver to a 15.4 percent for a 25-19 set win. Denver took an early lead at 8-6, but the Gophers went on a 5-0 run to push ahead for an 11-8 lead as the Pioneers called a timeout. Back-to-back kills from Lohman tied the set at 8-8, while she and Samedy combined for a block. A Hart kill pushed the Gophers lead to 11-8 as DU used its first timeout. Minnesota continued to add to its lead after a 17-12 lead from Martin and Pittman. A Hart kill later pushed the Gopher lead to 21-15, while Samedy added set point. The Gophers went up, 2-0, after a Pittman kill.

Third Set: Minnesota used six blocks in the third set to win it, 25-13. The Gophers opened the third set with a 5-0 run as Seliger-Swenson added her second ace of the match. Minnesota continued to cruise and built up an 11-3 lead off a Pittman block as it forced the Pioneers to call their second timeout. Minnesota added back-to-back blocks, one by Seliger-Swenson/Lohman, another solo by Lohman for a 15-8 lead. Lohman also later added an ace for a 19-10 lead. Minnesota pushed it to set point off a long rally finished off with a Pittman kill. The Gophers closed out the match off a Denver attack error to go up, 3-0.

The University of Denver women’s volleyball team fell to the No. 1 ranked Minnesota Gophers (6-0) in straight sets (16-25, 19-25, 13-25) Thursday morning at the American Campus Classic, its first loss of the season.

Kayla Principato and Teal Schnurr led the Pioneers (6-1) with seven kills, while Becca Latham added six kills in her homecoming.  Piyusha Boteju and Ellie Anderson paced the Pioneers in the assist category with 11 and 10, respectively.  Boteju also recorded a service ace in the match, one of two that Denver tallied overall (Olivia Novotny recorded the other).  Tina Boe registered one solo block and three assisted blocks to lead DU in total blocks, and Cassidy Rooke had the most digs in the match for Denver with 12.

Set One:  Denver got out to a slow start, with the Gophers scoring the first five points of the match, prompting a timeout by the Pioneers.  The Pioneers recorded its first point off of a service error by Minnesota, and then made it 5-3 on two more errors by the Gophers. Denver got as close as 7-5 early on with a kill from Principato, but Minnesota went on a 7-2 run (kills by Rooke and Latham) to make it 14-7, leading to another DU timeout. As the set progressed, the lead fluctuated between seven and eight, although at one point the Pioneers cut it to six at 21-15 and 22-16, but the Gophers ultimately took the set 25-16. DU hit .194 in the set, with three kills by Latham, two assists each by Rooke, Boteju and Anderson, and Boe leading the team in total blocks with two (one solo, one assisted).

Set Two: This was the closest set in the match, with six ties and three lead changes, ending with Minnesota taking the set 25-19. Boteju opened up the set with a service ace, and Denver leading 7-5 and 8-6 early on, but the lead didn’t last long as the Gophers went on 5-0 run to make it 11-8 in its favor to take control of the set. Denver pulled as close as 13-11 and later 15-12, but ultimately, Minnesota kept a comfortable cushion before taking the set 25-19.  Emma Willis, Schnurr and Principato had three kills apiece in the set to lead the Pioneers, while Anderson and Boteju once again led the team in assists with five each. Novotny added an ace to make it 7-5 Minnesota, her third of the season.  The Pioneers had four assisted blocks in the set, with blocks from Cassie Baird and Boe and Principato and Willis. As a team, DU hit .154 with 13 kills.

Set Three:  Like the first set, Minnesota scored the first five points of the set, which led to a DU timeout.  Willis scored the first point of the set for the Crimson and Gold off of a kill, but the momentum resided with the Gophers throughout the set. Minnesota scored the last seven points of the set to close out the match 25-13.  The Pioneers only recorded seven kills in the set, with Latham, Schnurr and Principato each having two. Willis had the other kill. Boteju led in assists with four and Anderson had the remaining three assists. Baird and Boe once again teamed up to register a block, the lone one for DU in the set.  Rooke had eight of the team’s 17 digs to lead in that category.

UP NEXT: The Pioneers will play host Texas, who is ranked No. 5 in the country, at 6 p.m. MT tonight.  The match will be broadcast live on the Longhorn Network.