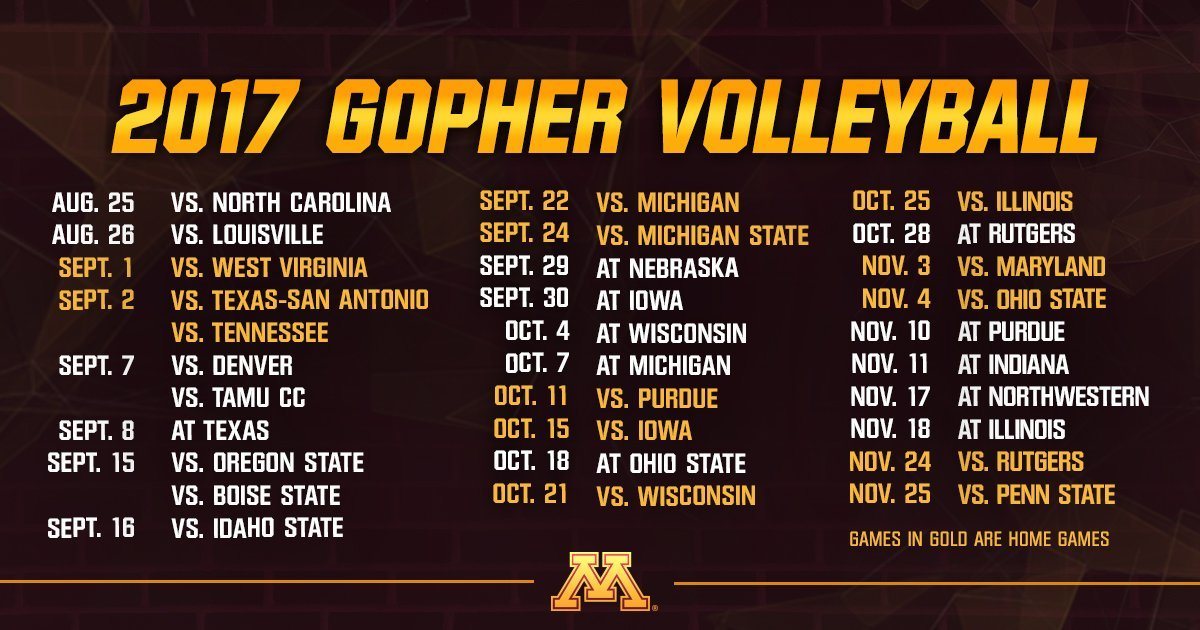 The Minnesota Golden Gophers will play 12 teams that qualified for the 2016 NCAA Championship in 2017, including 7 from... Current

The Minnesota Golden Gophers will play 12 teams that qualified for the 2016 NCAA Championship in 2017, including 7 from the Big Ten.

The team will open up its season at the Big Ten/ACC Challenge, where they’ll face the last two ACC conference champions, North Carolina and Louisville, in their first two games of the season.

After a relatively lowkey Diet Coke Classic run (Minnesota hosted) aganst West Virginia, Tennessee, and UTSA, the Gophers will go to the Texas Tournament in Austin. The highlight of that trip wlll be a September 8th matchup against the defending NCAA runner-up Longhorns.

While there are rarely any light spots in a Big Ten schedule, Minnesota, by-and-large, has a front-heavy campaign this year. Beginning on September 22nd by hosting Michigan, 8 of their first 10 Big Ten matches this season are against teams who made at least the second round of the NCAA tournament last year. Included on that list are both of the team’s huge rivalry games with Wisconsin, who went to the Elite 8, and their lone game against Nebraska, who played its way to the Final 4 last season.

After that stretch, Minnesota will get a reprieve in the back-half of their schedule. Between Illinois, Rutgers, Maryland, Indiana, and Northwestern, 7 of their last 10 matches are against teams that missed the NCAA tournament last season.

In 2016, Minnesota finished 2nd in the Big Ten with a 17-3 conference record, and were 29-4 overall. They were knocked out of the NCAA Championship tournament in the national semi-finals against Stanford, who went on to win the title. The Gophers then graduated one of the best senior classes in program history, including national player of the year Sarah Wilhite, Senior CLASS Award winner Paige Tapp, and her twin sister and All-American Hannah Tapp.

Among the key contributors returning from that Final 4 team, though, is setter Samantha Seliger-Swenson, efficient 6’3″ middle blocker Molly Lohman, and sophomore outside hitter Alexis Hart, who ranked 2nd on the team in kills as a rookie last season.