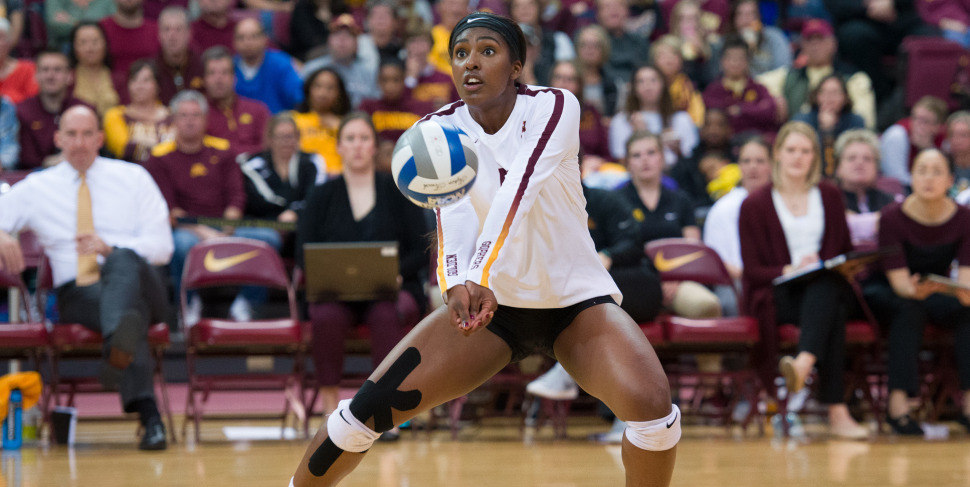 Week 11 of the 2017 NCAA Women's volleyball season has brought in some strong performances around the country in a number of the top conferences.  Current Photo via Copyright Christopher Mitchell / SportShotPhoto.com

Week 11 of the 2017 NCAA Women’s volleyball season has brought in some strong performances around the country in a number of the top conferences.

Minnesota’s Stephanie Samedy of the Big Ten Conference out-did herself this week, claiming the Player and Freshman of the Week for the conference. For the week, Samedy posted 5.2 kills and 3.3 digs per set along with a .418 hitting percentage in the team’s sweeps over Maryland and Ohio State. Along with Samedy, Baylor’s Yossiana Pressley nabbed her second consecutive Big 12 Player and Freshman of the Week honors as well, after posting an average of 5.17 kills and 5.47 points per set in the team’s wins over TCU and Iowa State.

Out of the Missouri Valley Conference, Missouri State’s Lily Johnson continues to rip out huge numbers for her team each week, garnering her fifth MVC Player of the Week honor this season. Johnson recorded 5.29 kills, 5.57 digs and 5.71 points per set in the teams home wins over Valparaiso and Southern Illinois.

On the defensive side of things, Illinois’ Brandi Donnelly made a huge comeback to the court this week after missing nearly a month due to injury. In total, Donnelly picked up 41 digs on the weekend for an average of 5.12 digs per set. In 67 reception opportunities, Donnelly made just one error on the weekend. Texas’ Chiaka Ogbogu also eclipsed a Defensive Player of the Week honor as she totaled 19 blocks on the week for an average of 2.11 blocks per set.

Check out the rest of the conference awards earned by the top 14 conferences in the NCAA Division I below.