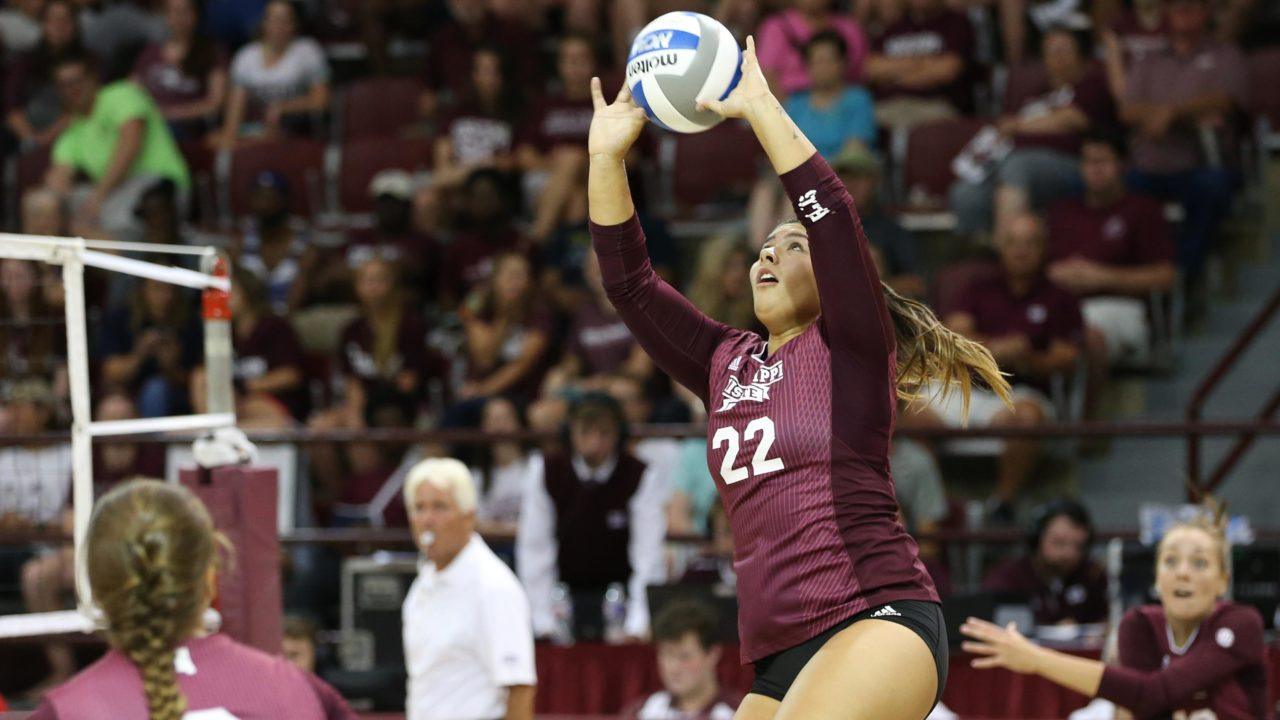 Mississippi State (11-7, 3-1 SEC) is off to its best start in conference play in school history with a five-set victory over Alabama (13-4, 2-2 SEC) on Sunday. Current Photo via Mississippi State Athletics

The Mississippi State Bulldogs (11-7, 3-1 SEC) are off to their best start in conference play in school history with a five-set victory over the Alabama Crimson Tide (13-4, 2-2 SEC) on Sunday.

“That match was amazing all the way around,” Mississippi State coach David McFatrich said in a release after the game. “That is what SEC volleyball is all about.”

Krystal Rivers led Alabama with an impressive 26 kills and .281 average. She added six blocks, six digs, and an ace. Hayley McSparin had a second-best 13 kills. Brittany Thomas had 19 digs, and Shannon Mikesky had 46 assists.

Alabama heads to Auburn next Sunday. Mississippi State will face Kentucky at home on Friday.

STARKVILLE, Miss. — When Evie Grace Singleton‘s final attack hit the ground on Sunday afternoon, it meant much more than just another win for Mississippi State volleyball.

That kill finished off a five-set victory by the Bulldogs (11-7, 3-1 SEC) against the Alabama Crimson Tide (13-4, 2-2 SEC) and in turn earned the best start to SEC play in school history.

“Wow. That match was amazing all the way around. That is what SEC volleyball is all about,” MSU coach David McFatrich said. “To say that this win doesn’t mean a lot to us would be a lie. I’m so happy for these girls, our staff and Mississippi State.”

The Bulldogs saw one of their more complete efforts this season, as four players tallied double-digits kills, while defensively the team tied a season high with 15.0 total blocks.

Leading State was junior Jelena Vujcin, who paced State with 16 kills, while Singleton (14), Emily Hill (13) and Jazmyne Johnson (11) followed close behind. Johnson also turned in a career night on defense, pacing MSU’s blocking tirade with a career-high 11 denials. Singleton also got in on the blocking fun with a career-high 6 blocks.

Sunday got off to one of the best starts the Dogs have put together so far this year, jumping ahead immediately and never relinquishing the lead. The Dogs opened up 5-1 to force an Alabama timeout and kept pouring it on from there, going up as much as nine several times before closing out the set with a 25-15 win.

The second set opened up just like the first, as the Dogs pushed ahead to a 14-6 lead. State once again never let Alabama get out in front and fought off a late Tide rally to secure a 2-0 lead in the match with a 25-21 second-set victory.

However, Alabama would not go quietly. UA’s Krystal Rivers turned on the jets in the third set, tallying 7 kills and a pair of blocks to put the Tide in the driver’s seat. MSU would reel off a 7-1 run to cut the Tide’s lead to 24-22, but could not complete the comeback and relinquishing the set, 25-22.

The match’s fourth set played tight until late, when the Tide made their move out in front. UA picked up seven of the last nine points to force a decisive fifth set, 25-18. From there, the real fun began.

The Crimson Tide pulled out to a pair of three-point leads early, but the Dogs would not be held back for much longer. Johnson reached another level in her play, reeling off a pair of kills and blocks to spark a 6-1 MSU run to put the home team in the lead. Alabama jumped in front one last time, but State would not be denied history.

Taking six of the last eight points, the Maroon and White sealed a 15-12 set win and captured a 3-2 victory against Alabama to seal up the best SEC start in school history.

Along with MSU’s dominance on the attack and block, sophomore setter Blossom Sato also turned in an impressive performance. Her 49 assists set a season high and came one short of tying her career high of 50.

Cheyenne Spell topped the Bulldogs in digs with 19, while Payton Harris followed close behind with 11.

“We do still have some things to work on with our game, especially when you look back at the third and fourth sets,” McFatrich said. “We’ve got to learn how to keep our moxie when we’re up 2-0. But when it’s all set and done, I’m proud of this team. So proud. Now time to get to work for Kentucky.”

MSU will remain at The Griss for the final match of its homestand on Friday against Kentucky. The Bulldogs and Wildcats will square off on Friday, Oct. 7 at 7 p.m. CT, with the action coming on SEC Network +.

With the win on Sunday, the Bulldogs accomplished a feat never before done in MSU history. The 3-1 record to begin SEC play marks the best start in conference action in school history

Sunday’s win also snapped a five-match losing streak to the Crimson Tide. The victory is the first for the Dogs against UA since winning on Nov. 20, 2011 in Starkville.

Blocking has been the weapon of choice for the Bulldogs this season and Sunday was one of the most dominant blocking performances in recent years for State. MSU tallied 15.0 team blocks for the second time this season, the first time MSU has accomplished such a mark since 2014.

Leading the way for MSU were seniors Jazmyne Johnson and Evie Grace Singleton. Both tallied career highs in blocks, with Johnson earning 11 and Singleton capturing 6 denials.

For the first time this season, junior Jelena Vujcin stood atop the kills chart for the Bulldogs at a match’s end. Her 16 kills led the way for MSU, while she also tallied a season-high 17.5 points.

Another match, another dominating showing for Blossom Sato. This time it came in the setting game, as Sato’s 49 assists set a season high and came one short of tying her career high of 50, set last season against South Carolina on Oct. 4.

Junior Payton Harris tallied 11 digs on Sunday and now stands at 1,395 digs for her career and continues to make strides up the MSU record book. She currently holds fourth place on the school’s career digs list and is 38 short of tying for third place. Melissa Kariker (1993-96) holds the school record with 1,707.

The Dogs will close out their home stand on Friday, Oct. 7 against the Kentucky Wildcats. First serve is set for 7 p.m. CT and will be broadcasted on SEC Network +, which fans can access through WatchESPN.com or the ESPN app.

STARKVILLE, Miss. — Alabama volleyball came back from an 0-2 match deficit to force a fifth set on the road Sunday at Mississippi State, but the comeback bid fell short as the Bulldogs held on to win, 3-2.

Mississippi State pushed ahead to an early 5-1 lead in the opening set, forcing an early timeout by Alabama and the Tide had to take its second break shortly thereafter trailing 12-4. Alabama would eventually fight back to cut the deficit in half, trailing 15-11, but Mississippi State would quickly regain the momentum and move on to win the set, 25-15.

The Bulldogs’ momentum carried into the second set, guiding the home team to an 11-4 lead after scoring three-straight points as the Tide took its first timeout. Mississippi State kept its foot on the pedal, moving ahead 19-12 at Alabama’s second timeout and reaching set point at 24-18. The Tide wouldn’t go down easily however, scoring three-straight points to make it 24-21 when the Bulldogs aimed to slow the momentum with a late timeout. A kill on the right side after the break for MSU would end the set at 25-21 and give the Bulldogs a 2-0 match lead at intermission.

Alabama came out of the locker room with renewed energy in the third set, overcoming an early 3-1 deficit with a 10-3 run to lead 11-6 as Mississippi State took a timeout. The Bulldogs would hang close but the Tide remained in front, with a kill by Rivers making it 17-11 as MSU took its second timeout. With Alabama up, 23-15, Mississippi State scored four-straight points to cut the deficit in half and force a Tide timeout. The Bulldogs would draw as close as two points but a kill by Rivers ultimately ended it with the Tide on top, 25-22.

Despite two tie scores early, the Tide would not trail for the entirety of a very close fourth set. Mississippi State took its first timeout trailing 14-11 and would come back to tie it at 14-14 but could not take the lead, eventually taking its second timeout trailing Alabama 21-17. The Bulldogs would score one point immediately after the break but that would be it for the remainder of the set as the Tide scored four-straight to win it 25-18, capped by a service ace by Lawrence.

Alabama started the deciding fifth set on a 3-0 run before Mississippi State answered back with three of its own to tie it at 3-3. Another three-point swing in the Tide’s favor made it 6-3 but the Bulldogs would regain the lead, 8-7, at the halfway point of the set. A kill by Rivers soon after tied the set at 9-9 and an MSU attack error allowed Alabama to regain the lead, 10-9, but it proved short-lived as the Bulldogs swung back in front 12-10 as the Tide took a timeout. Alabama took its second timeout after Mississippi State hit set point, 14-12, and a kill in the next rally gave the Bulldogs the 15-12 set victory.