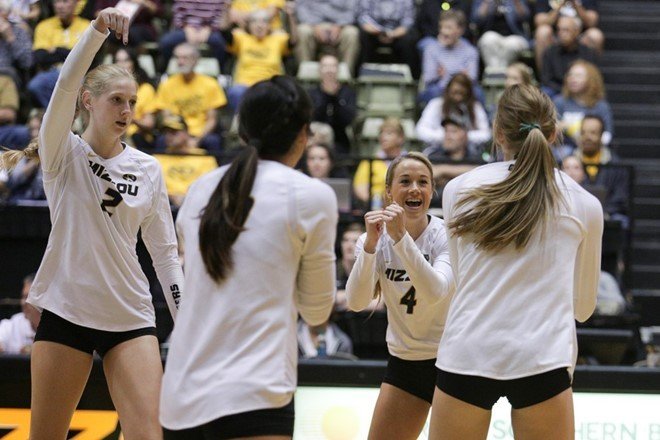 The Alabama Crimson Tide got off to a strong start, leading by two sets, before the Missouri Tigers upped their level of play to win in five. Missouri remains unbeaten in Southeastern Conference play.

The match was incredibly tight. Alabama actually had one more kill than Missouri (66 to 65) and a slightly higher hitting percentage (.238 to .236), but Missouri won more total points (80 to 77). The opponents were dead even in errors and aces, with 26 in the former category and 3 in the latter.

The Tigers relied on three attackers to get the job done. Melanie Crow led her team in kills with 23, while Kira Larson contributed 16, just ahead of Carly Kan’s 15 kills. Kan also had an ace.

Courtney Eckenrode was an integral player for Missouri. She led the match in passing with 57 assists, and was also the only player to record two aces. Alyssa Munlyn established her defensive presence with a match-high 7 blocks.

Leah Lawrence led her team in blocks (5) and had one service ace, while Alabama’s Quincey Gary had the most digs on the floor with 21, and also served up an ace of her own.

Looking ahead, Missouri will host LSU on Wednesday, October 19th, at 7pm (CT). Alabama, on the other hand, will hit the road and play Arkansas later in the week. Their next match is scheduled for Friday, October 21st, at 7pm (CT).

The Tigers struggled across the board in the opening set, dropping their first set in SEC action this season. Mizzou tallied an uncharacteristic 10 attack errors, while Alabama’s defense also produced three total blocks. Crow shined for the Tigers’ offense, recording a team-high five kills on .500 hitting in the opening set.

Mizzou played significantly better in the second set, as it battled to the end with Alabama. The two teams tallied nine ties and four lead changes alone in the set. Mizzou’s defense stepped up with three total blocks, while contributing to six Crimson Tide attack errors. Ultimately, the Tigers let a late three point advantage slip away as Alabama claimed a 25-23 set triumph.

The Tigers and Crimson Tide’s tradition of closely-contested matches continued, as the third set saw 13 total ties and eight lead changes. Mizzou trailed 23-19 in the set, before accumulating an impressive 5-0 run to set up set point. The Tigers had two more set points before finally closing an exciting 27-25 triumph.

Crow and Larson once again paced Mizzou’s attack, tallying four kills apiece in the third set. Freshman Andie Hanus (Omaha, Neb.) played a key role into the Tigers’ late comeback, as she served throughout their before mentioned 5-0 run.

Mizzou’s momentum continued in the fourth set, as it held onto a comfortable lead throughout. The Tigers ultimately tallied a 25-20 set victory with a match-high .387 hitting percentage (15 kills). Crow secured her third 20-plus kill outing of the year after five more kills in the fourth set.

The Tigers tallied eight more kills on .350 hitting in the fifth set, wrapping up their strong attack in the final two sets. Mizzou’s 12.0 total blocks against the Crimson Tide marked its ninth 10-plus total block outing of the season. Sophomore Alyssa Munlyn (Suwanee, Ga.) recorded a team-leading seven total blocks, leading the team in stops for the 14th time in 2016.

Mizzou returns to Columbia, Mo., for a pair of home matches next week. First, the Tigers will host LSU on Wednesday, Oct. 19, with first serve at 7 p.m. (CT). Four days later on Sunday, Oct. 23, Mizzou welcomes Kentucky to the Hearnes Center. First serve is scheduled for 1 p.m. (CT).

Both matches next week in Mid-Missouri will broadcast live on SEC Network.

TUSCALOOSA, Ala. – Alabama volleyball won the first two sets of Sunday’s contest against Missouri but the Tigers rallied to win three-straight and complete the comeback to win the match, 3-2.

Alabama (14-6, 3-4 SEC) won the first two sets, 25-16 and 25-23, and led 23-19 late in the third set but Missouri (16-3, 7-0 SEC) came back to win in extra points, 27-25, and claim the next two sets, 25-20 and 15-12, to complete the comeback. This was the Tide’s eighth five-set match of the season and the fourth-straight between Alabama and Missouri. Individually, Krystal Rivers led the offensive effort with 32 kills while Hayley McSparin hit a career-best .688 with 11 kills on 16 swings with no errors. Rivers andBrittany Thomas both notched double-doubles in the match while Shannon Mikesky finished one dig shy with 53 assists and nine digs.

Alabama got off to a hot start in the first set, scoring four unanswered points to open the frame and eventually pulling ahead 10-3 on a service ace by Brittany Thomas as Missouri took its first team timeout. Leading 11-4, the Tide scored three in a row to take a double-digit lead but the Tigers responded with a 6-1 run to cut the lead in half as Alabama took a timeout leading 15-10. Alabama regained the momentum in the closing stretch, pulling ahead to eventually win by nine points, 25-16.

Missouri’s early 4-1 lead in the second set was short-lived as Alabama quickly tied it up at 4-4 and took the lead at 9-8. The teams continued to battle back and forth with the Tigers on top 15-12 at the media timeout. Alabama continued to keep it close and regained the lead at 20-19 on a Quincey Gary service ace, which forced Missouri to take its first team timeout. Back-to-back points out of the break extended the Tide’s lead to 22-19 and the Tigers quickly burned its final timeout of the set. A 3-1 run by Missouri cut Alabama’s lead to one point as the Tide took its first timeout up 23-22. Alabama reached set point on the next rally, 24-22, but a Missouri kill made it a one-point game again and gave the visitors possession on a crucial point as the Tide took its final timeout. A kill by Krystal Rivers on the next point gave Alabama the 25-23 win and a 2-0 match lead at intermission.

Alabama’s early 7-4 would prove the largest lead for either team in the first half of a tightly-contested third set in which Missouri held a slim 15-14 lead at the media timeout. The Tide rallied following the media timeout, scoring four unanswered points to lead 18-15 and a big slam up the middle by Hayley McSparin made it 19-16 as the Tigers took its first timeout. Missouri’s second timeout came shortly thereafter with Alabama up 21-17 and the Tide took its own timeout later leading by two, 23-21. Two more points from the Tigers tied up the set late 23-23 and forced Alabama to take its second timeout. Missouri reached set point first, 24-23, but a kill by Rivers tied it at 24-24 and forced extra points. The Tigers held on to win the set, 27-25, and avoid the sweep.

Missouri led for the majority of the first half of set four, scoring three-straight points to make it 13-7 at the halfway point as Alabama took a timeout. The Tigers kept the momentum rolling after the break, eventually reaching set point up 24-17 but Alabama kept the set alive scoring three-straight points to cut the deficit to four points, 24-20, as Missouri took a timeout. The Tigers won it on the next point however, 25-20, to even the match at 2-2 and force a deciding fifth set.

After five tie scores early in the fifth, Missouri began to pull away with three-straight points to lead 8-5 at the mid-set switch. The Tigers led by four points at the Tide’s first timeout, 10-6, and eventually pulled ahead 12-6 before Alabama cut the lead in half with three-straight points to make it 12-9 and force Missouri to take a timeout. The Tigers took its second timeout leading 13-11 and the Tide took its second one point later as Missouri reached match point, 14-11. Rivers’ 32nd kill of the match drew the Tide within two points but Missouri ended it on the next rally to win, 15-12, and complete the comeback.